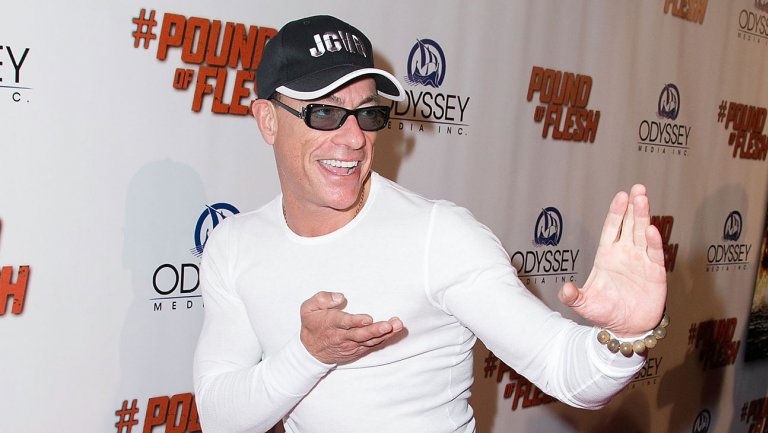 This week: That time Jean-Claude Van Damme kicked a UFC fighter in the teeth, Former college football player turned MMA fighter dishes on which sport is safer, the latest on Floyd Mayweather/UFC talks, and a very special holiday album from a UFC fighter!

With 40 pro fights over a span of more than a decade, UFC lightweight Jim Miller is likely winding down his excellent career. Like most smart athletes, Miller looks to be planning ahead for the inevitable day when injuries or father time take away his MMA career. We have some video of what’s next for Miller after he hangs up the 4oz. gloves.

I never thought I could be a bigger Jim Miller fan, but here we are. He had honey in his voice for that set!

Which is Safer: Football or MMA?

When people tell me they don’t like MMA because it’s too brutal, I usually ask if they enjoy watching football. Most people respond in the affirmative, at which point I begin to explain with detail why football is much more dangerous than MMA. Former Alabama linebacker Eryk Anders successfully made the transition from the gridiron to the cage and this week on The MMA Hour, he offered his thoughts about the danger of both sports.

“You see guys at 30 years old, their career is done just because of all the hits, all the contact. Just look at the shelf life of the average NFL player, three to five years if you’re lucky; MMA guys, they can play for much longer as long as they’re not one of those guys who play with their hands down and just chuck for the fences and take it to give it.”

Take it from a man who has played and excelled at both sports. Next up for Anders is a fight against former UFC champ Lyoto Machida.

I know we all thought we were done with the Floyd Mayweather vs. (insert UFC fighter) talk, and maybe now we can finally shut the door on it. The big rumor of the week was that Floyd asked Dana White to get him a multi-fight deal in the UFC.

“I don’t look forward to getting back in a boxing ring, that’s what I don’t look forward to,” Floyd told FightHype. “I’m just saying I could — I’m not doing it — but I’m saying what I could do to make a billion dollars quick, if I wanted to do that. That’s what I was saying. I never said I was gonna fight in the UFC. I didn’t say that. I said if I wanted to and what I could. Could and would do is different things. I’m not gonna do it, though.”

So it’s all over then? Whoops, hold on now…

@floydmayweather ? vs ? I’ll move up 20 pounds to welcome you proper pic.twitter.com/R400vMz0dX

Demetrious “Mighty Mouse” Johnson is the UFC flyweight champion and considered the best pound-for-pound fighter in MMA. He has an idea for a fight with Floyd. It would take place in the UFC, but no grappling would be allowed.

Maybe now all the Floyd/UFC talk is over. Nah, probably not.

Former UFC bantamweight champion Cody Garbrandt told an amazing story on Mike Swick’s podcast. Jean-Claude Van Damme came to Team Alpha Male to train with the boys, but it got a bit weird. Like really weird.

After explaining how JCVD warmed up for precisely 38 minutes, Garbrandt said the martial arts film legend was demonstrating kicks to his teammate Chris Holdsworth. Then it was Garbrandt’s turn.

“He was like ‘I want to show you this kick.’ It was kind of a variation on the teep and you twist it at the end. So I do it like three or four times on him. I put it down and then got in this fight stance and I saw in his eyes like ‘You wanna go?’ And I was back against the cage. So he started playing with me, acting like he was going to throw some kicks, and he started throwing hands like slapping at me.

“I was like ‘I’m going to rip his head off, but it’s Jean-Claude — what are you supposed to do?’ “All of a sudden he looks at me, drops to his knees and starts crying and is like ‘My champion!’ and starts crying like that, so I felt hella awkward. Hands on my hips, I’m mad, my lip is all busted open and I got that hot sweat, so I just looked at him and I’m like ‘Jean…’ – I kept calling him Jean, I didn’t know it was Jean-Claude – so I walked out of the Octagon, just leave the place, left the gym. It was f***ed up; everyone was watching, taking videos, so from the outside it looked like I hit him and he was crying.”

This seems like a bit from a comedy movie or parody, something you’d find from the Funny or Die site. Check out the rest of the story on the Real Quick with Mike Swick Podcast.

Fight fans were treated to a free UFC card last week and Italy’s Alessio Di Chirico brought the thrills. He landed a knee that ended the night for Oluwale Bamgbose, who fell face-first into the canvas after eating the knee square on the jaw.

That was a huge win for Di Chirico, who was 1-2 in the UFC prior to last weekend.

Michael Bisping is a fun listen on his Believe You Me podcast. He railed on GSP relinquishing the middleweight title he just won by beating Bisping.

“He’s a prick. He’s a prick, God bless him. I’m gonna be brutally honest here, it’s a double-edged sword. It’s a good thing and a bad thing. By the way, Dana White threw me under the bus when he first found out. He wasn’t happy with Georges and he said, ‘Yeah, well he cherry-picked Bisping.’ That doesn’t do me any favors! He didn’t cherry-pick me, but I did say that. I said Georges wanted to fight me because he thought I was an easy fight and this and that, and he got the win, and then he vacated the belt. Now he vacated the belt because apparently he had to go to the hospital after our fight and he thought he was gonna be paralyzed and he had a bad neck and all this type of stuff. I don’t know. He just doesn’t fancy doing it again.

“In one respect, it’s good for me because – as an MMA fighter, as a boxer, whatever it is – if somebody beats you, you never want them to lose again because if they get beat, then the person that beat them, it has a negative impact on you. Like, ‘Oh, they could have beaten me as well.’ So he’s never going to fight at 185 again, that’s good. I’m the only person at 185 he ever beat, nobody at 185 is ever gonna beat him. So cheers Georges, thanks for that. But at the same time, it looks like a bit of a b**** move, you know what I mean? So there’s pluses and negatives.”

Bisping is set to have one more fight in his native England early next year and then retiring from fighting.

We love dirty laundry, especially when it’s broadcast for all the world to see on social media. Bruce “Pretty Boy” Boyington was hot after learning he had been cut by the PFL, formerly known as the WSOF.

PFL tells us wait till Jan 2018 when we have lot more fights..I wait all year long and then tells me I'm not making cut. This is what's wrong w sport mma @carlossilva BS!! Lawsuit is coming

PFL done me dirty and I'm pissed. Just had me sit and wait all year at top of my career just to tell me we don't need you! 3 fights left on contract. Fought Champion last fight

PFL president Ray Sefo fired back, and it was glorious:

Bruce stop making yourself look like an ass, the facts are you’ve lost your last 3 fights 2 by stoppage your record is 14-11 and you didn’t make the cut for the final 12 for the season… https://t.co/9vnwSulDPR

Game over, man. Game over!

We are MMA-less this weekend when it comes to the major promotions. But you may be familiar with Rizin, which is trying to fill the void in Japan since PRIDE FC was bought out by the UFC. They are in the midst of their bantamweight tournament and the next event takes place Dec. 29.

The main event will feature former UFC contender Ian “Uncle Creepy” McCall against Portugal’s Manel “Prodigio” Kape, and that is our MMA Nickname Battle of the Week. There’s nothing fancy about Kape’s nickname, which translates to “prodigy,” but his game is more than notable. He’s won six straight fights including a sick head kick KO in round one of the tournament, so McCall will face a tough test.

McCall received his disturbing Uncle Creepy nickname from a friend’s son. That youngster would call him Uncle Ian, but one day called him Uncle Creepy and it stuck. That’s really all I want to know about that situation. McCall hasn’t fought since January 2015 and he also fought just once in 2014. He’s been beset with injuries and more, so here’s hoping good ol’ “Uncle Creepy” gets a win next week.