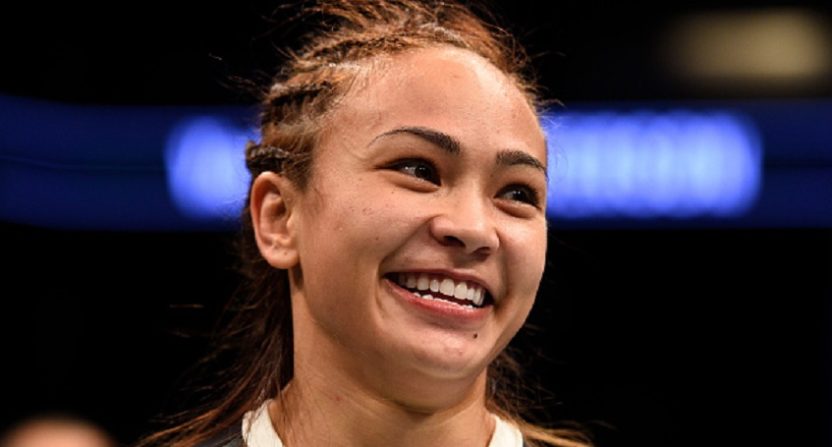 This week: Jon Jones fondly recalls his coke days, Rumble gets into the legal weed biz, MMA racial humor, the world famous MMA Nickname Battle of the Week and more!

Michelle “The Karate Hottie” Waterson has it all: amazing MMA skills, a killer smile, and a terrific sense of humor. She reposted a joke on her Facebook page that included her and made fun of a particular ethnic stereotype.

Ah, good ol’ yesteryear. When we were able to celebrate our differences with humor and all still get along. What a concept.

Cocaine Is a Helluva Drug

Daniel Cormier and Jon Jones continued their war of words this week at the UFC summer kickoff presser, and they didn’t disappoint. Dig this back and forth:

Jones had a good point, but DC fired back.

“Who are you to say who’s the champion? You’re some guy that doesn’t even fight. You’re damn near retired, son. You’re barely coming back. How are you going to tell somebody something, you’re a retired man. Shut your ass up.”

Then DC let loose the MOAB.

Jones looked back on those days fondly and unleashed the ultimate burn.

“I had two great back-to-back weekends: Cocaine one, your ass the next. It was great. That’s a month for the ages.”

We need a half-hour with these two every week until they do battle at UFC 214 on July 29.

Don’t Talk About My Mom

The DC/Jones banter was great, but Kevin Lee got Michael Chiesa all bothered by mentioning his mom. (NSFW)

Chiesa apologized in a video after the press conference ended. But he added this gem:

“If that cheap shot he landed on me was any indication of anything, he’s in deep s–t. Safe to say that guy couldn’t punch his way out of a wet paper bag.”

Those two will throw down June 25 in OKC.

Awww, It’s Conor and His Son

Let’s go get some boxing ones now son.

There will be no boxing belts for Conor. But there will be loads and loads of money. That kid will have gold-plated diapers encrusted with diamonds. Also, I don’t own a robe but I would if I could have that one. I’d be going to the mall in that thing, out to dinner. That robe is lit.

Love Is In the MMA Air

? She asked, I said YES!!!! #Engaged —- Our love began unexpectedly. It started as a crush and grew into an amazing love. In this moment you made my dreams for us come true. Everyday you show me a love so true and pure. I am blessed to wake up to you every morning and fall asleep in your arms at night. I can’t wait to become Mrs. Pennington. ?? I love you with my everything!! Always! @raquel_pennington

Congrats to them both. I just wish they were in the same division so we could see the first spouse vs. spouse match in UFC history.

Jessica Andrade fought Joanna Jedrzejczyk for the strawweight title and came up short, but she scored a big win after the fight when she proposed to her girlfriend Fernanda during her post-fight interview with Joe Rogan. Fernanda said yes.

From the Cage to the Chronic?

UFC light heavyweight Anthony “Rumble” Johnson recently retired and there was a lot of speculation that he would be joining the NFL’s Rams in some capacity. It turns out that Rumble has a different kind of business in mind. He appeared on Booker T’s Heated Conversations to talk about it.

“We’re opening up a facility, if you know what I mean. It’s for medical uses. We got some good things going on. It’s already big. We’re just waiting for that law to pass and whenever it passes, we’re golden. We’re playing our cards right, we’re playing by the book, so that way there’s no issue.”

No word on if Rumble will be handing out free samples.

Demetrious “Mighty Mouse” Johnson is possibly the greatest mixed martial artist of our time. Unfortunately, he doesn’t move the needle very much and isn’t a very viable pay-per-view headliner. DJ is calm and unoffending in most of his interviews, but he let loose on MMA fans, Ronda Rousey, Conor McGregor, CM Punk, and more in an interview with ESPN the Magazine.

When asked if he feels that fans appreciate his greatness, Mighty Mouse did not mince words.

He also said Ronda Rousey had “one move,” and ripped CM Punk getting a big payday with the UFC. Good for you, DJ.

Former middleweight champion Luke Rockhold has been a big bag of sour grapes since losing his belt to Michael Bisping. But he made some good points earlier this week after White said this about him:

“The guy just got knocked out in the first round by Michael Bisping and he thinks he deserves this and he deserves that. You earn it. You want to come back and you want to fight for the title? Get back in here and earn it. That’s it.”

Rockhold turned White’s own words against him.

@danawhite "You have to earn your way in this company"? Tell me how did GSP earn a middleweight title shot? Think before you run your mouth

But then White fired back.

MMA, the best soap opera in the world.

There is some good news for Rockhold, though. After the GSP fight with Bisping was called off, the UFC tried to book Yoel Romero to fight Bisping for the title. But Bisping says he injured his knee and won’t be able to defend his title for a while.

That led the UFC to consider an interim title fight in which Romero would be one of the challengers. The other is said to be Robert Whittaker, aka “Bobby Knuckles.” But injuries happen and fights fall apart all the time. Rockhold could get a shot at Romero and that would be amazing.

Former UFC fighters Paul “Semtex” Daley and Rory “The Red King” MacDonald do battle at Bellator 179 in London on Friday, and the event can be seen on delay Friday night on Spike. Daley is known as “Semtex” due to the enormous power he possesses in his punches. Semtex is a volatile explosive.

Apparently, the name Rory means Red King in Irish/Gaelic, so MacDonald switched to that nickname after being know as “Ares” for many years. This is MacDonald’s first fight in Bellator and Daley is a walking highlight reel. Don’t miss this one!