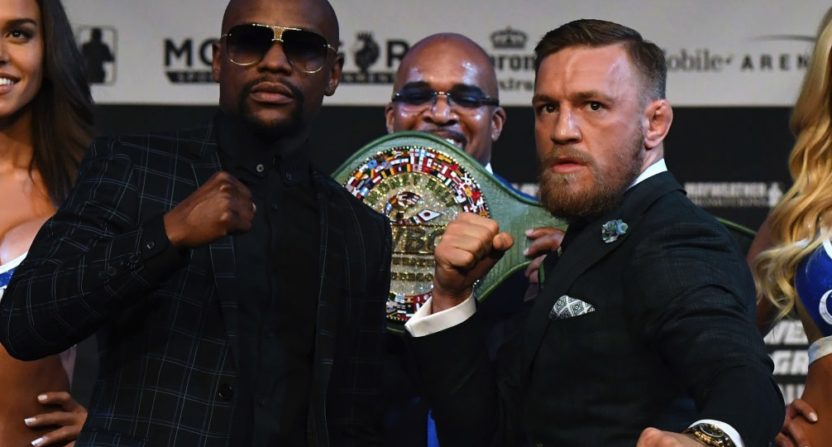 This week: Mayweather vs. McGregor mania as the big fight is finally here! Plus, really, Jon Jones? And Daniel Cormier’s coach has a new, unflattering name for Jones!

The Money Belt Has Diamonds For Days

Fight fans have held disdain for the multiple boxing commissions since forever, but one thing the WBC knows how to do is make a killer belt. The MayMac winner will take home “The Money Belt,” which contains 3,360 diamonds, 600 sapphires, 300 emeralds, and 1.5 kilograms of solid, 24-karat gold, according to WBC president Mauricio Sulaiman.

The estimated value of the belt is more than a million dollars. Fight Hub TV caught up with Sulaiman and he talked about why they created such an expensive belt for this fight.

Conor McGregor’s son is just about three months old, but you know the old adage: it’s best to start them early. So Mac got some new threads for his son and it is beyond adorable.

My mini-me! Conor McGregor gets his son suited up before Floyd Mayweather mega-fight https://t.co/tDQVG0LTel pic.twitter.com/CIc7Z1IjWv

Let’s hope Mac doesn’t use that foul language at home too much or Baby Mac will get a lot of detentions once he begins school.

Floyd Mayweather Sr. is apparently still all salty about his confrontations with McGregor during the press conference tour. He still thinks he can whoop on McGregor, which makes him a grade-A trash talker or utterly delusional — you make the call. Speaking to SportsDirect for the UG, Mayweather Sr. reiterated that Conor can also come get some from him after his son is done with him.

“I can hold mine, verbally, and physically. I already told him, if you want me to whoop your ass first, I’ll do it, and then I’ll let my son take care of it. Or you can do it opposite — you can do it with him first, and then me. Any way you want to do it. It don’t make no difference how we whoop you. If you fight me tonight, you’re going to get whooped. If you fight my son, you’re going to get whooped. It’s a done deal either way you go.”

Floyd Mayweather Will Place a Huge Bet on Himself

Even the most casual of boxing and sports fans know that Mayweather is undefeated — and he loves himself some big, big wagers. Big bets on MayMac are pouring in, and Mayweather said this fight will be no different for him. He’s going to bet large on himself and he told USA Today he’ll provide the evidence.

Vegas Insider RJ Bell then tweeted this out:

NO RULES AGAINST THIS!
Trusted Vegas Source:
Mayweather seriously considering betting $5 MILLION on himself to beat McGregor.

Assuming Floyd makes $300 million for this fight, wagering $5 million on himself is the equivalent of the average Joe buying five bucks in lottery tickets. That just made me sad. Moving on…

“One hundred percent, it will not go the distance,” Mayweather said at this week’s final press conference.

But as McGregor repeatedly pointed out during the press conference tour, Floyd hasn’t had a knockout win since 2011. Floyd also offered some weird reasoning as to why he will win by knockout.

“I’m doing this for myself and my family, but I want to give everyone a great show,” he said. “Everyone deserves a good show. The Pacquiao fight wasn’t exciting enough. That was on Pacquiao, but I have to give the fans a great show this time.”

In other words, Mayweather just hasn’t felt like knocking anybody out in the last six years. Got it.

MMA fighter and professional loud mouth Chael Sonnen spoke with Fight Hub TV about his predictions for the MayMac fight. “The American Gangster” agrees with Floyd that Conor will be easy work.

Sonnen also talked about the possibility of a fix.

“You have to understand, they’re in the filthiest, dirtiest sport in the history of the world. The government has to regulate it, government doesn’t regulate sport, only in communist countries are governments involved in sport, well in this one, they have to regulate fighting because it’s so corrupt and dirty. So, could the fix be in? Sure, I’ll play along on a conspiracy, but in a fair contest, this is over and it’s over fast.”

This Is Our Concern, Dude

The Association of Ringside Physicians is worried, you guys. They are left wondering how this fight was even sanctioned, and in that, we learn there are some really naive people in the world. Pro Tip: if an event will make a lot of people a lot of money, you can count on it being sanctioned by a state commission. But apparently, they are fearful that someone could get severely hurt.

Larry Lovelace is the president of that association, and he spoke with the New York Times about their concerns.

“We were very surprised this bout was even sanctioned and was going to be permitted to carry on. The thing I really fear, truly fear, is that somebody’s going to get really hurt in this upcoming fight.”

In reading the article they were mostly concerned about McGregor, who will be the taller, stronger, more powerful fighter on Saturday. McGregor made it through 12 rounds with former champ Paulie Malignaggi and came out virtually unscathed, although both were wearing head gear.

Still, my concern lies more with Mayweather. He retired for a reason. And that reason is at age 40 he probably felt his skills and reflexes starting to erode. Here’s hoping both fighters put on a show for the fans and come out no worse than usual.

What Did You Call Me?

Dustin Poirier is pissed. He was set to appear on Florida’s ESPN West Palm radio station, but didn’t appreciate the way they introduced him on Twitter.

Poirier has been one of the best fighters in the UFC for a long time. That was completely disrespectful and that intern should not only have to go get coffee for the crew, next time he should also have to pay for it.

Jon Jones Did It Again, But Coach Says No Way

The sad unraveling of Jon Jones was supposed to be halted, with Jones repeatedly telling anyone who would listen that he was indeed a changed man. He was saying all the right things leading up to his most recent fight with Daniel Cormier. He looked outstanding on fight night and put Cormier away to win back his UFC light heavyweight title.

But then this week happened. Word came down that Jones failed his UFC 214 drug test and popped hot for steroids. Cue the “tainted supplements” defense? You betcha. Here is Jones’ manager Malki Kawa on the fiasco.

“I can almost bet my life on it that this is another tainted supplement. The problem that we’re having with that is that he passes all of the random tests, but then the one test that we know about, the one that we for sure know about, is the one that we fail? So, something here is not sitting right. I’m assuming it’s the supplements we took. We just obviously got to get to work on it, see what was taken that month, that three-week period, that week of the fight, and figure it out from there.”

I suppose Kawa’s explanation has some merit considering all the circumstances, and Jones better hope the retests concur. Otherwise, Jones is done with MMA for at least two years stateside, if not longer. I’ll certainly withhold judgment until all the information is available, but how many times has the tainted supplements defense worked? One out of every 20?

It’s hard to disagree with that comparison if the result remains the same after an investigation and retesting.