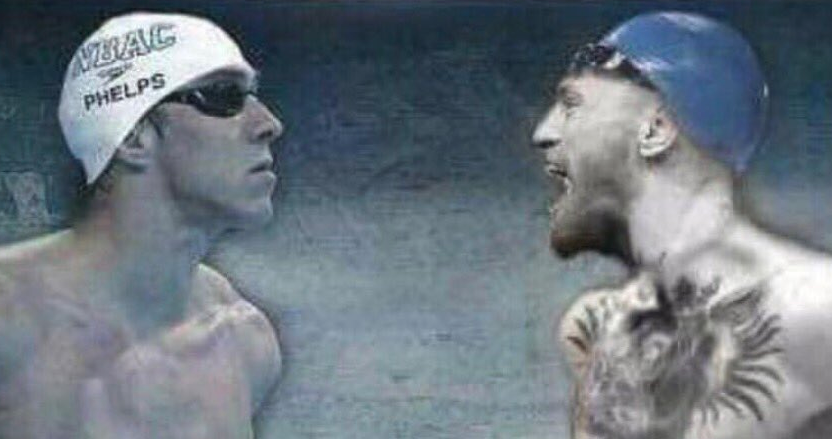 The first oddity of the Mayweather vs. McGregor fight came during the referee’s instructions. The ref locked in on Conor and seemed to be giving him some stern warnings. A secret microphone picked up what was really said in the ring. (Some NSFW language.)

Everybody wants in on the Conor McGregor madness, even Olympic legend Michael Phelps.

All of this talk… Should we race as well?? @TheNotoriousMMA pic.twitter.com/l3JoMgb1qT

I don’t care if they ever race, but at least one press conference would be money.

Mayweather and McGregor Got Paid

The purses for the big MayMac bout were revealed by the Nevada State Athletic Commission, with Floyd Mayweather earning $100,000,000 for his win and Conor McGregor taking home $30,000,000.

The UG estimates that those numbers will likely triple when the PPV money gets added in. So Floyd will make about $300 million and Conor about $100 million. And that’s why you are seeing a lot more call-outs from boxers and UFC fighters, all looking to get in on the money.

Speaking of fighters wanting to get paid in full, Nate Diaz will demand a payment of $20 to $30 million to face Conor McGregor for the third time, according to his coach Richard Perez.

“UFC’s making a whole lot of money, a whole lot of money, and they’re pocketing it. They’re giving more to McGregor, so it’s not fair because it takes two in that ring to draw a crowd — I mean, a good two fighters. It’s just like Mayweather when he fought Berto. It was not even sold out at all. It was embarrassing. It’s because that guy couldn’t draw a crowd. See, that’s what I’m saying, it’s the fighters that draw the crowd, and Nathan and McGregor, third one would be outstanding. Everyone knows that. So he needs to get paid at least $30 million easy.”

Good luck with that. While it would be fantastic to see Diaz vs. McGregor fight for a third time, especially at 155 lbs., that’s just stupid, stupid money for a UFC fight. Even if that fight did over a million pay-per-view buys, I don’t see how the UFC could/would pay that type of money.

Former Mayweather opponent Andre Berto told TMZ he’d like to come to the UFC to be the first person to ever win a boxing world championship and a UFC title.

This is much more intriguing to me than another MMA fighter against a boxer in boxing. Berto’s sister is currently a professional MMA fighter and his brother had a long MMA career. Was Berto just talking for the camera there or would he really want to give it a go in the UFC?

It remains to be seen whether Rousey will ever compete in the UFC again. Browne is just 2-6 in his last eight UFC fights and he’s currently riding a four-fight losing streak. Perhaps Ronda will just take her talents to the WWE…

Paul Levesque, better known as Triple H, was on ESPN and talked about the possibility of Ronda Rousey coming to work in the WWE.

“First of all, she’s got to stop throwing me around the ring, I didn’t like that very much. She’s definitely interested and we’re having conversations. I’ll say it right here on ESPN: If she wants the opportunity, I’d be willing to give it to her.” (h/t: Low Kick)

Rousey’s friend and former UFC fighter Shayna Baszler is currently competing in the Mae Young Classic, which can be seen on the WWE Network.

Don’t Bring a Gun to an MMA Fight

Some moron decided to rob an MMA gym in Los Angeles and the outcome wasn’t pretty — for the gunman. If one were to consider a robbery and hoped to make a decent score, I’m not sure where an MMA gym would appear on the list, but I doubt it would crack the top 1000. Obviously, this kid wasn’t too bright. He walked in with a gun and walked out all bloody and into police custody.

Derrick Lewis, aka “The Black Beast,” is one of the top heavyweights in the UFC. He’s also number one in our hearts after he jumped into service after Hurricane Harvey struck. Lewis was transporting people in his big truck — including a man who really wanted to take his Confederate flag with him.

“I picked up one guy and his family, his wife – he just kept apologizing to me, because all he really had was his clothes, and he wanted to take his Confederate flag. He wanted to take that with him, and he just apologized and said, ‘Man, I’ll sit in the back of your truck, man. I don’t want to have my flag inside of your truck like this.’ I said, ‘Man, I’m not worried about that.’ He’s saying, ‘You never know if you ever need someone, so…’ –- I already knew where he was going with it. I just said, ‘Don’t even worry about it. It’s OK. I don’t care about that.’ His wife kept hitting him and saying, ‘You should have just left it.’”

Looks like we know who the real People’s Champ is. “The Black Beast,” or as this gentleman in the video refers to him, “Derrick F’in Lewis.”