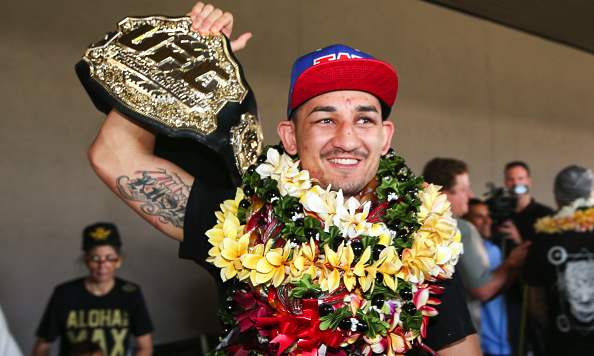 This week: Mighty Mouse is mighty pissed at Dana White and the UFC, UFC Hall of Famers battle it out on Twitter, “The Voice” leaves AXS Fights, Sakuraba gets the Hall call and more!

Max Holloway did what he said he would do at UFC 212. He went down to the king’s (Jose Aldo) village, beat him up, and took his crown. It was an amazing performance, especially when you consider the longevity of Aldo’s reign in the featherweight division.

The new champ was warmly received by his fellow Hawaiians upon returning home with the belt.

After years of playing the good soldier, UFC flyweight champion Demetrious “Mighty Mouse” Johnson let loose and emptied his quiver on Dana White and the UFC in a message posted to Discord. It’s actually more of a diatribe than a message, and it’s thorough and well-reasoned.

It’s too long to post in its entirety, but you can check out the full text here. But DJ summarizes his points in a TL/DR fashion at the end of his statement, and here are those remarks.

DJ reveals the very ugly side of the fight game, and it’s beyond confusing as to why the UFC would treat one of their best fighters like he didn’t matter.

Let’s get to some better news. Two of the most-feared power-punchers will do battle this Saturday night at Derrick “The Black Beast” Lewis fights Mark “The Super Samoan” Hunt. I would be surprised if this fight goes more than three minutes.

Hunt came to the UFC in 2010 and Saturday’s bout marks his 15th for the UFC. Only two of those fights have gone to a decision. The rest have ended with Hunt or his opponent on their backs. In fact, if you take away the two of the fights that were ruled no contest — one against Brock Lesnar and the other Antonio Silva, Hunt has not been in a fight that went the distance since 2011.

Like Hunt, Lewis has a spectacular finishing rate, with 16 of his 18 wins coming by way of knockout. He’s also riding a six-fight win streak. While it’s always fun to watch two behemoths throw hands inside the cage, this is an important fight in the heavyweight division, specifically for Lewis, who has his eyes on an eventual title shot. Lewis is currently ranked sixth in the division, but fighters one through five are a world apart from the ten other ranked fighters. A loss to Hunt would be a disheartening setback, and it’s a fight he should win if he wants to be considered among the contenders at heavyweight.

You can watch Lewis vs. Hunt and the rest of UFC Fight Night on FS1 at 7 p.m. ET Saturday night.

War Machine Gets Life in Prison

At some point, you’ve likely read or heard about Jon Koppenhaver, better known as “War Machine,” and his tumultous relationship with adult film star Christy Mack, which started as something sweet and ended with Mack hospitalized after getting severely beaten by the former UFC and Bellator fighter.

HBO’s Real Sports did a piece on domestic violence in MMA and Koppenhaver and Mack’s story was one of the main focuses. The story was revived this week after Koppenhaver was sentenced to life in prison after being found guilty of 29 of 34 counts in the case, which included charges of kidnapping and sexual assault. Koppenhaver will have a chance for parole, but it won’t come for 36 years.

I don’t know if justice is the right word for what Mack gets out of this after nearly being beaten to death, but at least it’s finally over for her from a legal standpoint.

Superhero meets monster in this week’s nickname battle, as Ion “The Hulk” Cutelaba fights Henrique “Frankenstein” Da Silva. Both fighters are in dire need of a win.

Cutelaba is coming off a Fight of the Night award-winning performance against Jared Cannonier, but it was a fight he lost and he is now 1-2 in his UFC career. Da Silva started his UFC career off with a bang with two straight wins, both second-round finishes. Asked how he got his nickname, Da Silva merely replied, “Because of TV movies.” Cutelaba’s is a little more straightforward, as his physique is Hulk-like, although maybe it is also derived from TV movies.

Three straight losses are usually the death knell for UFC fighters, as many of them are cut from the promotion after the third defeat. In that context, Da Silva needs a victory more than Cutelaba, although “The Hulk” may be literally fighting for his job too.

Tito Ortiz and Chuck Liddell are both in the UFC Hall of Fame. While both fighters are retired, they did some sparring on Twitter recently. It started with some rumors of Liddell, no longer employed by the UFC, looking to fight again. He’s been seen in videos on social media training with FOX reporter Jay Glazer.

Liddell had a tasty reply:

“We took the pic as requested by the media. You knew I was going to post it, u posed for it. I heard you changed for the better but with your lack of class and character i knew it was impossible. Some encouraged me to give you a shot saying Amber changed u. Judging from your tweet you’re still the same piece of shit I’ve punked on numerous occasions. Now we know who the real trash was, you can’t blame @jennacantlose (Jenna Jameson) any more. Man up! Now let me borrow some money bitch ? where should we meet up I need it soon!”

Garbrandt vs. Dillashaw… in Tether Ball

Each season on The Ultimate Fighter, there is one episode that features “The Coaches Challenge,” where the opposing coaches battle it out to win money for themselves and their teams. This season, the winning coach received $10k and their fighters each received $1,500.

It’s probably hard to come up with ideas for these challenges after 20+ seasons of the show, but props to the producers for coming up with a dandy, as Garbrandt and Dillashaw engaged in an epic battle of tether ball.

We can only hope that their upcoming fight is as good as their tether ball competition.

Michael “The Voice” Schiavello is moving to Australia with his family, and that means he will no longer be on the call of AXS TV Fights, a gig he held down for eight years. The folks at AXS put together a highlight reel featuring some of his best calls, including “He got knocked the fire truck out!”

The calls they put on Schiavello’s highlight reel were killer and brought back some great memories from fights past, but no mention of Schiavello would be complete without his epic 2013 call of a fight that featured Danny Mainus. Schiavello’s accent made it sound as if he was saying “My anus,” and man-children like myself thought it was the greatest thing ever. Actually, I still think that.

Godspeed, Michael. I hope to hear you call fights again someday. If not, we’ll always have Mainus.

Sakuraba Gets the Hall Call

Brock Lesnar may be the best known pro wrestler to enter the world of MMA, but that’s only because Kazushi Sakuraba did battle at a time when MMA was seen only on pay-per-view. The man known as “The Gracie Hunter” got the news last week that he will be entering the UFC Hall of Fame as a member of the Pioneer Era, and old school fight fans couldn’t be happier.