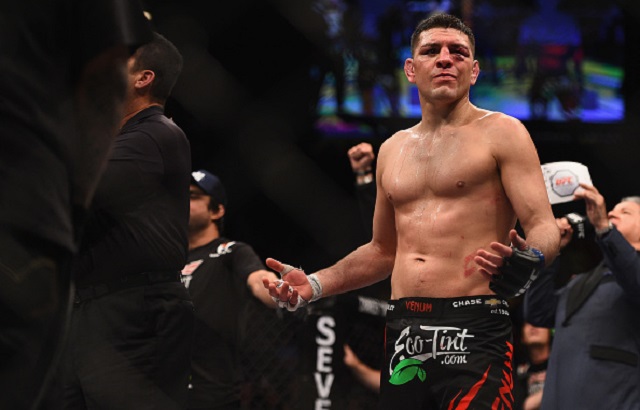 The MMA Ten keeps you updated on the latest news from the world of the UFC and beyond. This week: Insane UFC rumors, Nick Diaz: #1 Athletic Stoner, Henry Cejudo goes all Ricky Bobby and more!

Who doesn’t love Nick Diaz, and why doesn’t he have his own talk show? Diaz joined The Jasta Show and made some interesting proclamations.

“I’m the face of weed for athletes. I’m the number one athletic stoner, besides Michael Phelps.”

I’m thinking a top-10 list of athletic stoners would be a great piece. I’ll get to that next week. Diaz also said he thinks weed is a performance enhancing drug, as are vitamins. But mostly, Diaz would like to use his celebrity to combat the stigma of marijuana use.

“I’d like to start spreading some good light on this stigma that people that smoke weed are just lazy and they’re not thinkers. It’s really limiting to die without ever smoking any weed.”

Diaz also felt bad that his grandpa died without ever having tried marijuana. Listen to the interview below.

Mayweather CEO: McGregor Would Get His Ass Beat

A big stir was (unnecessarily) created when Conor McGregor got his boxing license in California. The thought behind the news is that the move brings us one step closer to a Floyd Mayweather vs. Conor McGregor boxing match. Mayweather CEO Leonard Ellerbe had this to say about the news, and what would happen if the two met in the ring.

“The [UFC] brass who recently purchased the UFC are very smart people and they would never — and put this in bold caps — let him step into a boxing ring with Floyd Mayweather because everyone knows what the outcome would be. He would get his ass beat from pillar to post. What McGregor is attempting to do is take a page out of Floyd’s book from the marketing and promotional side by using his name. The quickest way to become famous is to align yourself with another famous person, and he’s done a good job of that.”

Leonard Ellerbe is keeping it real here. This fight will never happen and if it did, McGregor would be lucky to land a few solid punches. There’s speed and defense in boxing, and then there is Floyd Mayweather’s speed and defense — two entirely different levels.

“[McGregor] has a good little hand game, a superior hand game compared to the UFC fighters he is competing with but fighting Floyd Mayweather is a whole other story. That bullshit you’re throwing over there in UFC would get you killed against Floyd.”

Jon Jones Would Get Completely Wasted Before Big Fights

Jon Jones was on The Joe Rogan Experience this week, and he dropped some pretty big news: He used to get absolutely obliterated before his fights.

“I had this crazy thing I would do where I would party one week before my fight. It was something I did throughout my whole career. It was stupid, but it was this mental crutch I had. One week before every fight, I would go and get blacked-out wasted. My logic was that if this guy were to beat me, somehow, I could look in the mirror and say that I lost because I’d gotten hammered the week before the fight. It was a safety net. The Ovince St-Preux fight was the first fight I didn’t do that and it was my worst performance.”

Jones was recently suspended for one year and before that had his title stripped. But he sounded good on the Rogan show.

Stay with it, Jon Jones. We want to see you fight again as soon as possible.

CroCop Has a New Nickname for Wanderlei Silva

Mirko Filipovic is better known as CroCop, a killer nickname that references his time as a special forces offer in Croatia. He’s also one of the biggest legends in MMA history and always been a fan favorite. But this week, CroCop was extremely angry at another legend, Wanderlei “The Axe Murderer” Silva. He took to his Facebook page to explain:

Known for his kickboxing and in particular his vicious head kicks, CroCop has one of the all-time quotes in the world of MMA. “Right leg, hospital. Left leg, cemetary.”

Your Insane UFC Rumor of the Week

News broke this week that the new UFC ownership might want to change things up with their broadcast teams. An MMA blog took this news and let their imagination run wild, and a lot of the online community bought it. The blog’s “sources” tell them that the UFC has some interesting picks to replace some of their current team:

“According to our sources, the new owners have contacted several current sports broadcasters for interviews including Stephen A. Smith and Max Kellerman. The new owners are also looking for Hollywood talent to sit at the booth and help boost ratings and give the UFC a step up in the entertainment world. Former Saved By The Bell star Mario Lopez is currently the front runner for Joe Rogan’s position, and Ryan Seacrest for backstage interviews.”

Can’t you just hear Seacrest now? The fighters are grappling on the canvas and Seacrest enters the cage. The camera pans to him: “Will Nate Diaz get the submission finish? Plus, Kelly Clarkson sings her new hit… after the break.”

Here’s what my sources are saying. They are telling me you shouldn’t believe all the garbage you read on the internet. Unless it’s here at The Comeback. We would never lie to you. And we love you.

Dallas Mavericks point guard Deron Williams has opened an MMA gym in Texas, and it’s pretty amazing. It has all the amenities, as well as a rooftop lounge with a putting green and one of those oversized chess sets. Here is the Cribs-like video:

Williams says competing in martial arts is the next step for him. His coach wants him to fight MMA in the cage.

“I don’t know about that. I will do some jiu-jitsu grappling tournaments.”

He’s also not sure if his NBA contract allows him to compete.

“I don’t think there is something specifically for MMA but there is language that could get you into trouble. You can’t ride a motorcycle. You can’t ski. If you got hurt playing football, you could definitely void your contract or face a fine.”

The way NBA players routinely sit out for rest and are often the ever-irritating “game-time decision,” maybe they should all do some MMA and BJJ training.

Henry Cejudo may have have been an Olympian and now a top contender in the UFC’s flyweight division, but he got all Ricky Bobby at the media day faceoffs for Saturday’s The Ultimate Fighter finale.

Cejudo was one of the coaches on this season’s The Ultimate Fighter. He’ll battle the always-exciting Joseph Benavidez Saturday night on FS1.

Demetrious Johnson: The Most Underappreciated Man in MMA

UFC flyweight champion Demetrious Johnson will defend his title against Tim Elliott Saturday night. Elliott won this season of The Ultimate Fighter and his prize is to receive a beating from the best fighter on the planet.

You don’t hear much about Johnson because he doesn’t talk too much, doesn’t get in trouble with the law, doesn’t do anything except win. He is the most underappreciated, underrated MMA fighter of all-time. Johnson, the true champ that he is, doesn’t care about that at all since he has his belt.

Johnson is 24-2 in his career and he’s made eight consecutive title defenses. He basically cleared out the flyweight division, so the UFC decided that they would use this season’s The Ultimate Fighter to hold a tournament with flyweight champs from different organizations, with the winner getting a shot at Johnson’s title.

Do yourself a favor and watch “Mighty Mouse” fight Saturday night for free on FS1. He is one of the world’s most exceptional athletes.

Baby, we’ve got a doozy for your MMA nickname battle of the week. Brandon “The Assassin Baby” Moreno will take on Ryan “Babyface” Benoit Saturday night to kick off the main card on FS1.

When I think of assassin babies, I usually go right to Stewie from Family Guy. But Brandon Moreno is changing that for me. He choked out Louis Smolka in his UFC debut in October, a submission win that garnered him a Performance of the Night award, as well as the cash that goes with that.

“Babyface” Benoit is 9-4 and has some of the better punching power in the flyweight division. He’s best known for beating Sergio Pettis at UFC 181 (Anthony’s little brother), and then literally kicking him in the butt after the final horn sounded. Fun fact: “The Assassin Baby” was a pinata maker before entering the UFC, and that wouldn’t have been a bad choice for a nickname.

Your MMA Highlight of the Week

Your MMA Highlight of the Week comes from Asia’s One FC and the fight between Jenny Huang and April Osenio.

Huang pulls off the rare gogoplata, a submission hold in which she holds down Osenio’s head while her shin applies immense pressure to the trachea. It’s extremely painful and that’s why Osenio tapped as quickly as she did.