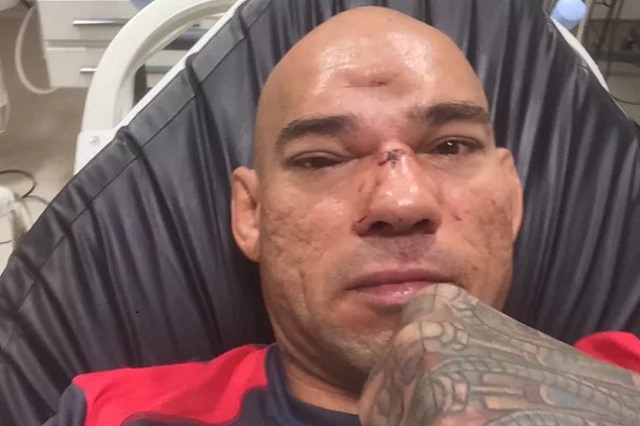 The MMA Ten keeps you updated on the latest news from the world of the UFC and beyond. This week: Cyborg’s fractured skull, Dana White stumps for Trump, and the Super Samoan is rather pissed.

The unfortunate side of the fight game reared its head last Saturday at Bellator 158. Evangelista “Cyborg” Santos suffered a fractured skull after being nailed head-on by a flying knee from Michael “Venom” Page.

Santos, the ex-husband of Invicta champion Cris “Cyborg” Justino, needed surgery, and a GoFundMe page was set up to help pay expenses while he can’t work. Bellator will cover all of his medical expenses. The juxtaposition of the pictures of Cyborg and the X-ray is nothing short of shocking.

Flying knees are perhaps the most exciting and devastating strikes in MMA. They usually end fights, but this one nearly ended a life. Thankfully, Santos had successful surgery and he was discharged from the hospital. He was told he will make a full recovery.

UFC welterweight contender Carlos “The Natural Born Killer” Condit is exciting to watch when he fights, and he’s a hoot on Snapchat. He recently made a funny when his dog tore into one of his UFC posters. 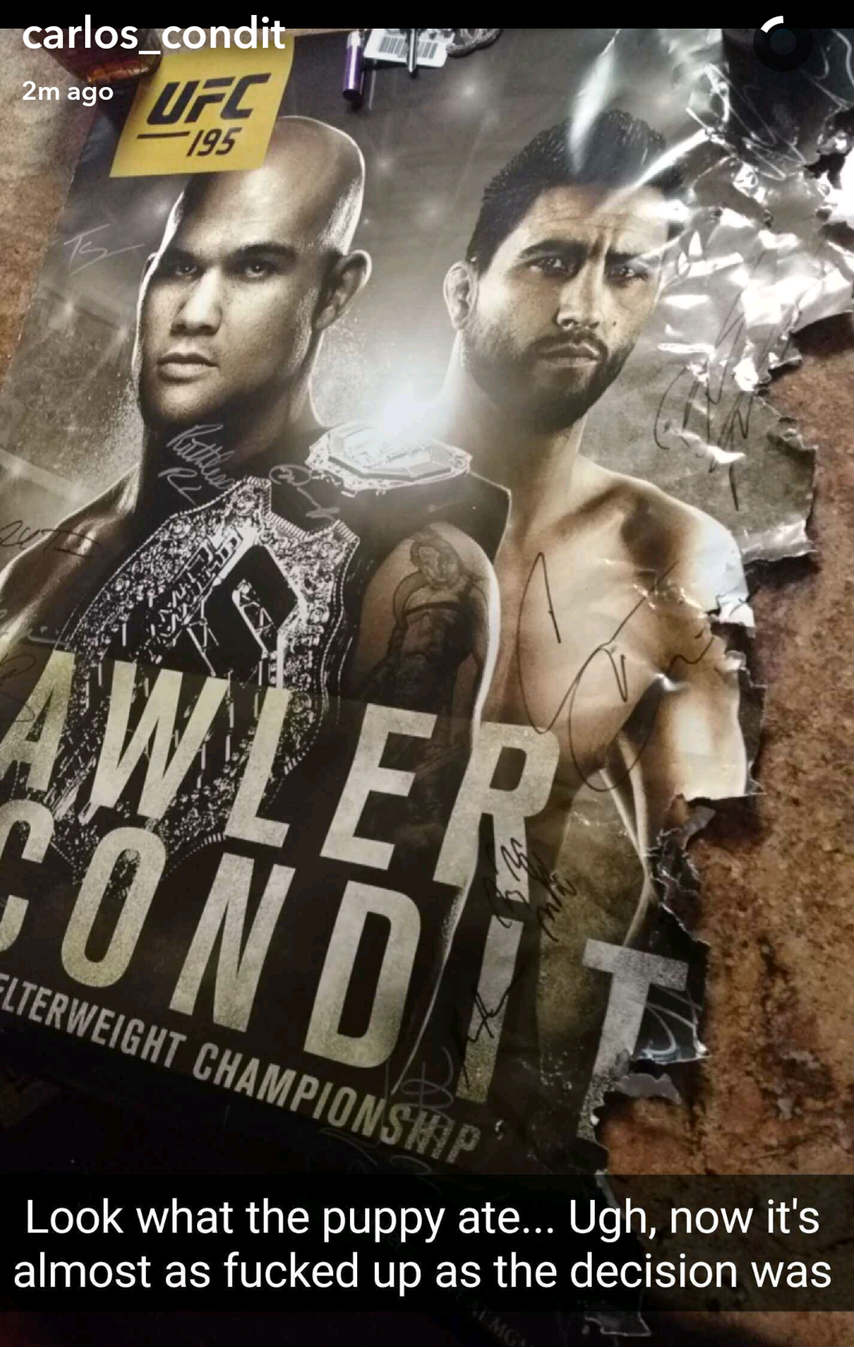 While I chuckled at the picture, I disagree with Condit about the split decision. I think Lawler won the fight. Condit needs to beat Tyron Woodley at UFC 201 to get another shot at Lawler and his belt, and you’ll want to watch that fight. Condit threw nearly 500 strikes against Lawler, and he is non-stop action in the cage. Woodley has some serious power and he’s also an outstanding wrestler. That is going to be an amazing battle.

Derrick Lewis is one of the biggest, most powerful fighters on the planet. If you watched him batter Roy Nelson at UFC 200, you were left wondering how Nelson is still alive. When the news dropped that Brock Lesnar failed a pre-fight drug screen, Lewis had some opinions on the excellent MMA Hour.

“When I was fighting in the lower league, I was fighting a lot of guys that was on juice. It doesn’t matter. That don’t help you fight any better, to me. I’ll still be eating fried chicken and McDonalds before my fight, and I feel fine.”

That’s funny because I also eat fried chicken and McDonalds before I write these columns. I would love to go out to eat with Lewis. Maybe that could be a new feature here at The Comeback. I go out to eat with hulking heavyweight MMA fighters and we chat. But I digress. Lewis continued:

“It literally don’t affect me. I don’t care. The sport itself is dangerous. Anything can happen. So if you want to juice, go ahead and juice up. It’s just going to make you more depressed afterwards.”

Fight fans should cherish Lewis. He’s all natural and one of the most exciting fighters to watch in the game. Here’s hoping he has a long, successful career. And Derrick — let’s do dinner. You can treat!

I’ve long been a fan of Jose Aldo. Now, not so much. Why? Aldo says he employed spies in Frankie Edgar’s camp leading up to their UFC 200 fight, and I find that to be absolutely despicable. Aldo is a former champion and by beating Edgar, he earned another shot at Conor McGregor and the UFC featherweight title. But martial arts are about honor and integrity, and I’d hardly consider using spies to be champion-like behavior.

“We always have a spy,” Aldo said. We send someone to be a part of that training [room] and then they give us information. We get that information and know what they are training.”

It’s one thing to watch film on your opponent and devise a game plan from that. But to have someone in your opponent’s camp revealing private information is lower than low. I’m not a big Conor McGregor fan, but I hope he smashes Aldo again when they rematch. Now someone help me down from my high horse. Onward…

UFC president Dana White spoke at the Republican National Convention in support of his friend Donald Trump. White explained that when he and the Fertittas purchased the UFC, state athletic commissions and numerous arenas around the globe rejected them. He said the only one who supported them was Donald Trump. There is some truth to that, and Trump tweeted about it back in 2014.

When nobody wanted the UFC, I opened the way by letting them fight at the Trump Taj Mahal in Atlantic City. Dana White has done a great job!

White said that America needs a fighter like Donald Trump. Here is a clip of the speech.

Melvin Guillard loves to win. And get paid. And smack booties. In that order. Guillard is looking to receive “a full paycheck” at Bellator 159 Friday night. He hasn’t received a win bonus in a while and he’s also had to forfeit part of his purse to his opponent for missing weight, an odd occurrence for a veteran who has been in the UFC and has over 50 pro fights under his belt.

Rickels is a very tough fighter, skilled on both the ground and in his stand-up game. Guillard is one of the more prolific power-punchers in the game, and he just might be smacking all those rear ends Friday night. Check it out on Spike TV.

Witness Me! (But Not Quite Yet)

Emil “Valhalla” Meek made a name for himself by defeating the villainous Rousimar Palhares (aka “Paul Harris”) at Venator FC 3. Palhares has made enemies of fighters and fans alike by holding his leg locks long after his opponents tap out. That’s not only poor sportsmanship but also very dangerous. It’s also why Palhares is no longer in the UFC.

Meek was signed to the UFC after his big win and was scheduled to fight in Hamburg on Sept. 3. That is no longer the plan, something Meek explained in a Facebook post this week.

Meek walks out to the cage with an enormous ax and his Viking look. That part is fun. But when he gets in the cage, he’s all business, usually finishing his opponents in short order. We’ll have to wait to witness Valhalla, but it will be worth it.

Mark Hunt is pissed. He lost his last fight to Brock Lesnar, a fighter who failed a pre-fight drug test. But that’s not all he’s hot about. He says the UFC has too much power, and they don’t care enough about the fighters. He wants a fighters association post-haste, and he took to his website to explain all his frustrations.

“These guys have lined there (sic) pockets with our blood if you ask me. I mean they deserve to get paid no doubt, they took the UFC from nothing into what it is today, but come on, most of the guys fighting, get paid nothing and have no benefits.

“If you ask me there needs to be a system where they at least run things past the fighters before making these decisions and the fighters can look out for each other. We need an association where we can have our voices heard. We are massive reason why fans watch the sport and we risk our health to do it.”

“The way I see it, the Brock Lesnar doping thing is just another reason why we need a fighter’s association. These guys are just making up the rules as they go.”

We have a killer nickname battle this week. Kamaru “Nigerian Nightmare” Usman vs. Alexander “Thunder of the North” Yakovlev.

Usman is a heavy-hitter, and you might remember him from The Ultimate Fighter. Yakovlev has won his last two fights and also owns a win over the always-exciting Paul Daley. You can see these two go to war on the UFC on Fox prelims.