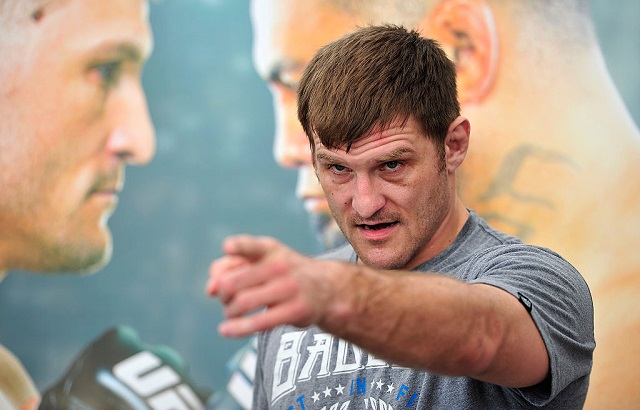 The MMA Ten keeps you updated on the latest news from the world of the UFC and beyond. This week: Stipe’s scintillating commercial, Chael Sonnen speaks, Bisping’s on fire again and more! Let’s start with an Emmy-worthy performance from the heavyweight champ.

Can’t wait to complete my new man cave with @naturestonefloors !

Belt, schmelt. The real sign you’ve hit the big time is when you do a cheesy commercial for a hometown business. UFC heavyweight champion Stipe Miocic tests out his thespian skills in this new spot for a local Cleveland flooring business. I believe we can file this commercial in the “It’s so bad it’s good” category. As good as Stipe’s commercial is, it doesn’t hold a candle to this one from my beloved Chicago back during the Bulls’ title run. Here’s Scottie Pippen asking ladies to party in front of an enormous, phallic-like sub sandwich:

Pip is the undisputed champ of cheesy local commercials. What else ya got, Stipe?

You get a little silly when you put your opponent to sleep in less time than it takes to watch a Stipe Miocic commercial. Chas Skelly is super-hyped in this interview after putting Maximo Blanco to sleep in just :19. Here’s the interview and the fight finish:

Skelly was awarded a Performance of the Night bonus for his work, and he has won five of his last six fights. He should be ranked in the top-15, but he isn’t just yet. Keep watching Skelly because he’s always doing something exciting.

Your MMA Quote of the Week

Your MMA quote of the week comes from the king of quotes, the one and only Chael P. Sonnen, who recently signed with Bellator MMA. Sonnen pokes a little fun at his past and proclivity to take PEDs with an all-timer during his interview with Sherdog Radio: “I’ve got a higher juice rate than Tropicana.”

Sonnen was hardly the fighter he once was near the end of his UFC career, so why come back now? “This is the only game that I know how to do. It’s a large part of who I am and it’s a large part of my social life, too. I don’t have a lot of friends and I don’t do a lot of things socially. I had a lot of free time and I hate free time. I need something to do.” That statement is why you see more MMA athletes retire and un-retire over and over. Fighters fight. That’s what they do and it’s hard to give up.

Chael Sonnen, Rory MacDonald, Benson Henderson and Josh Thomson are some of the big-name defectors that have left the UFC for Bellator. The conventional wisdom is that Bellator offers better guaranteed money and the ability to command whatever you can in terms of sponsorship dollars. But Thomson recently revealed another Bellator perk that led him to make the move: more fights but less rounds.

“I left (UFC) because they made all main event fights five rounds,” Thomson said. “If I’m fighting in title fights or main events, those two extra rounds whether it’s in the UFC or Bellator are knocking years off of my life just to fight. It’s time for me to make money.

Unlike Benson Henderson, Thomson has enjoyed his Bellator tenure so far with two wins, both finishes. More and more fighters will choose Bellator over the UFC because money talks. The professional MMA fighter on average has a handful of years to compete and make money.

Dan Henderson knows there is only one way to shut Michael Bisping up: knock him unconscious. But thankfully that’s just a temporary fix because Bisping is one of the best things going today in MMA. In his recent piece for Champions.co, Bisping takes aim at former UFC middleweight champs Chris Weidman and Luke Rockhold.

He beings with an evisceration of Weidman. “Why should he be embarrassed that I’m the champ? I mean, really, it’s about time that Chris Weidman just shuts the f**k up. He’s acting like a little bitch, and we all know it. Everybody is sick of him and all that whining. He’s always feeling sorry for himself and making excuses. Quit being a little bitch, Chris. Get back in the cage, win a fight and then maybe we can talk.”

Next up was Rockhold. “I thought Rockhold was going the Derek Zoolander route, but I guess that might not be working out for him as well as he thought it would. Maybe the winner can get a school for people who can’t read good and who want to learn to do other stuff good, too. “Seriously, though, I think Jacare beats him. I don’t think Rockhold will ever be the same again. I think I exposed him, to be honest. I think I exposed his chin, for sure. If Jacare stands in the pocket with him, he can definitely catch him. Vitor did it, I did it and Jacare can do it, too.” No one is enjoying their title reign more than Michael Bisping.

Dan Henderson will rematch Michael Bisping at UFC 204 on Oct. 8. This time, the middleweight title is on the line, and Bisping is clearly dying to avenge his infamous UFC 100 knockout loss to Hendo. We were told this would be it for Hendo, regardless of whether he wins or loses. But it seems that Hendo may be having a change of heart.

I’m sure with a few extra zeros back there I would consider coming back. But, at the same time, I was ready to be done my last fight. With the opportunity to finish with a belt and be the world champ at the end of my career, I couldn’t say no to that. When they offered me that, I told them that this will be my last one for sure, win or lose.”

If their main event title match does a ton of PPV buys, the money will be there for a rematch, although Bisping will only want one if he loses. You might think that at 46 years old Henderson should just call it a career. But when you can make about a million dollars for punching someone you don’t like, it’s a bit hard to turn that down. Hendo made $800k at UFC 199 for knocking out Hector Lombard, plus his Reebok sponsorship money, plus $50k for a Performance of the Night bonus. He’ll make more at UFC 204.

Your MMA Picture of the Week

Your MMA picture of the week comes from the Instagram account of UFC bantamweight champion Dominick Cruz. The UFC is on Brazil for the event on Saturday, and Cruz will be handling commentator duties on the FS1 pre- and post-shows. Cruz fights at 135, the weight that everyone wants Cris Cyborg at so she can fight Ronda, Miesha, Holly and the rest of the UFC women bantamweights. But this picture of Cyborg and Cruz signifies how difficult it is for her to make that weight, and she’s even had difficult cuts to get to 140. Just look at the size difference.

Zingano took to Instagram to talk about the joy that is cutting weight, calling it the ‘invisible injury’ that no one sees.

I’ve cut 35 lbs in 5 weeks. The majority of it being in the last two days before weighins. Yeah we make weight, but it f***s our metabolism and hormones a little more each time we do it, making our weight go up even further between fights. It’s an invisible injury, especially once you get hit in the head and knock that pituitary gland around while being dehydrated. If you look at all the female fighters that get “fat” between fights, know there’s a lot more going on there than being a food ninja.

The MMA nickname battle of the week comes in the main event of UFC Fight Night on Saturday with Cris “Cyborg” Justino taking on UFC newb Lina “The Elbow Queen” Lansberg. It’s also the must-see fight of the weekend. Cyborg imposes her will on her opponents like no one in the history of the sport. She simply dominates her opponents and often it is in brutal fashion.

Lansberg is 6-1, winning six straight after dropping her pro debut. She has four knockout wins to her credit, but she has never fought in the UFC and certainly has never been matched up against a fighter of Cyborg’s caliber. Can someone actually slug it out with Cyborg and win? It’s doubtful, but Lansberg will go for it Saturday.

Then on Saturday, UFC Fight Night: Cyborg vs. Lansberg gets going with two prelim fights on UFC Fight Pass beginning at 6:30 p.m. ET. The prelims and the main card then move to FS1 at 8 p.m. ET. The main event is must-see, as is the Roy Nelson vs. Antonio “Big Foot” Silva brawl. Someone is getting knocked out in that one. Former bantamweight champ Renan Barao returns, and “The Irish Dragon” Paul Felder will go against the always-tough Francisco Trinaldo.