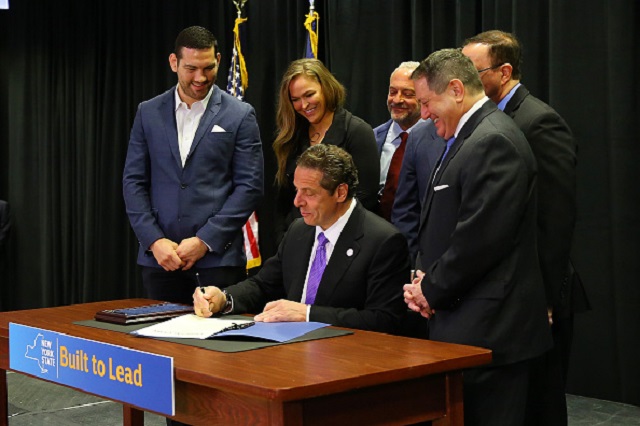 Mixed martial arts was legalized in New York Thursday morning, and the UFC is wasting no time in setting up its first event in the state since 1995.

New York was famously the sport’s last holdout in the United States. The state banned MMA in 1997, despite its connection to the sport from its earliest days. Madison Square Garden was the host site for UFC 1, but New York has not hosted a UFC event since UFC 7 in Buffalo on Sept. 8, 1995. As Gov. Andrew Cuomo signed legislation lifting the ban on MMA — in Madison Square Garden, no less — the sport officially became legalized everywhere on the continent.

Following the signing, UFC CEO Lorenzo Fertitta said the promotion would hold its first event in New York on Nov. 12 later this year at Madison Square Garden. This date happens to coincide with the 23rd anniversary of UFC 1, which was held in the same arena. Fertitta also said the UFC plans to host a second event in New York before the end of the year, but offered no further details.

The UFC had many representatives on hand to witness the signing, including former champions Ronda Rousey and Chris Weidman. Rousey introduced Cuomo to the crowd, and the governor exuded a very optimistic outlook about what the sport could mean to the state.

Cuomo: If @RondaRousey fought here in November, that would be a hell of an event. I would buy my tickets now

“Speaking as a prideful New Yorker and with a tad of New York arrogance, I think this completes the journey for MMA,” Cuomo told reporters, via Yahoo Sports’ Kevin Iole. “Coming to New York means you’re coming to the place. Madison Square Garden is the international icon for great sports events. MMA is going to be in this Garden, in this beautiful, redone Garden, that [owner] Mr. [James] Dolan himself has really made a spectacular forum. That is really the culmination for MMA.”

Thursday’s signing was a the conclusion to a long journey to get the sport legalized in New York. State Senate legislators voted in favor of legalization, 113-25, back on March 22 and Cuomo’s signature marked the end of one of the silliest ordeals in political sports history.