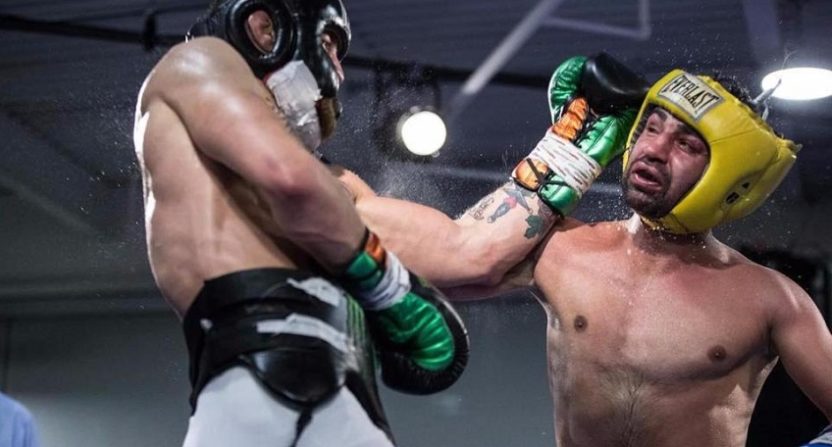 The MMA Ten keeps you updated on the latest news from the world of the UFC and beyond! This week: Paulie Malignaggi still ripping Conor McGregor, Thug Rose bares all for Women’s Health Mag, the catchy, viral Conor McGregor Song, a look at the MMA calendar and more!

GSP vs. Bisping Is Official

Finally signing my UFC 217 Bout Agreement vs. Michael Bisping for Nov. 4th at MSG – Get ready for a big night in NYC!!! pic.twitter.com/VgqIVnsLwv

It’s finally official. Georges St-Pierre will fight Michael Bisping on Nov. 4 at UFC 217 at MSG in New York. It will be his first fight in almost four years, when GSP won a split decision over Johny Hendricks at UFC 167. The fight will be for Bisping’s UFC middleweight title.

Another title fight has been added, but not yet confirmed by the UFC. Still, we’ll take bantamweight champion Cody Garbrandt’s word for it:

Thank you @donatella_versace for this amazing gift this morning ?

We know that McGregor was incredibly proud of his Gucci mink, but now he has this sweet custom robe from fashion icon Donatella Versace. Do non-millionaire men wear robes? Did they go the way of the morning newspaper? Maybe something like this will be the holiday present from the brass for all The Comeback writers. Just putting it out there.

Mayweather vs. McGregor Undercard Is Lit

The MayMac pay-per-view undercard is complete, and it’s outstanding. The PPV will be costly, but this fantastic undercard should soothe some of the anger.

Davis is just 18 and has recently handed two fighters the first losses of their careers. “Tank” has been to a decision just once in his 18 fights. Davis vs. Fonseca is the perfect fight to get fans going crazy before the main event of Mayweather vs. McGregor.

“This guy is one of the biggest dirtbags I’ve ever met in my life — bar none. I was amazed at what a dirtbag this person is. I don’t care if we never speak again. My life is fine if I never see Conor McGregor again.”

I’m not sure what Malignaggi has to gain from these continued rants. Is he trying to set up a fight with McGregor after Mayweather? The payday wouldn’t be anything like the one McGregor is getting from fighting Mayweather, but it would definitely be worth it for Paulie, especially if he truly wants a shot at McGregor in a real fight. It seems he already knows how that fight would go.

“He wants to be the guy who always has the advantage because when he has an advantage he’s a big man. When he gets tired, he wants out of a fight.”

An Irish musician named Mick Konstantin has penned “There’s Only One Conor McGregor,” and it’s a catchy song that is going viral. It’s already been seen and heard over 2.5 million times on Facebook and now it’s starting to spin the counter on YouTube.

The lyrics are certainly Conor-Esque:

“Mayweather, you’re old and your small
And the truth is that you’ll do feck all
Cos’ precision beats power and timing beats speed
Why have you got a school bag Floyd you can’t even read”

Top contender “Thug” Rose Namajunas will challenge Joanna Jedrzejczyk for the UFC women’s strawweight title this year, rumored to go down on the big UFC 217 card. She also became the latest in a long line of UFC fighters and athletes to get naked for a magazine shoot. Namajunas bared all for Women’s Health Magazine and their first-ever “Naked Issue.”

#nakedin3words for @womenshealthmag: Cut,The,Shit. Be yourself, work hard, love your body and put your best self forward. What are your 3 words?

Paige VanZant is reportedly taking her talents to the newly-formed UFC women’s flyweight division, but she’s going to need some stitches first. VanZant recently shared a rather grotesque photo of her new coin purse.

VanZant is reportedly fighting Jessica Eye at UFC 216 on Oct. 7, so that’s plenty of time to heal up that foot.

Jon Jones called out Brock Lesnar after his impressive win over Daniel Cormier at UFC 214. He’s apparently keeping that option open and fueling the rumors on social media. He posted this fan-made fight poster on his Instagram.

Jones would easily wreck Lesnar and make a lot of money in the process. Will it happen? Right now I doubt it, but if they announced a date for it tomorrow that wouldn’t be a surprise either.

Mark Hunt appeared on former UFC fighter Mike Swick’s podcast and let loose on his two least-favorite people: Jon Jones and Brock Lesnar. He’s not at all a fan of the rumored superfight between the two.

“Look at these f***ers. You’ve got Jon Jones, for instance. That guy is the best, one of the best fighters in the world but he’s a cheater. Just like Brock Lesnar, you’re all a pack of frickin’ dog cheats, that’s all you are. Nothing else. So now the two f***ing biggest cheaters in the world are going to fight! Oh f***, I’m not gonna waste my money watching two cheaters fight. Why would I? They’re cheaters, in the end. That’s basically all they are. They should get nothing. I used to respect Jon Jones before this but I don’t respect him after this. When you get caught for doping, and he got caught for the same dope that Lesnar did, you shouldn’t – he’s not a martial artist, none of them are. They get no respect from me. None.”

I get that Hunt is still salty from his loss to Lesnar at UFC 200, especially since Lesnar failed his drug test leading up to the fight. The good news is Hunt is coming off a fantastic win over Derrick “The Black Beast” Lewis, halting the heavyweight’s winning streak at six.

It’s a bit quiet in the near future for MMA, but here’s a look at what’s coming up: