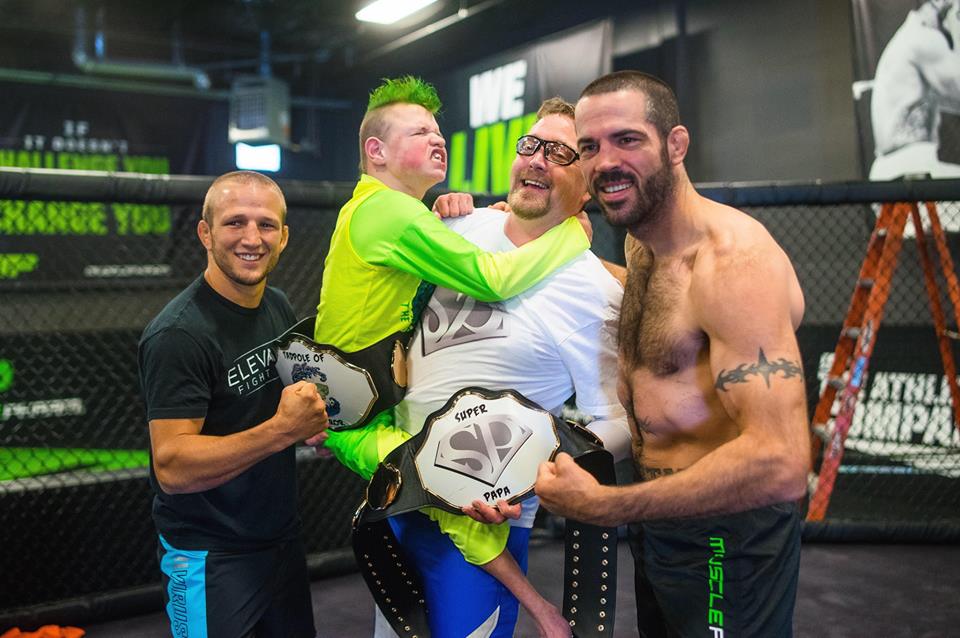 The MMA Ten keeps you updated on the latest news from the world of the UFC and beyond. Read it and you’ll feel like Bruce when he finds out Peter Griffin has a mustache.

The media tendency is to shine a light on all the scandalous scoundrels in the world of sports, but there is good news out there.

Check out UFC fighters Matt Brown and T.J. Dillashaw from Elevation Fight Team take on the “Tadpole of Terror,” a matchup made possible by Make-a-Wish Colorado. This will hit you right in the feels… all the feels.

Hollywood has slowly but surely come to realize that MMA is an amazing sport. The latest actor to sing its praises is the man who loves to make sports movies, Kevin Costner. While doing a press junket for his new film Criminal, Costner said he has been watching MMA for about 15 years, and he thinks the sport should be in the Olympics.

“I think it’s one of the greatest sports out there – the drama that exists and the way they’ve controlled their sport,” Costner said. This is all great, so long as Costner doesn’t make a dramatic MMA film with a running time of 193 minutes. If he goes the Tin Cup or Bull Durham route, I’m in.

Apparently he couldn’t cut it as a professional Quidditch player. Actor Josh Herdman, better known as Gregory Goyle from the Harry Potter film franchise, made a successful foray into MMA, beating Polish fighter Janusz Walachowski via unanimous decision at Ring of Champions in London. Herdman told Addicted MMA he wanted to fight MMA because he loves the sport.

“It’s raw, exciting and unpredictable. I find it more interesting than boxing although I appreciate the beauty and art in boxing. It also made sense to move onto MMA because of my jujitsu training.” Herdman said he will fight a few more times as an amateur, and if it goes well he will turn pro. So if CM Punk doesn’t get annihilated in his UFC debut, perhaps Mr. Herdman can be his second opponent.

Cain Velasquez wants to kill Vince Vaughn in the new film Term Life. Vaughn is wanted dead by the mob and former UFC heavyweight champ Velasquez is one of the henchmen. The movie also stars Hailee Steinfeld, Terence Howard, Taraji P. Henson, and Better Call Saul actor Jonathan Banks. Cain looks like he could have fit right in with the cousins from Breaking Bad, Lionel and Marco Salamanca. They all have that disturbingly stoic look, which I also just decided will be the name of my new album.

Here’s the trailer — dig that mop on Vaughn’s head:

Velasquez is scheduled to fight Travis Browne at the epic UFC 200 on July 9.

UFC bantamweight contender and former “The Ultimate Fighter” season 14 winner John Dodson is coming off a vicious first-round knockout of Manny Gaburyan at UFC on FOX 19. Now 18-7 as a pro, Dodson is 0-1 on the Twitter humor scoreboard. To wit:

Dodson deleted the tweet, then posted another tweet with an apology. “My apologies my last tweet was a honest mistake #typo #nodisrespect.” I believe him. About as much as I believe athletes who have “no idea” how they tested positive for PEDs.

Good Morning America hosted a UFC takeover Wednesday morning. UFC president Dana White announced on the show that Jon Jones will face Daniel Cormier at UFC 200. That’s all good, but I was expecting all the UFC stars to go on GMA and start throttling everyone on the set. Now that would have been some awesome morning television.

Meanwhile, Conor McGregor says he is back on the card but Dana White says he isn’t. Nate Diaz, initially scheduled to rematch McGregor at UFC 200, says he is going on vacation and says the only fight he’ll take at UFC 200 is one with McGregor. With or without McGregor vs. Diaz II, UFC 200 features an amazing card:

Anyone up for the return of Georges St. Pierre against UFC welterweight champion Robbie Lawler? Check out some of the face-offs/staredowns from the UFC 200 presser: 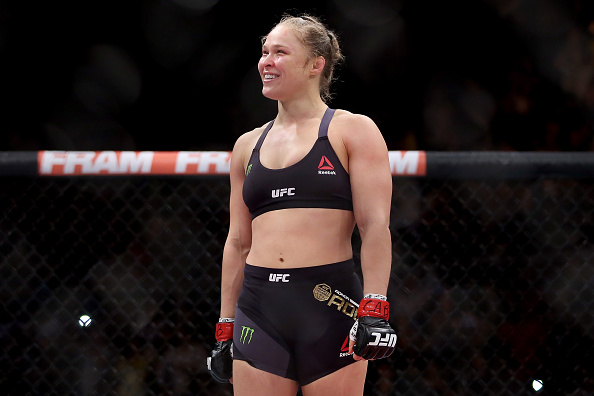 Ronda Rousey continues to expand her movie career, now getting involved on the production side. But those upcoming films will be on the small screen. According to Deadline.com, Rousey signed a three-film deal with Lifetime Network to “bring stories that reflect her passions about empowerment to the screen.”

Rousey was also recently named one of TIME Magazine’s 100 Most Influential People, and she sat down to talk about the sting of losing the title, and what motivates her these days. While she doesn’t have a fight scheduled just yet, Dana White has said Rousey will fight sometime in 2016. She still sounds somewhat wounded, although she vows to win her belt back.

“I’m coming back to win this title for the people that believed in me,” Rousey told TIME. Check out the video:

Your MMA Meme of the Week

Rashad Evans is the former UFC light heavyweight champion, but he ran into the buzzsaw that is Glover Teixeira at UFC on FOX 19. He got knocked out in the first round, and the interwebs went to work on creating some fantastic memes. This one is my favorite. 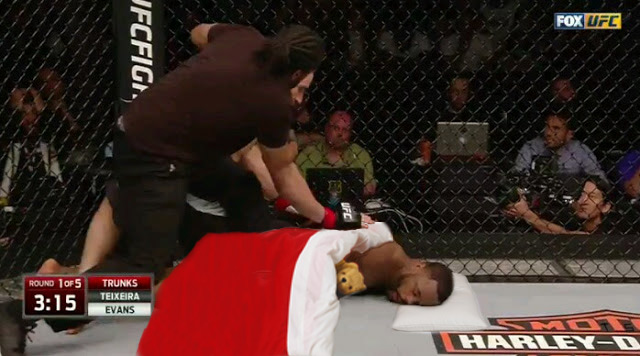 Aljamain “Funkmaster” Sterling will take on Bryan Caraway at UFC Fight Night 88 on May 29. Caraway is the boyfriend of UFC women’s bantamweight champion Miesha Tate, and he catches a lot of flak because Tate is more successful than he is in MMA. It’s basically nonsense, but for some reason people keep going back to it. Sterling, who remains undefeated at 12-0, showed off his Photoshop skills with the fight poster to make fun of Caraway.

Damn, shawty looking good in the pink and blu…wait, oHhhH HELL NOOO! Caraway is back at it again with Tates Cupcake 😂 #damndaniel #BackAtItAgain #UFCVegas #respeck #ProtectYaNeck #BryanThoughtIWasDone #GotEmmm! Edit: @kentdavies1 A photo posted by Aljamain Sterling (@funkmaster_ufc) on Apr 27, 2016 at 7:36am PDT

For Sterling’s sake, I hope he hits harder in the cage than he does on social media.

The Greatness of Demetrious Johnson

Back in February, I composed my Top 10 Pound-For-Pound Power Rankings. Coming in at No. 1 was none other than Demetrious Johnson, who at the time had successfully defended his UFC flyweight title seven times. Make that eight now, as Johnson laid out former Olympic gold medalist Henry Cejudo at UFC 197 last Saturday. Johnson needed just 2:49 of the first round to finish Cejudo, delivering some sick knees to the body.

Johnson has not lost since 2011, and that was to current bantamweight champion Dominick Cruz when Johnson was fighting at 135, before there was a flyweight division. You can argue that Jon Jones is the GOAT and he is the No. 1 P4P fighter, but Johnson is still my choice. Check out all of his UFC finishes.