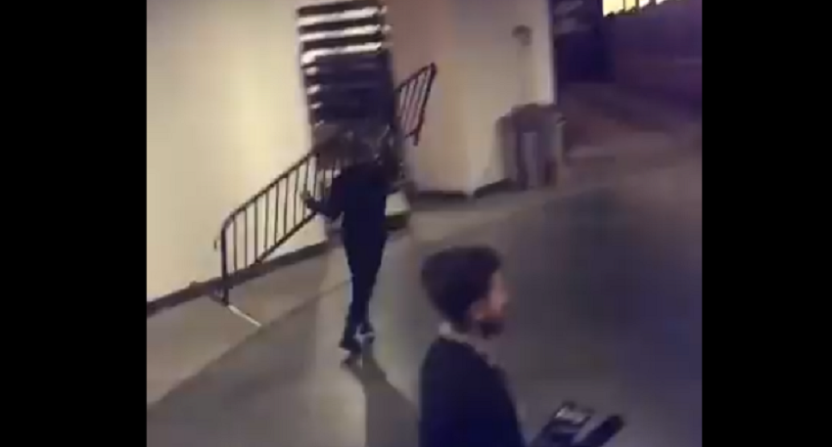 Conor McGregor is, well, notoriously a stirrer of shit, but he generally keeps things on the legal side, or at least right on the line. Today he may have crossed it entirely, attacking various buses and vans containing UFC fighters and personnel.

The incident reportedly took place in the loading dock at the Barclays Center, ahead of Saturday’s UFC 223. If you’re think it’s a publicity stunt, that’s usually the right instinct, but in this case at least one fighter set for a bout this weekend was reportedly injured by flying glass, which is not something the promotion would typically screw around with.

Conor McGregor stormed through Barclays, ended up in the loading dock of the arena with his entourage in tow and “swarmed” a bus that was leaving with UFC fighters and camps. Conor and crew were “throwing chairs, bike racks.”

Take a look, with the expected NSFW audio caveats:

And another angle, from inside a different vehicle:

@TheNotoriousMMA is about that life pic.twitter.com/kLRbMVzSzk

I’m told some of the fighters who were on the van are “shaken up.” They are still at the arena and Dana White, as well as local authorities, are there now.

I’m told Chiesa’s cut is on his face. Unclear how serious it is at this time. Most of the fighters have left the arena and are on their way back to the hotel, if not there already.

What a shitshow. This really could end with Conor McGregor arrested for assualt and battery. Ironic that a guy who works as a professional fighter and apparently wants to fight all the time hasn’t taken a UFC fight since November 2016.

And he might not be taking another one any time soon, if Dana White is to be believed, which is always a question:

A source has told me a tha Dana White turned up at the scene and said…. "Conor is in jail, he's done"

But hey, people are talking about UFC 223 now!

Conor McGregor was taken into custody and officially arrested at 10:23 pm ET. Multiple charges pending. He is currently at the 78th precinct in Brooklyn.