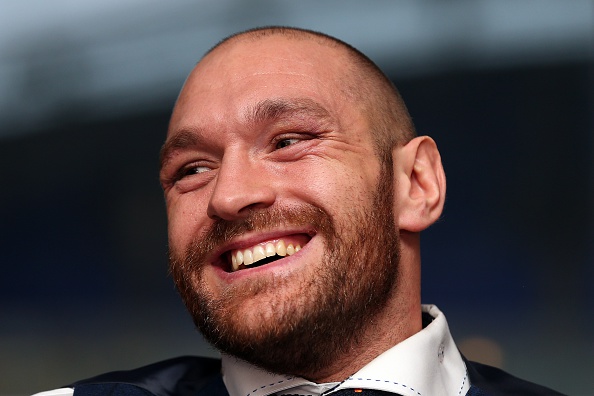 Newly minted heavyweight boxing champion Tyson Fury has never been one to mince words. Actually, that’s probably putting things a bit too diplomatically. Tyson Fury is a world class shit talker, and has been for years.

Two and a half years ago, when Fury was only a “contender” as opposed to a “kingpin”, he called out mixed martial arts and, specifically, then UFC heavyweight champion Cain Velasquez, calling MMA “rubbish” and “bullshit” and saying that Velasquez is “a little boy who doesn’t want to fight” and that he would “take [Velasquez] out”.

Now that Fury has a shiny new belt (or two, or three…who in the hell knows with boxing anymore) around his waist following his defeat of Wladimir Klitschko (another target of Fury’s scorn following some drug testing drama) last weekend, he’s back in the spotlight and once again calling out the sport of MMA and its fighters. Only now, Velasquez isn’t the UFC heavyweight champion, so Fury’s comments are directed more towards MMA as a whole.

Fury appeared on The MMA Hour with Ariel Helwani on Monday, and when asked about whether or not his opinion about mixed martial arts had changed since his initial comments, he confirmed that they had not.

“Not really. I think MMA is for people who can’t box, basically. That’s just my opinion on that. It’s not really entertaining for me. The only time it’s entertaining is when they stand up and punch each other. That’s what I think fans like as well.

“I don’t think anyone likes to see people roll about the floor. I think people want to see the stand-up punching. Even the referee when they’re on the floor to get up, get into it. I think I speak on behalf of a lot of people that the best parts of MMA is when they’re standing up and trading punches.”

Fury also admitted that he had talks with Bellator President Scott Coker about a fight, but his real desire is a fight with whoever holds the UFC belt.

“Me and Scott Coker had many conversations in the past about coming to Belltor and fight. I’m the heavyweight champion on the world in boxing and I’d like to unify and switch. I’d like to fight the UFC heavyweight champion. I’ve been calling Cain Velasquez out for two years and then he got beaten, so it showed you what I said was about right.

But is Fury interested in an MMA fight? Of course not. He wants a hybrid rules fight. Can’t let that fancy ground work get in the way of his boxing!

“I’m not really interested in a 100 percent MMA fight because obviously, they’re not going to stand up and bang with the heavyweight champion of the world, are they? They just want to take me to the floor. That’s not my forte. My forte is full, action-packed fighting whether it’s stand up, kick, punch – I call it ‘everything goes’ – or something like that. But not wrestling up and down the floor or whatever, rolling about. I’m not into that sort of stuff.”

There’s a lot to unpack here.

First off, there’s no chance in hell the UFC would consider a “hybrid rules” fight to accommodate Fury. Banning ground fighting would effectively take the “mixed” out of “mixed martial arts” and would turn a Fury fight into a boxing or kickboxing match, a venue he’d obviously thrive in compared to someone like current UFC heavyweight champion Fabricio Werdum, a Brazilian jiu-jitsu black belt and ground fighting savant.

Secondly, Fury has no reason to take a fight in Bellator if he really wants to prove his mettle against an MMA fighter. Bellator’s heavyweight champion is Vitaly Minakov, who hasn’t fought in the promotion since April of 2014 and could hardly be considered a household name. The most prolific heavyweights on Bellator’s roster are former street fighter Kimbo Slice and pro wrestler Bobby Lashley. Can Fury really pound his chest about beating up either of those two?

This is shit talking 101 from Fury, and the fact that we’re writing about it shows how well he’s mastered the craft. Pitch a ludicrous idea that no organization in their right mind would entertain? Check. Trash a competing sport? Check. Casually float the possibility of going to a desperate competitor no matter how absurd that seems? Check.

Tyson Fury is never going to fight an MMA fighter in an MMA fight, and that’s fine. That’s not what he does – he’s a boxer, and a damn good one at that. I just wish we wouldn’t focus so much on the “boxing vs MMA” argument that will never be settled and will never go away. It doesn’t matter that Tyson Fury could outbox Fabricio Werdum, or that Fabricio Werdum could outgrapple Tyson Fury – they’re competing in two different sports. Let’s let that be that and simply let them do their own thing on different courses in different sports. There’s no need for them to eventually collide.