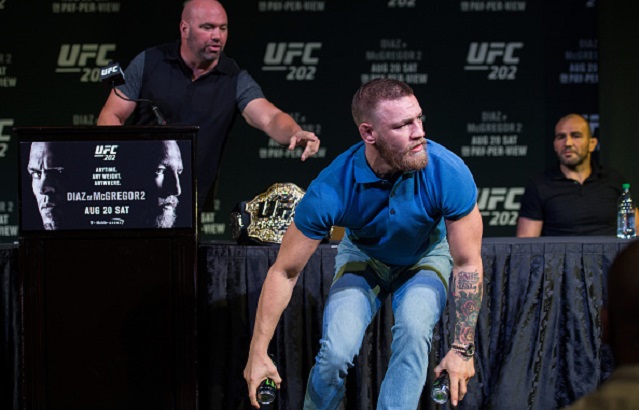 All the F-Bombs and water bottles have been launched. All the birds have been flipped and families thoroughly insulted. The run-up to UFC 202 is over and it’s time to get to the competition.

The main event is the rematch between Conor McGregor and Nate Diaz and that alone is worth the price of the pay-per-view, but that’s not the only reason to watch. Here’s all you need to know with our UFC 202 Preview.

Here’s a quick recap of the oddity that was the UFC 202 press conference.

Jake Shields is a member of The Diaz Bros. crew and widely considered to be one of the top grapplers in MMA history. He has won 31 pro fights and several different titles. But he must have spent all his time on the mats as a kid because he simply can’t throw. Jake is in the green shirt in the GIF below. Watch as he tries to throw a bottle at Conor.

He might have pulled up when someone darted into his path before throwing. Or he just can’t throw at all. You make the call!

Conor McGregor is Full Of… Himself

Props to Conor McGregor. He became the UFC featherweight champion in short order, just as he predicted. He is known as “Mystic Mac” for his uncanny predictions about his fights. He’s made a ton of money. But he should quit acting like he invented MMA.

“These f—in’ press conferences again. I don’t know what’s — I mean, I’ve made these press conferences, have helped shape what this is, and they’ve f—in’… they have gotten me kicked off cards before,” McGregor said at the presser.

He honestly thinks that he has “shaped” the UFC into what it is today? That’s laughable. McGregor didn’t want to fulfill his press obligations for UFC 200, so he “retired.” But Dana White is the wrong guy to play chicken with, so he yanked McGregor off the card. UFC 200 didn’t suffer much, if at all, from his abscence. Conor McGregor could never fight again and it would not matter one bit. The UFC would find new stars and continue to prosper. Georges St. Pierre stepped away. Jon Jones had legal troubles. Ronda Rousey is on an extended break. Anderson Silva had a long layoff.

The sport survived, the promotion survived. This idea that he is the alpha and omega is really ridiculous. He’s not above the game. Fulfill your obligations. Act like a professional. Show up on time. If you don’t like your contract, renegotiate before you agree to a bout.

McGregor is poetry in motion and a joy to watch. He’s as exciting a fighter as there is in the sport and certainly one of the best. He became champion. How about acting like one?

“No Love” is the UFC’s Next Big Star

Cody “No Love” Garbrandt will fight Takeya Mizugaki during the prelims on FS1. A rising star in the UFC, Garbrandt is 9-0 with eight knockouts and he’s coming off a first-round KO win over Thomas Almeida, who was undefeated heading into that fight and widely considered one of the top prospects in the UFC. Check out how he finished Almeida back in May:

Cody Garbrandt GOT HIM. Down goes Thomas Almeida in the first!#UFCVegas https://t.co/Qiu0RnA8px

That win vaulted him to No. 8 in the UFC bantamweight rankings and Garbrandt enters the fight Saturday as a +525 favorite. Garbrandt’s speed and power should be too much for Mizugaki and another first-round knockout looks to be in order. Mizugaki is tough as nails, but has a lot of miles on him and he’s lost two of his last three fights. The younger, faster bantamweights give him trouble and Garbrandt should shine again on Saturday night.

The nickname “No Love” was given to him by his uncle who watched him destroy fellow boxers, noticing he had no mercy for them and “No Love.” Speaking of nicknames…

Your MMA Nickname Battle of the Night

Tim “The Dirty Bird” Means vs. Sabah “The Problem” Homasi is a fantastic match-up with two fantastic nicknames. Means’ nickname has nothing to do with the Atlanta Falcons and he’s actually a Chicago Bears fan. (Sleeper in the NFC this year, I’m telling you.) Means says he dyed his hair once before a fight and a teammate told him he looked like a dirty bird. Like most nonsensical nicknames, it stuck. Means is known for his unique striking style and he can indeed get “dirty” in the cage. He won four straight before falling to Matt Brown at UFC 189, then came back and knocked out John Howard in his last fight. He’s fun to watch.

Homasi says his nickname is a way of life for him. His bio on UFC.com quotes him as saying “I’m just a problem in every way you look at it. Problem child growing up and everyone who knows me calls me a problem.” He’ll be making his UFC debut after competing on season 21 of The Ultimate Fighter. The bonus here is that Homasi ripped into Means during a recent interview, hoping that Means is “off the juice,” referring to Means’ recent six-month suspension after legitimately taking a tainted supplement.

Means told Bloody Elbow he has something special for Homasi on Saturday night. “You let little boy know only juice I’ve been on is apple juice, and I am going to embarrass him Saturday night for that comment.” Oh snap — this fight is going to be lit!

Someone Is Getting Slept in the Co-Main Event

While McGregor and Diaz grab the spotlight in the main event, the co-main event deserves more attention than it’s been getting. Top light heavyweight contenders Anthony “Rumble” Johnson and Glover Teixeira will do battle in a contest of the No. 1 and No. 2-ranked contenders. Johnson features the scariest power in the game. He’s 21-5, with 15 wins coming by knockout. He won nine straight fights before losing to Daniel Cormier in their championship fight at UFC 187. He’s started another winning streak since then, with first-round knockouts of Ryan Bader and Jimi Manuwa. There’s a short list of must-see fighters in the UFC and Anthony Johnson is on it.

Texeira lost in his title fight against Jon Jones back in 2014, then lost to Phil Davis in his next fight. Many pundits thought that Teixiera had risen as far as he could and at age 34, would be relegated to gatekeeper status. Many expected Ovince St. Preux to hand Teixiera his third consecutive defeat, but Teixeira choked OSP out in the third round of their main event battle last August. Texiera followed that up by knocking out Pat Cummins and Rashad Evans. Anthony Johnson is an entirely different beast, but Teixeira has power and a better ground game than Rumble. Do not be surprised if this fight is better than the main event.