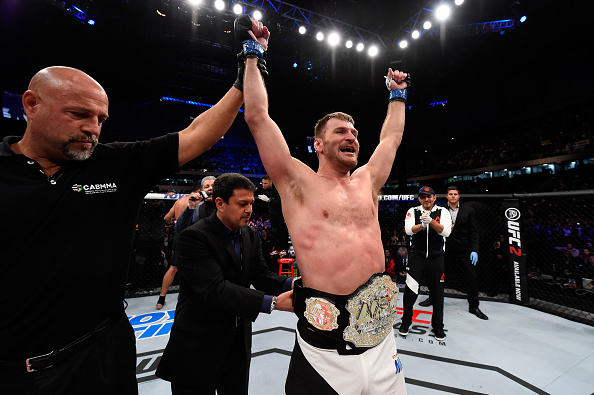 Oh Mickey, What a Pity

The UFC Embedded vlogs are incredibly well done, taking fans behind the scenes during fight week. In the last episode for UFC 203, viewers got to travel with Mickey Gall as he made his way to Cleveland for fight week. He gets a call from Dana White, who delivers some bad news: Gall’s request to have the 80s classic “Mickey” as his walkout song has been denied.

Every party has a pooper. Thanks, Dana!

Covering the regional MMA circuit in Illinois, I recall a professional boxer with over 30 professional fights get denied a license to fight MMA as a pro. The reason given was he needed to have some amateur MMA bouts before the commission would allow him to turn pro. He had wrestled in high school and learned Jiu-Jitsu from one of the top coaches in the game. But the commission thought he needed to fight amateur MMA first, where he surely would have destroyed anyone put in front of him. It was nonsense. But the state of Ohio has made some generous exceptions to their requirements, allowing CM Punk to fight as a pro without ever competing as an amateur.

The Ohio commission requires five amateur MMA bouts before you can turn pro, although waivers may be issued at the discretion of the commissioner. That is how Punk gets a pro fight in the UFC. But Erik Magraken of CombatSportsLaw.com found something else in their code that can’t be waived, but is being ignored.

“Masters division: applies to all amateur mixed martial arts contestants ages thirty-five and over. They must compete in this division until they have competed in a minimum of three events. After three events and a winning record they may apply to the executive director or commission to be able to compete in all levels of amateur or professional competition.”

Punk does not meet that criterion and a waiver is not available, per the code. But because he is CM Punk and it’s the UFC he is being allowed to fight. If his name was simply Phil Brooks and he had no star power, he would never be issued a license. That impropriety pisses some people off. When asked about it, it pissed Punk off, too.

CM Punk was offered an opportunity and he took it. No one blames him for this. But when asked about the hubbub surrounding his license to fight professionally, Punk took exception.

“I don’t know anything about that. I also don’t really care,” said Punk. “To me, it’s out of my hands. I don’t know why people care, like if you’re not me, and you’re not the guy fighting me, why the hell are you so invested? Are we tarnishing the sport where people try to break each other’s faces?”

I find this interesting because CM Punk sure thought a lot of people cared about the perceived slights and disrespect he “suffered” during his time in the WWE. His famous “Pipebomb” has been seen by many far and wide.

Punk said that the reports were made by a specious group of wannabe reporters.

“They’re hack journalists who f—ing want to stir up a bunch of s–t for no reason because they don’t get invited to this.”

So just to get this straight: if it’s a plus for Punk, it doesn’t matter what’s right and wrong and people are just jealous and stirring the pot. But if Punk is the recipient of something he deems improper, he’ll sit down, grab a mic and tell the whole world about it, on TV, on podcasts and more. Got it.

The Main Event of the Evening

Stipe Miocic beat LeBron James in the race to bring a title home to Cleveland, winning the UFC heavyweight belt in May. He’ll make his first title defense against Alistair Overeem at UFC 203, and he’ll get to do it in front of his hometown fans.

This was one of my 10 Can’t-Miss UFC Fights in September, and not just because it’s a title fight. Miocic is coming off three straight knockout wins, but Overeem is a legend in the sport, having fought around the world and in the famed PRIDE promotion in Japan.

He has over 40 professional wins, but a UFC title would be the crowning achievement of his career. Miocic may be the champ, but as I noted in the other piece, Overeem has been in the cage with some of the best fighters in MMA history: Shogun Rua, Brock Lesnar, Chuck Liddell, Mark Hunt, Fabricio Werdum, and Vitor Belfort — just to name a few. Overeem has won four straight and beaten two former UFC heavyweight champs in the process. Overeem has not been outstruck in a fight since 2011 and he is hard to hit cleanly. He rarely takes a lot of damage. This should be an outstanding title fight.

Your MMA Nickname Battle of the Night

We need to conjure up some translation for our UFC 203 nickname battle of the night. It features former UFC heavyweight champ Fabricio “Vai Cavalo” Werdum against Travis “Hapa” Browne. “Vai Cavalo” is Portuguese for “Go horse.” Browne’s “Hapa” nickname refers to a person of mixed Asian or Pacific Islander heritage. Browne lives in California now, but he is from Honolulu. He’s also dating Ronda Rousey.

This is a rematch of their 2014 fight, which Werdum won via unanimous decision, easily walking through Browne. “Hapa” has lost three of his last five fights, and he badly needs a win to keep both his top-10 ranking and a title shot alive. Werdum lost the belt to Miocic right after winning it from Cain Velasquez, and he wants another shot at the title. Both men will be hungry and there is a lot on the line. This is the co-main event of the evening, though it could lead a card.