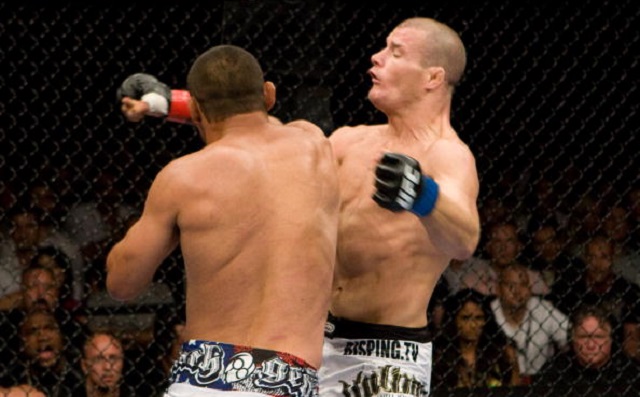 The main event of UFC 204 features a rematch over seven years in the making. Michael Bisping will make his first title defense against Dan Henderson, who knocked Bisping out at UFC 100.

This time, the UFC middleweight championship is on the line. Here is your UFC 204 preview.

The Punch Heard Around the World

Dan Henderson absolutely annihilated Michael Bisping back at UFC 100 with a brutal knockout, one many consider to be the greatest in UFC history. Let’s take a look at the historic finish.

The body goes stiff. The breathing gets agonal. It was a devastating knockout, but then Hendo landed that one extra shot to seal the deal. He said he wouldn’t normally throw that last punch, but he badly wanted to shut Bisping up. He did, at least for a while. The first fight was over seven years ago.

Henderson, for all his accomplishments, has yet to win a UFC title. This is his one and only chance with retirement — and AARP — knocking on his door. Bisping will defend his title for the first time and if he loses, it’s doubtful he will ever hold a UFC title again. There is so much on the line: legacies, pride, and the UFC middleweight championship. Most main events are significant, but this one is special.

You Talk Too Much

Bisping amped up the trash talk at the awkward media day face-off. It was kind of corny, and Hendo actually gets the last zinger.

Bisping drops some comments about Henderson being soft in the middle and has to throw in a barb about Henderson no longer being on TRT (Testosterone Replacement Therapy). Bisping’s mouth probably just bought him an extra right hand. Or two. Hendo had the best line of the quick face-off. Bisping says that the belt is “staying right here.” Hendo replies, “They’ll just give me a new one.”

Bisping let loose some of his best comments during the UFC Unfiltered podcast, basically throwing some hard truths about what he wants to do.

“The UFC’s middleweight division can go f*** themselves. I’ll do what’s right by me. And what’s right by me is beating the f*** out of Dan Henderson, and beating the f*** out of a few more people as well and getting paid. When I decide to retire, whether or not it’s with the belt or without the belt, I don’t give a f*** if it’s the best thing for the UFC middleweight division.”

The harshest words were saved for his opponent on Saturday night.

“Dan Henderson’s full of s***. If Dan Henderson wins this fight, he ain’t gonna retire, and that’s a fact. Dan Henderson is saying that he’s gonna retire because he knows he’s not gonna win this fight. There’s a reason why he says he’s going to retire. That’s because his body is too old and beat up. He can’t take steroids anymore. He can’t manipulate the system. He can’t cheat. So he’s saying, I’m f***ing done.”

The co-main event of UFC 204 features a middleweight clash between two top-10 fighters: Vitor Belfort and Gegard Mousasi, and it has “Fight of the Night” written all over it. Mousasi told Severe MMA why he will one day be the UFC middleweight champion.

“I was coming off two ACL surgeries, so it took me a while before I was back to myself and now I’m at my best. Thanks to USADA I’m going to be champion soon.”

USADA is the United States Anti-Doping Agency, which has the task of testing UFC fighters for PEDs and drugs. Mousasi thinks he will excel in what is now a level playing field with no TRT exemptions and stricter testing for PEDs.

Belfort is a pioneer/legend/OG in MMA. His resume is amazing, with wins over Luke Rockhold, Dan Henderson, Anthony Johnson, Michael Bisping, Rich Franklin, and Randy Couture, just to name a few. He is a fight finisher with 21 of his 25 wins ending before the final bell, 18 knockouts among them. His UFC debut was back at UFC 12 in 1997. He fought twice that night and won the UFC heavyweight tournament, needing just a combined two minutes to register two first-round KOs, and he did it at the age of 19. No one has more knockouts or finishes than Belfort in UFC history.

Bisping vs. Henderson is the main event and rightfully so, but the next middleweight champion could come from the co-main. Don’t be surprised if it steals the glory.

Your UFC 204 MMA Nickname Battle of the Week

This week’s best MMA nickname battle features Danny “Hot Chocolate” Roberts and Mike “Platinum” Perry. Someone’s “0” has got to go, at least as far as UFC records are concerned. Neither fighter has lost in the Octagon with Perry winning his debut at UFC 202 and Roberts winning both his UFC fights.

Perry was all over Hyun Gyu Lim early in round one and got him in one of the most undesirable positions in MMA: the mounted crucifix. That’s when you are on top of your opponent laying across their body and have both of their arms pinned, rendering them unable to defend strikes. Perry got the TKO win shortly after that and he is definitely a fighter to watch. Roberts quickly submitted Nathan Coy in his UFC debut then followed that up with a “Fight of the Night” performance against Dominique Steele.

Hot Chocolate vs. Platinum is not only a great nickname battle, this will be a great fight between two hungry prospects.

Five other fighters you’ll want to watch at UFC 204.