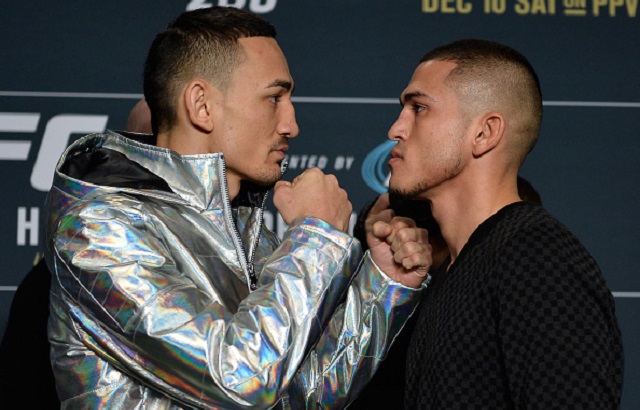 UFC 206 goes down Saturday night in Toronto and the card is filled with crowd-pleasers like Donald “Cowboy” Cerrone, Matt Brown, Anthony Pettis, Max Holloway, and the latest rage in the UFC — Dooho Choi, better known as “The Korean Superboy.” As the one and only Dr. Steve Brule says, “Let’s check it out!”

The UFC has never had a Korean champion, but people are getting amped up about Dooho Choi. The 25-year-old looks like he’d kill you with kindness before he’d do it with his fists, but don’t be fooled by the boyish, innocent look — “The Korean Superboy” is a deadly force. His only loss came back in 2010 as a 19-year-old, and he’s won 12 straight since then.

Choi is 3-0 in the UFC with three first-round knockouts. Saturday night, he’ll face a very dangerous man in No. 4-ranked featherweight Cub Swanson, and a win vaults him into the top-10. This qualifies as a “can’t miss” fight.

Interim titles suck. Interim title fights do not. Former UFC lightweight champion Anthony “Showtime” Pettis will fight Max “Blessed” Holloway for the UFC interim featherweight title in the main event, with the winner getting a shot at Jose Aldo for the real title — the one stripped from Conor McGregor.

Interim titles don’t mean too much, other than the winner will fight for a title at some point. But for some reason, they keep dragging them out. What’s most important is that these are two of most talented strikers in MMA and they both work at a fast pace. Holloway will throw in volume, whereas Pettis is the more dynamic striker. Holloway has some of the best footwork in MMA, and as such he’s difficult to hit cleanly. Pettis is just 1-3 in his last four fights, but that encompasses his recent move down to featherweight and back-to-back losses at 155lbs. Holloway has won nine straight fights, including impressive wins over contenders Ricardo Lamas, Jeremy Stephens, Charles Oliveira, and Cub Swanson.

This should be an epic battle of two well-skilled fighters, and a main event worthy of your time and hard-earned cash. Or your mom’s cash. Any cash will do, really.

UPDATE: Pettis missed his weight by three pounds at weigh-in, which has added an interesting qualification to this bout:

I'm told the fight is still on. Holloway, if he wins, gets interim title. Pettis won't if he wins. He also gives up 20% of his purse to Max.

The co-main event of UFC 206 features two fighters who always look for the kill shot: Matt “The Immortal” Brown and Donald “Cowboy” Cerrone. Brown has scored 12 knockouts in his 20 wins, and Cerrone has posted consecutive knockout wins since moving up to welterweight. This is probably the biggest “Don’t blink” fight on the card, and Brown would love to smash Cowboy.

“Most of my opponents I’m real respectful to and I think they’re respectful to me. I don’t know if he means it or not. I don’t know if he’s just a douchebag of a person, but I get the feeling that when he’s talking to other people, especially other fighters, that he feels like he’s above other people, and he’s kind of a bully,” Brown told MMAJunkie.com.

Speed kills, and Cerrone has it. He also has striking accuracy and a tremendous ground game. Brown’s break-neck pace can throw fighters off their games, but Cerrone is much too experienced to let that happen. This fight should end before the second round is finished, and I think it’s Cerrone who will get his hand raised.

Your UFC 206 Nickname Battle of the Week

The UFC Nickname Battle of the Week pits Lando “Groovy” Vannata against John “The Bull” Makdessi. Vannata turned some heads with a gritty performance against Tony Ferguson in his UFC debut, a fight he took on short notice. He lost that fight — the first of his career — but he’ll have a better shot at a win against Makdessi, who is a good fighter, but not on the level of Ferguson.

Makdessi has good power and more fights in the UFC than Vannata has in his entire pro career, but Vannata has advantages in his youth and speed. Makdessi needs a statement win, and Vannata needs to notch his first UFC win. This will be an entertaining bout on UFC Fight Pass during the prelim fights.

Five other fighters you’ll want to watch at UFC 206: