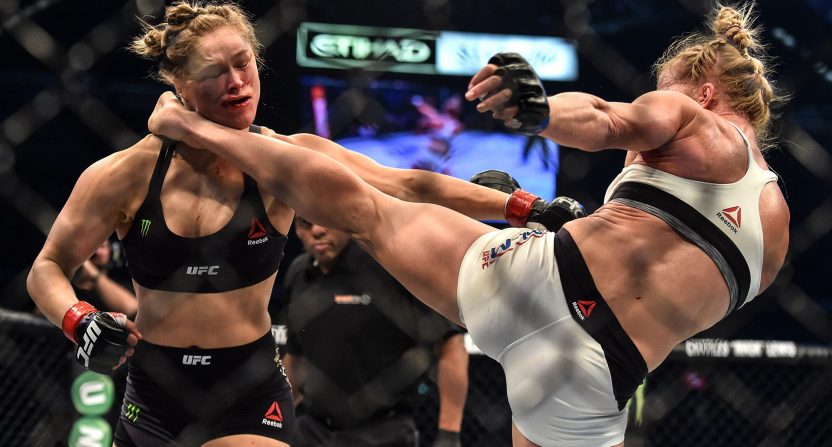 History will be made Saturday night in the main event no matter who wins the fight. UFC 208 will feature the first-ever UFC women’s featherweight title as the promotion begins to build the new division. Holly Holm will face Germaine de Randamie in a battle of two kickboxers. It should be an exciting fight for both the hardcore and casual fan, as it’s unlikely there will be any grappling. Holm is famous for being the first fighter to dethrone former champ Ronda Rousey, winning the UFC bantamweight title in the process. Her reign was brief, lasting less than four months as she relinquished the title in her first defense, submitting to Miesha Tate at UFC 196. She then dropped a unanimous decision to Valentina Shevchenko in July, meaning she will fight for a title coming off consecutive losses.

de Randamie is a kickboxing/Muay Thai specialist from the Netherlands, and she has gone 3-1 in the UFC, her only loss coming against UFC bantamweight champion Amanda Nunes back in 2013. de Randamie is a very decorated fighter having gone 46-0 in Muay Thai fights, as well as holding 10 titles. Nicknamed “The Iron Lady,” de Randamie is sure to give Holm the type of fight she wants: a stand-up, in-your-face battle between two of the best strikers in the game. The winner gets to be the first-ever UFC featherweight champion. Then a wave of fear shall eclipse the joy of winning the title because waiting in the wings is…

Cris Cyborg. That’s who’s waiting. Cyborg is one of the most destructive forces to ever fight MMA, and depending on the outcome of her recent USADA violation, she is almost certain to be the next challenger for whoever wins the title. Both Holm or de Randamie would likely serve as the toughest opponent of Cyborg’s career, and that is a fight I think most fans are dying to see.

It’s insane to think that Anderson Silva has not registered a win since 2012, although there have been some weird occurrences that have gone into that. He suffered the devastating leg injury in the rematch with Chris Weidman, and put down current champ Michael Bisping in their fight last year, only to have the bell sound before he could put one last lick on Bisping. He also stepped in to face Daniel Cormier just weeks after gallbladder surgery to save the UFC 200 card after Jon Jones had to withdraw. MMA is still a young sport, and whether or not these late-career losses tarnish legacies is open to debate. But I still think of Silva as the GOAT and I won’t judge him on his career past age 40. Nobody thinks of Willie Mays on the Mets or Jordan on the Wizards, why should we do so for fighters? But it would be incredibly sweet to see Silva go out and knock out contender Derek Brunson on Saturday, just to put the cherry on top of one of the best careers in MMA history.

Your UFC 208 Nickname Battle of the Week

Your UFC 208 Nickname Battle of the Week will take place in the flyweight division, a match between Ian “Uncle Creepy” McCall and Jared “The Monkey God” Brooks. McCall is a former title contender who got his nickname from his friend’s son. “My friend, his son calls me “Uncle Ian,” and he just ended up calling me “Uncle Creepy” one night when I was trying to put him to bed. He wanted to play with a skateboard at like three in the morning, and he just called me Uncle Creepy and everybody heard. Pro tip for McCall and his friend: you should probably get children to bed before 3 am, just sayin’. I wasn’t able to source the origin of Brooks’ “The Monkey God” nickname, but I just love it in a world of mostly repetitive and lame nicknames.

Besides calling McCall a f-g the first time they met, Brooks took to Twitter for the most original of social media barbs: the mother joke.

Brooks’ age is listed as 23, but his insult game is at a remedial third-grade level. Sometimes fighters making their UFC debuts lash out due to nervousness. Sometimes they are just dicks. Brooks is 12-0, so maybe he can back up all the trash talk. But he has lit a spark under McCall, who has had many fights canceled recently and is dying to make a statement to prove he is still relevant in the flyweight division. If McCall sinks in a choke I won’t be surprised if he holds it just a bit longer than he should after the tap.

Just like Greg Focker, UFC fighter Phillipe Nover is a male nurse. I don’t think Jack Byrnes would take that type of tone with Nover though, who is pumped to be fighting in front of hometown fans in Brooklyn. He also loves his gig. “I love training, I love saving people’s lives at work, and I’m going to keep pushing as far as I can and hopefully be an inspiration to a few people.”

Nover never lived up to the hype of being “The Next Anderson Silva,” a label that was completely unfair to him when he was just 24, and his MMA career has been underwhelming. He lost three straight fights during his first stint in the UFC, came back in 2015 and won his first fight but then lost his next two. A loss on Saturday against Rick Glenn could once again be the end of Nover’s UFC career. While his career hasn’t gone as smoothly as he hoped, Nover is a good dude that loves helping people. That’s just a bit more important than winning a fight.

Five other fighters you’ll want to watch at UFC 208.