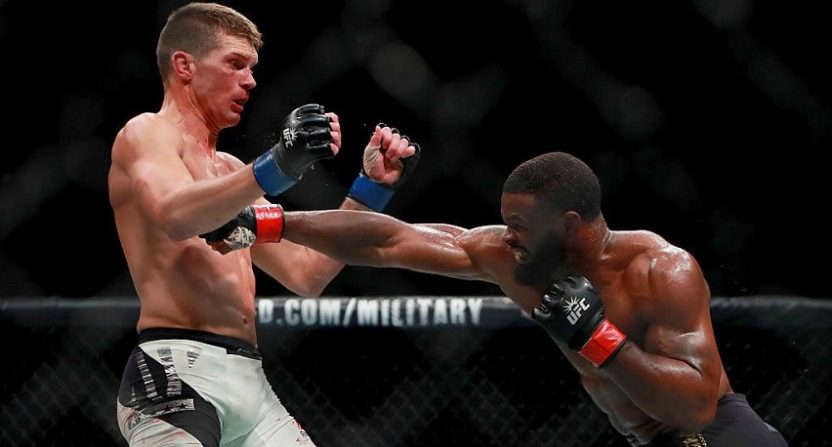 UFC 209 goes down Saturday night in Las Vegas and the main event is a rematch of the fantastic battle between UFC welterweight champion Tyron Woodley and top contender Stephen “Wonderboy” Thompson. The co-main finds Khabib Nurmagomedov looking to improve to 25-0, while old school warrior Mark Hunt and Alistair Overeem go to war in a rematch of their 2008 fight.

Champion vs. No. 1 contender for the title — in a rematch? It doesn’t get much better than that, which is what fans will get with the UFC 209 main event: UFC welterweight champion Tyron Woodley defending his title against (No. 1) Stephen “Wonderboy” Thompson. The two fought to the rare majority draw in their first fight at UFC 205, which allowed Woodley to retain his title. Woodley did the most damage in the fight and had the only takedown and knockdown of the fight. It was a thrilling bout and it was awarded “Fight of the Night.”

But as great as it was, fans — and mostly Thompson — pined for the rematch. Dana White agreed that it made the most sense. Before the fight was booked Woodley entertained the idea of fights with Michael Bisping, Conor McGregor, and Georges St-Pierre, but in the end, this fight had to be run back.

Woodley is a tremendous blend of speed and power, a fantastic wrestler with exceptional ground and pound and destructive power in his hands. Thompson is more dynamic with an assortment of kicks that come from what seems like a myriad of different angles. Both fighters are unique, and they are the best in the welterweight division. To see them do this all over again is quite the treat for fight fans. Enjoy it Saturday night.

The UFC has released the first fight to the public. Click here to see UFC 205: Woodley vs. Thompson. But only after you read the rest of this piece.

Why You Gotta Be So Mean?

Woodley and Thompson sat down for an interview on ESPN’s new SC6 with Jemele Hill and Michael Smith, and it’s not off-the-charts trash talk, but it doesn’t disappoint either. Woodley accuses Wonderboy of some fuzzy math, and tells him “Maybe you should have gone to college.” Wonderboy asks Woodley, “Why ya gotta be so mean?”

The Co-Main Event: The Eagle vs. El Cucuy

The co-main event features undefeated Khabib “The Eagle” Nurmagomedov (24-0) against Tony “El Cucuy” Ferguson, who is one of the best fighters to ever come out of “The Ultimate Fighter” reality show.

Every fighter in the UFC is fierce and deadly. Then there are these two. Khabib simply punished contender Michael Johnson in his last fight, taking him down repeatedly and laying down some severe ground and pound. At one point, he was talking to Johnson while he was on top of him and beating on him, then had some words for Dana White and “his boy” Conor McGregor between rounds:

Ferguson has won nine straight fights and he finished six of them. Ask fight fans and fighters to compile a list of the most exciting fighters to watch and my guess is Ferguson makes every list. He dominated former UFC lightweight champion Rafael dos Anjos by landing 199 strikes against him over five brutal rounds. The Nurmagomedov-Ferguson bout could steal the show on Saturday.

Take a physically-imposing UFC fighter. Sit him down in a chair. Ask him to offer thoughts on popular rom-coms. Hilarity ensues.

Hunt vs. Overeem in Battle of OGs

(No. 3) Alistair Overeem vs. (No. 8) Mark Hunt is a battle of two veterans who clashed before back in 2008. Overeem beat Hunt that night in Japan, submitting him in just over a minute. Overeem has been fighting MMA professionally since 1999 when he was just 19. Hunt has been in the game since 2004, and he is now 42.

These are two OGs who have been at it for a very long time, both still trying to remain contenders in the UFC heavyweight division. Overeem has been busted for PEDs before and Hunt has been extremely vocal about how the sport needs to clean up and do away with PED users. Asked by Sherdog to give his thoughts on the fight, Hunt said Overeem will get knocked out. “‘Cause he’s got no steroids.” Hunt also has a gameplan if Overeem tests positive for PEDs after the fight. “I’ll sue his black ass.”

Hunt also has a lawsuit pending against the UFC and Brock Lesnar due to Lesnar’s positive tests after they fought at UFC 200, alleging racketeering, fraud, and other malfeasance. But once Saturday night gets here, it’s just two of the best heavyweights in the world going to war in a cage. Nobody hits like Mark Hunt, and this fight should have a highlight-reel finish.

Your UFC 209 Nickname Battle of the Week

If your nickname contains a pun, that means it’s so bad it’s good. Such is the case with Mark “The Hand Of” Godbeer, who will take on Daniel “Daddy Long Legs” Spitz in a matchup of two heavyweights.

Godbeer told UFC.com his nickname “Came about after numerous KOs.” That makes sense. But I’m wondering why he hasn’t got into the craft beer industry. Godbeer. Are you kidding me? That would make a killing, especially with fight fans in the UK, Godbeer’s native land.

Spitz will be making his UFC debut, but he doesn’t seem all that concerned with his opponent. “I’ve watched a lot of his fights and he seems like your generic British kickboxer. He has no ground game and tries to land the big overhand right. He probably has power, but it’s the heavyweight division — everyone has power.” Spitz will try to use those “Daddy Long Legs” to try and lock Godbeer up in a triangle choke and he is 5-0 with three submission wins. This fight will lead off the FS1 prelims.

The early prelims get started on UFC Fight Pass, aka “The Netflix for Fight Fans” at 6:30 p.m. ET. The prelims move to FS1 at 8 p.m. ET, and then the main card can be seen on pay-per-view beginning at 10 p.mET.