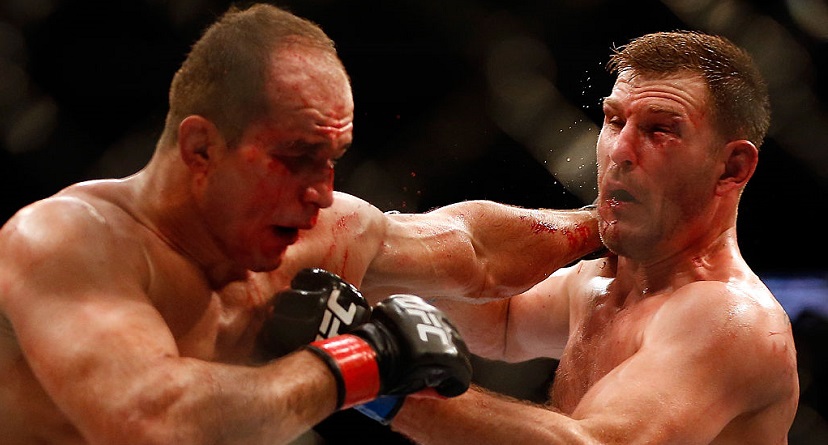 Stipe Miocic looks to defend his heavyweight title for the second time on Saturday night. He beat Fabricio Werdum at UFC 198 to take the strap, then knocked out Alistair Overeem at UFC 203 in his first defense. He’ll have to beat former UFC heavyweight champion Junior Dos Santos to retain his title, and that just happens to be the last man to beat him. Dos Santos beat Miocic at the end of 2014 when the two headlined a UFC on Fox card. The fight went all five rounds and Dos Santos earned a unanimous decision win, but he has fought just twice since then and has not been in battle for more than a year.

Speed, power, and boxing are the main weapons for both of these fighters, and the last time they met they were awarded Fight of the Night bonuses. Dos Santos threw and landed more punches in that fight and he stuffed Miocic’s takedown attempts time and again. But a lot has changed since the last time they fought. Miocic is the champ and seems to be just hitting his stride, while Dos Santos no longer looks like the killer he once was, going just 3-3 in his last six fights. I think Miocic takes it, but this should be an all-out war that will thrill fans.

Joanna Jedrzejczyk Will “Bring You Hell”

Strawweight champion Joanna Jedrzejczyk won her title at UFC 181 in Dallas when she laid a vicious beating on then-champion Carla Esparza. She’s back in Dallas on Saturday night, this time looking to defend her title for the fifth time. She’s known to get in her opponent’s faces and talk trash, but she says it’s all up to her opponent how the pre-fight hype gets built.

“If you want to play the game with me, I’ll let you play. But believe on the day of the fight I will bring you hell,” Jedrzejczyk said at UFC 211 media day.

Jessica Andrade has won three straight and hopes to hand Jedrzejczyk her first defeat, but there’s nothing that can prepare a fighter for the pace and volume coming their way from the champ. Jedrzejczyk has landed at least 170 strikes in each of her last three fights. She would have made that four straight, but she finished Jessica Penne in the third round of their title fight after she had landed over 125 strikes.

Fighters and fans alike love to watch the champ work because she is technically sound and fires off combination after combination. It’s not uncommon for her to throw more punches in round five than she does in round one, a testament to her will and outstanding conditioning. Simply put, she is one of the best things going in MMA today, a true champion that will take all comers. I expect her to put on another show against Andrade and I expect her to remain champion and do so in a dominant fashion.

Former UFC lightweight champion Frankie Edgar will fight wunderkind Yair “El Pantera” Rodriguez in a crucial fight in the UFC lightweight division. Edgar was the champ back in 2010 when he became the first lightweight to beat UFC hall of famer BJ Penn. It was a significant moment in UFC history, and Edgar beat him again in the rematch. Edgar moved down to featherweight after back-to-back losses to Benson Henderson, and he’s been successful in that division. He challenged Jose Aldo for his title at UFC 200, but came up short. He is currently ranked No. 2 in the division, and would love another shot at Aldo or interim champ Max Holloway. He’ll have to get by Rodriguez first, which could be a tall order.

Rodriguez is one of the most exciting fighters in the UFC, and his dynamic style is simply thrilling to watch. Check out this quick highlight reel:

This fight could easily headline a pay-per-view, which indicates how strong this card is. Edgar is a grinder, the type of fighter that can break your will, eat your soul, and beat you up all at once. It will be interesting to see if Rodriguez can survive in the deep waters and if his unique striking style can work against the solid defense of Edgar.

Your UFC 211 Nickname Battle of the Week

Your UFC 211 Nickname Battle of the Week pits Chase “The Vanilla Gorilla” Sherman against Rashad “Daywalker” Coulter. Sherman’s nickname refers to his massive size as well as his lighter hue. Coulter’s nickname also refers to his skin tone, but for a different reason. He got his nickname from Bellator fighter King Mo.

“He always said I was the palest black person he knew,” according to Coulter. “Said I was pale as a vampire and I am Daywalker because I am a pale vampire that can walk in the daylight.”

This will be Coulter’s UFC debut and all eight of his wins have come by knockout. Sherman is 0-2 in UFC competition and if he loses to Coulter he may be in need of a new promotion.

Five other fighters you’ll want to watch at UFC 211.

The early prelims begin on UFC Fight Pass at 6 p.m. ET. The prelims move to FX at 8 p.m. ET, and then the main card can be seen on pay-per-view at 10 p.m. ET. This is one of the best cards of the year so don’t miss it!