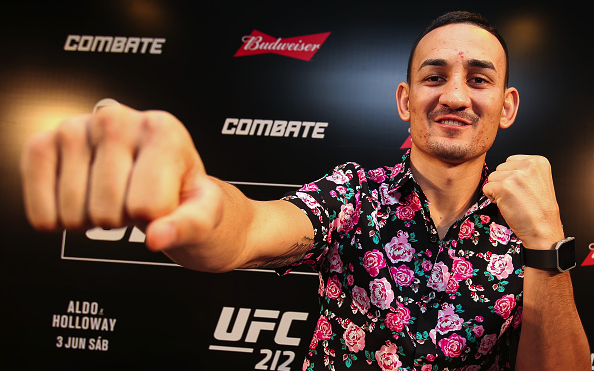 UFC 212 goes down Saturday in Brazil and the main event featuring Jose Aldo vs. Max Holloway for the UFC featherweight title is must-see TV. Plus, #1 Claudia Gadelha and #2 Karolina Kowalkiewicz meet in a battle of strawweight contenders to see who will get another shot at Joanna Jedrzejczyk, and MMA legends Vitor Belfort and Nate Marquardt square off in what is perceived to be the swan song for Belfort.

Jose Aldo and Max Holloway should be nothing short of amazing. This has Hearns/Hagler written all over it, with two exceptional strikers going to war. Both fighters excel at takedown defense and it’s nearly impossible to get them down — and even harder to keep them there. This should be five rounds of fast-paced, high-level striking between the two best featherweights on the planet.

Aldo will forever be tainted by his knockout loss to McGregor, but his legacy is already cemented should he never win another fight. He was the best featherweight on the planet for years. He won 15 straight fights and defended his title successfully nine times. He came back from the McGregor loss to easily best former UFC lightweight champion Frankie Edgar, outstriking him and stuffing all 11 of his takedown attempts.

He’s gone five rounds on seven different occasions. He holds nearly all of the UFC featherweight records, including wins, knockouts, and knockdowns. Simply put, Aldo is a lock for the UFC Hall of Fame and he’s still only 30 years old.

Holloway also presents some outstanding credentials. He has won 10 straight fights since losing to McGregor in a non-title bout back in 2013, with seven stoppages in those 10 wins. Only McGregor averages more significant strikes per minute in the cage. His last five wins represent how great Holloway has become: Anthony Pettis, Ricardo Lamas, Jeremy Stephens, Charles Oliveira, and Cub Swanson. He can fly under the radar no more.

If you’ve never heard of him or haven’t paid close attention to his fights, you should watch this fight on Saturday. The featherweight division will finally have a fighting champion again, and this could be the next great rivalry in MMA.

The Co-Main Event: Gadelha vs. Kowalkiewicz

No. 1 Claudia Gadelha vs. No. 2 Karolina Kowalkiewicz is an incredibly important fight for both fighters and the UFC strawweight division. This fight will likely determine who gets the next shot at the title.

Both ladies have gone up against champion Joanna Jedrzejczyk before and both have tasted defeat. Gadelha has two losses in his career and both have come at the hands of the champ, one in a title fight. Kowalkiewicz has lost just once in her career, and that was in the title fight against Jedrzejczyk. Gadelha is the favorite here due to her stellar wrestling and ground game.

Kowalkiewicz is proficient at turning away takedowns, but it remains to be seen if she can do that against Gadelha, who is by far the best wrestler she has ever faced. The winner isn’t assured of a title fight against the champ, but a loss will certainly put another year between them and a shot at the title, maybe longer.

But most important is that these are two of the best fighters on the planet and their backs are up against the wall. Win and likely get the next shot at the champ. Lose and it’s back to the grind of churning out wins to get back to the top of the division. The advantage on the feet goes to the Pol and the Brazilian has the advantage on the ground. This is an incredibly intriguing fight and I’d be extremely surprised if it isn’t a thriller.

Old Man, Look at My Life

Vitor Belfort is a legend in MMA. His first pro fight was in 1996 as a 19-year-old and he’s been taking all comers ever since. His career is like a history book of MMA. He’s had five title fights and won two. The list of the fighters he’s faced is unmatched by any other combatant: Dan Henderson, Jon Jones, Chuck Liddell, Randy Couture, Anderson Silva, Tito Ortiz, Chris Weidman, Jacare Souza, Wanderlei Silva, Alistair Overeem and more. Calling his career prolific is an understatement.

Initially, this was supposed to be a farewell fight for the legend, but now Vitor is hinting at continuing his career in the UFC or possibly elsewhere. He would like another shot at Wanderlei Silva, who is now under the Bellator banner. First up, though, is Nate Marquardt, a former champion who is also on the last legs of his fighting career. Most fans love to see fights finished and that will assuredly be the case here. Neither of these fighters has the chin that they used to, and both have long been known as deadly strikers, so someone is going to sleep in that cage on Saturday night.

Your UFC 212 Nickname Matchup of the Week

We got ourselves a fun one this week. Antonio Carlos Junior, aka Cara de Sapato, will take on Eric “Zebrinha” Spicely. Carlos Junior’s nickname literally translates to Shoe Face.

“I was given that name by Ricardo Vieira when he was giving a seminar at the academy where I train. Ricardinho is famous for giving everybody nicknames and in Brazil you are stuck with nicknames for the rest of your life,” Carlos Junior told BJJEE.

Spicely’s “Zebrinha” nickname also came from a Brazilian, one who is fighting on this card with him. Claudia Gadelha gave him the nickname when she was his coach on The Ultimate Fighter. That’s a good thing because he was formerly known as “The Dream Catcher,” which sounds more like a pop music star than a vicious MMA fighter. This is a battle between two Brazilian Jiu-Jitsu black belts and it should be a fun fight to watch.

Five other fighters you’ll want to watch at UFC 212.