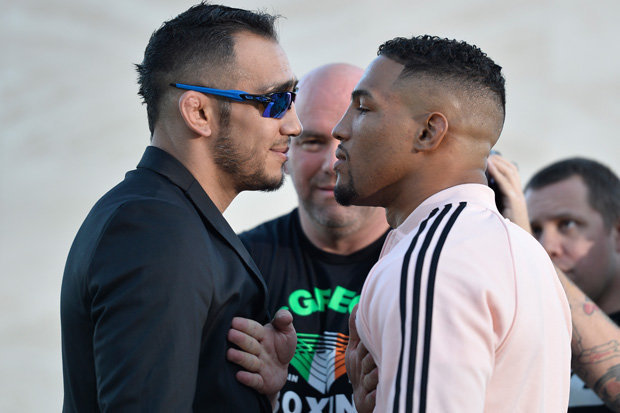 UFC 216: Ferguson vs. Lee goes down Saturday night in Las Vegas with a main event featuring two of the best fighters in the UFC, and they just also happen to be two of the best trash talkers in the game. Both fighters cut promos that would make WWE superstars get up and applaud. We have samples!

Plus, Demetrious “Mighty Mouse” Johnson looks to set one of the greatest records in MMA history. Let’s break it all down with your UFC 216 preview.

The Main Event: Ferguson vs. Lee

While Conor McGregor smiles and counts all his money, the fallout of the MayMac fight continues for the rest of the lightweight division. It’s unknown when McGregor will fight again in the UFC, so until then, we get an interim title fight between #2 Tony “El Cucuy” Ferguson and #7 Kevin “The Motown Phenom” Lee.

Ferguson is the former The Ultimate Fighter champion who has blossomed into one of the very best — and most electric — fighters in the UFC. He’s won nine straight fights and hasn’t lost in over five years. He had his way with former lightweight champion Rafael dos Anjos in his last outing, a performance for which he received Fight of the Night props. He landed nearly 200 strikes in that bout but his ground game is just as effective as his stand up. Lee has been making his way up the rankings with five straight wins, finishing the last four. You’ll likely remember him from the dust-up he had with Michael Chiesa at the summer press conference. He then went and choked Chiesa out in the first round.

Ferguson barks that Lee has not faced the top of the division like he has. Lee thinks he’s better than Ferguson wherever the fight may go. Both fighters have some of the best conditioning in the sport, so we could get a fast-paced, five-round battle for the interim title. The shame of it is they may end up waiting for McGregor to fight Nate Diaz one more time before they get their shot at the legit belt.

The banter between the two fighters has been exceptional, culminating in this back-and-forth on FS1 where both fighters threw words like punches. They even went to the same college, though not at the same time. “He was a weirdo then, he’s even weirder now,” Lee says of Ferguson. Who do you think wins this war of words? [Warning: language]

Demetrious “Mighty Mouse” Johnson will attempt to set one of the most impressive records in UFC history Saturday night against #3 Ray Borg. A win on Saturday would give Johnson 11 straight title defenses, which would break the tie he is currently held in with the great Anderson Silva. This fight was initially scheduled to be the main event at UFC 215, but Borg fell ill and the fight was canceled.

With Ferguson and Lee already set as the main event for UFC 216, the promotion left it as such rather than move Johnson vs. Borg flyweight title bout into the headliner. It’s sort of emblematic of Johnson’s career. He’s going to successfully defend his title for a record 11th time, but it will be done as the co-main event and without much fanfare. Johnson takes it all in stride. He keeps collecting belts and checks, and Saturday he’ll break a record that will be difficult to beat.

Johnson isn’t even close to being done yet. Earlier in his career people thought he was somewhat boring because he often won by decision. He’s finished four of his last six fights, always outstrikes his opponents, and has some of the best wrestling in the game. There’s nothing boring about him at all. He’ll prove this yet again Saturday night.

Your UFC 216 Nickname Matchup of the Week

Our nickname battle of the week is the features Walt “Big Ticket” Harris against Mark “Hand of” Godbeer in a battle of two heavyweights. Harris is indeed the “Big Ticket” at 6-foot-5 and 250 lbs. He played college basketball at Jackson State and is also a former Golden Gloves champion. His UFC career began with three consecutive defeats, but Harris has won three of his last four and he’s done so with some big knockouts. Godbeer has a nice play on words with his nickname and he also has a future in craft beer if he chooses. He said the nickname came about after registering a bunch of knockouts. The Englishman is just 1-1 in the UFC but is coming off a spirited effort against Dan Spitz.

Neither fighter is ranked, but anytime the big boys take the cage the probability of fireworks goes up. These two will gladly stand in the pocket and trade power shots. I fully expect this fight to end by knockout.

Five other fighters you’ll want to watch at UFC 216.