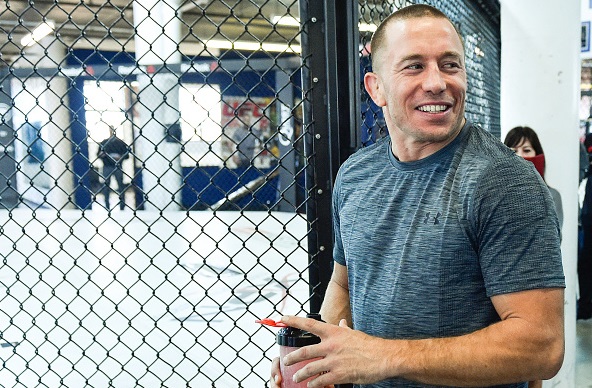 UFC 217 is one of the best cards of the year, and not just because we will see the return of Georges St-Pierre. GSP fights UFC middleweight champion Michael Bisping for the title in his return, one of three title bouts on the pay-per-view. Former teammates Cody Garbrandt and TJ Dillashaw will settle their bitter rivalry, with the winner taking home the bantamweight title. Joanna Jedrzejczyk looks to remain undefeated and retain her strawweight title again “Thug” Rose Namajunas.

Let’s break down what will be an amazing Saturday night of fights.

Lest We Forget: GSP Was The Man

Georges St-Pierre returns to the Octagon for the first time in almost four years to fight Michael Bisping for the UFC middleweight title. GSP left the sport on a 12-fight winning streak that spanned over six years. Lest we forget how amazing his reign was, here are some of the names he conquered during that championship stretch: Hughes, Penn, Condit, Nick Diaz, Shields, Hardy, Alves, Hendricks. He beat Hughes and Penn — both UFC Hall of Famers — twice each. He has two losses in his career and he avenged both.

It took what seemed like forever for GSP to make the decision to come back, but that just means the process did not lack any of the gravitas needed to return such a dangerous sport. It’s truly a remarkable story. Can a former champion come back at age 36 and claim a UFC title in his first fight in over four years? Bisping is getting on in age too, but he also used to fight two weight classes above GSP at light heavyweight. Physically, Bisping will be the biggest fighter GSP has ever faced.

The conventional wisdom says you’re not a true champion until you defend your title successfully. That take is hot garbage, but I understand the sentiment. It was something often applied to Bisping after his tremendous upset of Luke Rockhold at UFC 199. So Bisping went out and fought one of the most dangerous fighters in the world in former Olympian and MMA legend Dan Henderson at UFC 204. He retained his title with a unanimous decision win. Before that, he beat Anderson Silva.

Bisping, in the latter stages of his career, captured a title and has been putting Ls on the records of legends. He has the chance to do it again on Saturday night. But it will not be easy.

How did GSP win 12 fights in a row before stepping away from the UFC? He outstruck each of his opponents by a cumulative total of 921 to 355. Power-punching was never his thing, but he was an excellent boxer who worked behind the jab, landed accurate combinations, and then used those to set up his patented takedown. He also bested them in wrestling and had cardio that would make a marathon runner jealous. He took his opponents down 67 times in during that winning streak while his opponents were able to get him down a grand total of four times. Strikers, wrestlers, Jiu-Jitsu specialists — legends — it just didn’t matter. GSP was the best in the game. That’s what Bisping has to deal with.

But Bisping has the tools to deal with GSP’s game, at least in theory. Bisping has always had excellent conditioning, and while his ground game isn’t his best asset on the offensive side, he excels at thwarting takedowns and defending submission attempts. If a fighter does get Bisping to the canvas, he’s usually back to his feet quickly. His kickboxing game has always been excellent. He’s also riding a win streak having won five straight fights since losing to Rockhold in 2014. He avenged that loss and took Rockhold’s belt last year.

The Co-Main Event: Garbrandt vs. Dillashaw

They were once teammates at Team Alpha Male. Now they are enemies.

Cody Garbrandt remained with the team and won the bantamweight title from Dominick Cruz at the end of 2016. TJ Dillashaw left the team with all sorts of bad blood brewing and lost the title to Dominick Cruz at the beginning of 2016. There is no greater grudge match in MMA today, and it won’t be squashed even after someone’s hand is raised after the war. Garbrandt is 11-0 and made Cruz look nothing like the champ he was, battering and taunting him throughout five rounds at UFC 207. It’s hard to think of a comparison for Garbrandt. He has unusual power for a bantamweight, impeccable timing, and stellar defense. He has never been taken down in his UFC career.

Dillashaw defeated former champ Renan Barao when he was still unbeatable, and he holds two wins against him. But things change quickly in the fight game. Dillashaw lost the title to Cruz but came back to win his two other fights in 2016. He has excellent footwork, tremendous wrestling, and a much-improved striking game thanks to his hard work with Duane “Bang” Ludwig. Garbrandt is a -175 favorite and that seems right to me.

Here’s a little of their mutual rage:

Joanna Jedrzejczyk. Joanna Champion. Joanna Violence. All three names are acceptable for the UFC strawweight champion, who is indeed the most dominant female fighter since the erasure of Ronda Rousey from the scene. She’s probably the most dominant fighter in the entire UFC. 15-0 with five straight title defenses, Jedrzejczyk works at a feverish pace that makes her opponents wilt before her eyes. The combination of punishment and fatigue has been too much to endure for each fighter she’s faced.

In her last four fights, she has compiled striking totals of 225, 171, 176, and 220. It’s otherworldly. She routinely puts together four to six punch combos, usually after she has taken control of the cage and backed her opponent up against fence.

It’s difficult to imagine a fighter completely dominating a division the way Jedrzejczyk has. Her power, speed, chin, footwork, and defense are all off the charts. “Thug” Rose Namajunas makes for a game opponent, and likely has a better ground game than the champ, but a Jedrzejczyk loss is something that has to be seen to be believed. The mind’s eye can no longer conceive her being on the wrong end of a decision, or even a simple exchange during the fight. She’s a heavy favorite and a loss would be the most shocking thing in women’s MMA since Holly Holm took the belt from Rousey.

Five other fighters you’ll want to watch at UFC 216.