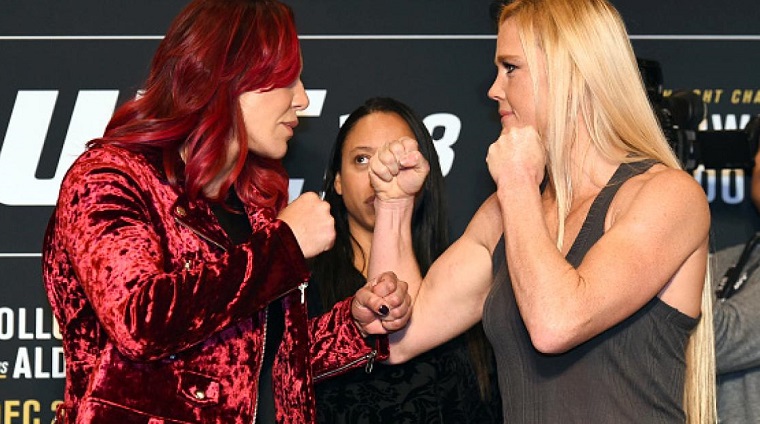 The UFC ends the year with a tremendous card for UFC 219 from Las Vegas as Cris Cyborg defends her UFC featherweight title against former UFC bantamweight champion Holly Holm.

In addition, two top contenders return to the Octagon after extended layoffs with Carlos “The Natural Born Killer” Condit back to face Neil Magny and Khabib “The Eagle” Nurmagomedov looking to run his record to 25-0 against devastating striker Edson Barboza. Top prospect Marc Diakese looks to shake off the first loss of his career as he battles Dan Hooker.

The Main Event: Cyborg vs. Holm

Cris Cyborg is the most devastating, ferocious female fighter in MMA history. This is not up for debate. There is no other female fighter that has physically dominated her opponents like Cyborg, and she made her dream of being a UFC champion come true when she knocked out Tonya Evinger at UFC 214. Cyborg lost her pro debut and hasn’t lost since, racking up 18 wins — 16 by way of knockout — in over a decade of competition.

But former UFC bantamweight champion Holly Holm knows how to slay a dragon. She was the first to defeat Ronda Rousey and did so with a head-kick knockout that is forever ingrained in MMA fans’ heads. Holm has a style that is conducive to beating Cyborg. She makes aggressive opponents pay by using her speed and footwork to create angles and then counters with strikes. Still, Cyborg’s pressure is otherworldly, and Holm could suffer the same fate as Cyborg’s other opponents and it wouldn’t shock anyone.

Either way, history will be made. Cyborg will be the first to defend the featherweight title with a win, and if Holm wins she becomes the first female in UFC history to win titles in multiple divisions.

The Co-Main Event: Nurmagomedov vs. Barboza

No. 2 Khabib Nurmagomedov meets No. 4 Edson Barboza in a fight that will determine the next opponent for interim champion Tony Ferguson, unless Conor McGregor is done counting his money and is ready to return to the UFC. In that case, Ferguson will meet McGregor to unify the title.

Either way, Nurmagomedov is a tough matchup for any fighter. His wrestling is suffocating and stifling, with the most recent example being his last fight against Michael Johnson. He simply tortured Johnson like a schoolyard bully. keeping Johnson on the ground while battering him and talking trash at the same time. He breaks people’s will inside the cage and has yet to lose at 24-0.

Barboza is a dynamic striker who has given fans some incredible finishes. He has to be careful with the kicks against the strong wrestling of Nurmagomeov. If “The Eagle” can catch any of those kicks, Barboza will most certainly end up on his back, the worst possible place to be against Nurmagomedov. This is a can’t-miss fight.

Carlos Condit has had a lengthy, storied career with 40 pro fights over 15 years. But after consecutive losses, Condit considered retiring from the sport. He has gone just 2-5 in his last five fights, with the most devastating loss coming against Robbie Lawler in their title fight at UFC 195. Condit outlanded Lawler by a considerable margin, but still found himself on the losing end of a split decision. He met Brazilian Jiu Jitsu king Demian Maia in his last fight and was quickly choked out, left to wonder if he should continue fighting.

Thankfully for the fans, Condit decided to keep going and he’ll meet No. 12 Neil Magny on the main card. This fight should be a crowd pleaser, as both men love to stand and bang. But for Condit, now 33, it marks a must-win moment. If he loses, he will surely drop out of the top 10 and be forced to climb the mountain again to get back into title contention.

Five other fighters you’ll want to watch at UFC 219.