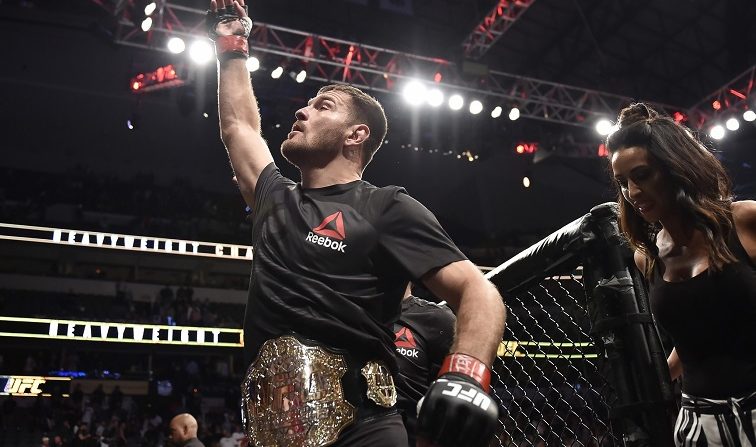 UFC 220 is the first pay-per-view event of the year and Boston will be treated to two title fights Saturday at the TD Garden before they get to watch Tom Brady and the Pats try to make it back to the Super Bowl on Sunday.

In the main event, UFC heavyweight champion Stipe Miocic looks to defend his title against the hard-hitting Francis Ngannou and Daniel Cormier battles Volkan Oedzemir for the light heavyweight crown. Let’s get to your UFC 220 preview!

The Main Event: Miocic vs. Ngannou

The UFC heavyweight title is the hardest to retain. Case in point: Stipe Miocic could set a UFC record this weekend by beating Francis Ngannou, which would mark his third straight title defense. The record is just two.

Miocic has five straight wins, all by knockout. He’s disposed of former champions during this run and his title reign, including former UFC heavyweight champs Junior dos Santos, Andrei Arlovski, and Fabricio Werdum. So forgive him if he feels a bit slighted by all the hype surrounding Ngannou, who has become the darling of fight fans everywhere due to his immense power.

Ngannou has a 10-fight win streak, most recently capped off by this insane knockout of Alistair Overeem:

Miocic might also feel slighted that oddsmakers have him as the underdog in this fight. Highlight reels have been rife with Ngannou knockouts, but both Miocic and Ngannou finish fights. Miocic has 14 knockouts in his 17 wins. Ngannou has finished all 11 of his opponents.

A few things work in Miocic’s favor. Ngannou has never been past the second round in any of his fights and currently ranks fourth all-time for shortest average fight time in UFC history. So if the fight makes it to round three, Ngannou will find himself in unfamiliar territory against a cardio machine who throws strikes at a frenetic pace. Miocic has gone five rounds twice, once against Junior dos Santos and the other against Mark Hunt. Another thing is that while all of Ngannou’s wins have been highlight reel-worthy, he has not faced the talent that Miocic has.

I think people are sleeping on the greatness of Miocic, which isn’t to say he can’t end up like the rest of Ngannou’s opponents — on his back staring at bright lights. Champions defend titles by derailing hype trains. Miocic can set a record Saturday night with a win, but an Ngnannou win would indeed usher in talk of him being the greatest power-puncher the UFC has ever seen. There’s always something innately special about heavyweight title fights and this one is no different. It is not to be missed.

The Co-Main Event: Cormier vs. Oezdemir

Daniel Cormier begins the second leg of his Jon Jones-less title reign as the heavy favorite in a championship bout against Volkan Oezdemir. Jones is the only fighter that has ever defeated him, but don’t deny that Cormier is the rightful title holder of the light heavyweight division. Cormier has beaten Anthony Johnson twice, Alexander Gustafsson, Anderson Silva, and Dan Henderson, and beat three big-name fighters when he was a heavyweight. Frank Mir and Josh Barnett are two former UFC heavyweight champs that Cormier beat and he also easily bested Roy Nelson. Cormier’s title is as legitimate as any other.

Next up is the rising star of “No Time,” who has posted two first-round knockouts in his last two bouts. But he’s had just three fights in the UFC and Cormier is an entirely different beast than any of the fighters he’s faced before. “No Time” might be just a bit before his time in this one, but the UFC light heavyweight division is sparse on contenders right now, at least ones that Cormier hasn’t already defeated.

Look for Cormier to overwhelm Oezdemir with his wrestling and finish this on the ground, but don’t be surprised if Cormier knocks out Oezdemir either.

No. 10 Thomas Almeida takes on No. 14 Rob Font in a battle of two flame-throwing bantamweights to kick off the pay-per-view card. Both fighters throw in volume — early and often — and both are coming off losses. The case can be made that a loss for either fighter could get them dropped from the rankings.

While every fight is important, a fight against another ranked opponent as you climb the contender ladder is especially important. A loss for either fighter means they will literally need to fight their way back into contention and that can be a lengthy process.

Still, from a fan’s perspective this is absolute gold. This could be a Rock ‘Em, Sock ‘Em Robots affair with each fighter looking for the knockout early. The lower weight classes don’t get as many finishes as the upper weight classes, but I suspect someone is going to sleep in this one. These two should set a great pace and tone for the rest of the pay-per-view card.

Five other fighters you’ll want to watch at UFC 220: