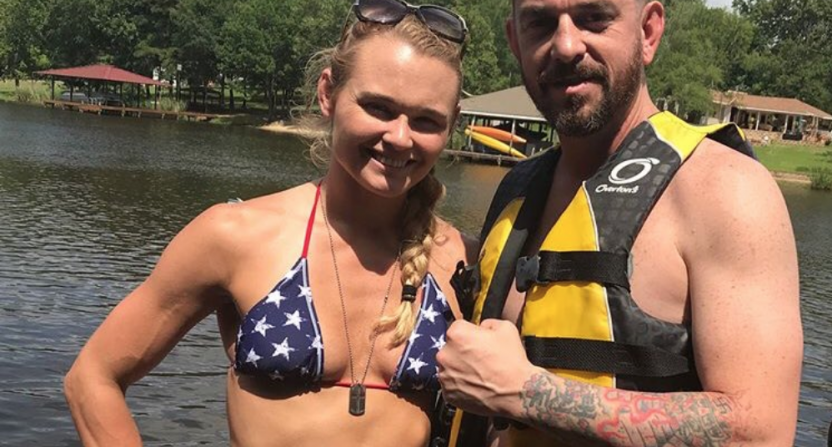 Last week, UFC fighter Andrea Lee found herself under fire when fans noticed, thanks to a photo she posted on Instagram, that her husband and coach Donny Aaron had a swastika tattooed on his left arm. She drew even more criticism hours later when she explained that she and her husband, who got the tattoo in prison, couldn’t possibly be racist because they had a black and an Asian roommate and that the people who were upset were “sensitive ass mofos.”

Well after a weekend of more careful consideration, Lee tweeted a more delicate statement on the matter, writing that she and Aaron aren’t Nazis and don’t hate anyone, while apologizing for her ham-handed initial response.

Please read my full apology, this is to everyone who was upset or offended by me and my initial response. I sincerely apologize, it wasn’t thought out when I sent it, I deleted it immediately after I sent it when I was more rational and clear minded. 🙏 forgive me pic.twitter.com/9td65xNAmo

On Tuesday, Aaron chimed in with his own apology, in which he explained that his tattoos “tell my history which include a dark time when I was in prison.” However, he wrote, “they do not accurately represent who I am today as a person, my personal belief system and the respect I have for people of all races and religion.”

Let’s back up a little bit, for people who have not followed this story since it first broke last week. The drama began on Friday with this photo:

Andrea ‘KGB’ Lee’s husband has a swastika tattooed on his forearm. pic.twitter.com/NTntH0paRr

As you can see, Aaron has a swastika on his forearm, just next to the inside of his elbow. And given that the swastika was the official symbol of Naziism, the one that hung at concentration camps where 11 million civilians were systematically murdered, it’s easy to figure many people were quite alarmed to see it there.

Soon, it turned out Aaron had not only a swastika on his left arm but also an SS insignia on his right one.

Lee, however, did not see what the fuss was all about.

It's just a Nazi tattoo. You "sensitive ass mofos." pic.twitter.com/RbQ6A6BHi6

So basically, not only did Lee marry someone with multiple hate symbols tattooed on his body, she also failed to see why some people might be upset by that.

You’d think maybe we as a society would be be in full, unflinching agreement by now that swastikas are bad, but it seems we’re not there yet. Maybe one day.