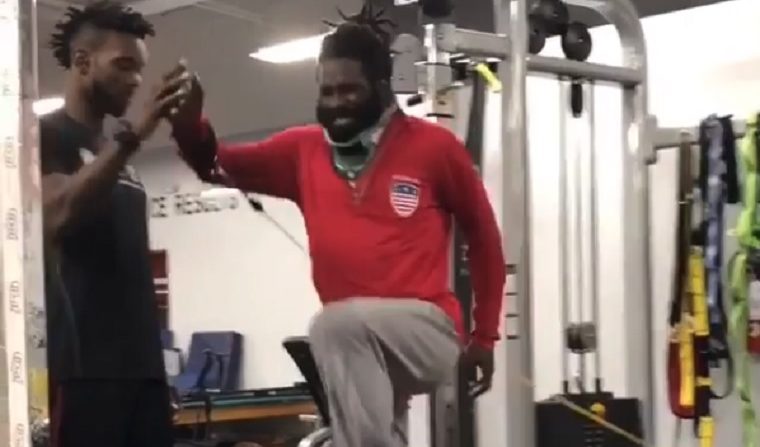 This week: Another former NFLer wrecking people in the cage, Conor and Floyd trade shots on social media, UFC fighter obliges fan and sends ‘nudes,’ and much more!

Roxanne “The Happy Warrior” Modafferi is a pioneer in women’s mixed martial arts and, by all accounts, one of the nicest people to ever do battle in a cage. So when one of her many fans put in a request to “Send nudes,” Roxy got to work and put something together for him.

Here ya go, buddy – some nudes. Hope I could help. XD pic.twitter.com/kaOKNhPbHK

That Roxy, always there to help out the fans in need.

Will we ever be done with the saga of Floyd Mayweather and Conor McGregor? It’s worth some laughs, if nothing else. They took to their social media accounts to digitally jab at each other yet again.

I already fucked you up in 2017 now they about to fuck you up in 2018. You’re about to start your new year off with a bang ??⛏?⚰️ pic.twitter.com/upaRfLbgvJ

I am the cartel.

Apparently — and to no surprise — the news items about Mayweather signing a UFC deal were simply rumors. But McGregor has plenty of fights waiting for him in the UFC and Floyd has plenty of money to count and spend.

Austen Lane was a fifth-round pick of the Jacksonville Jaguars in 2010 and a former All-American at Murray State. He played three years with the Jags, then had cups of coffee with the Chiefs, Lions, and finally the Bears in 2014 before calling it a career. He transitioned into MMA and he has been unstoppable.

FloCombat reports Lane is set to headline Warfare MMA 18 against Ben Rowland on March 10. He won all five of his amateur fights before turning pro in 2017. He then proceeded to score quick first-round knockouts in his first two pro fights. Now 30, Lane has some time left, especially as a heavyweight, to make his mark in the sport and fight for bigger promotions.

There have been many former pro football players that have gone on to success in MMA. Matt Mitrione, Brendan Schaub, and the legendary Herschel Walker have all succeeded at MMA at the highest level, and it looks like Lane is on track to join them.

Former Bellator world champion Daniel Straus was in a motorcycle accident that left him hospitalized and temporarily paralyzed. He’s attacking recovery with the same vigor he attacked opponents with in the cage. Known for his relentlessness and pressure, it’s not too surprising that Straus is dominating his latest opponent.

2 days after the doc tells you, you “might” not walk again ?? #FuckYouBuddy #TheShowJustStarted #Blessed (Thank you everyone for your support, prayers, and love) #TeamStraus #2018

Don’t be surprised to see Straus fight again. He’s incredibly good at it, no matter the opponent.

Big John McCarthy is probably the most well-known referee in MMA. But he’s putting refereeing on the back burner after taking a position with Bellator as a commentator.

“With the addition of ‘Big’ John to our broadcast team, we have put together the premier group of MMA commentators ahead of our Jan. 20 debut on the Paramount Network,” said Bellator President Scott Coker. “With John and Chael providing analysis, you’re getting two people who have spent more time in the cage than they have spent with a headset on, and that will translate to a positive viewing experience for Bellator fans.”

Spike TV becomes the Paramount Network on January 18, and Bellator 192 will be the first event on the newly named network. That event features a welterweight title fight between Douglas Lima and Rory MacDonald, as well as the first heavyweight tournament fight featuring Chael Sonnen and Rampage Jackson. Sonnen has also agreed to continue his duties as commentator with Bellator.

Your MMA/WWE Story of the Week

Ronda Rousey’s friend and former MMA fighter Shayna Baszler is set to compete in WWE’s NXT division after doing well in the recent Mae Young tournament. Rumors that Rousey would be joining WWE have been floating around since she quit competing in the UFC, and they resurfaced this week after TMZ found Rousey and her agent dining with Triple H in L.A. The scenario obviously piqued a lot of interest with wrestling fans, and with the WWE’s recent announcement of an all-female Royal Rumble, fans are certain that Rousey will be there to make some noise.

Rousey would be fantastic in the WWE, and here’s hoping it comes to fruition. Like most stars who fall from the top, Rousey was treated to a tremendous amount of flak from MMA fans after her devastating back-to-back losses to Holly Holm and Amanda Nunes. I guess winning your first 12 fights, defending your title seven times, and forever changing women’s mixed martial arts for the better just isn’t enough for some people. When fighters point to the ugliness of MMA fandom, a look at how Rousey was treated is a prime example.

She may no longer be the UFC strawweight champion — Thug Rose Namajunas saw to that — but Joanna Jedrzejczyk is still making history. According to The Score, she was the first female UFC fighter to carry the Olympic torch, one of several athletes who got to do so in representing Poland.

Jedrzejczyk got to carry the flame in South Korea, where the Winter Olympics will take place beginning Feb. 8. How cool is that?

Vitor “The Phenom” Belfort is calling it a career after his fight against Uriah Hall Sunday night in St. Louis. His career began at the age of just 19 back in 1996. Belfort is now 40, and he has nothing left to prove in the game. He’s simply done it all. He fought for the UFC middleweight title twice, and he was the former UFC light heavyweight champion. His resume is beyond impressive. He fought huge names like Jon Jones, Randy Couture, Chuck Liddell, Tito Ortiz, Dan Henderson, Wanderlei Silva, and Anderson Silva — just to name a few.

It was a Hall of Fame career littered with bouts against other Hall of Famers. Belfort fights a very dangerous opponent on Sunday night in dynamic knockout artist Uriah Hall. Make sure you watch “The Phenom” one last time.

The UFC returns with an event Sunday in St. Louis, and it’s there we find our nickname battle for this week. We’ve selected Kamaru “Nigerian Nightmare” Usman against Emil “Valhalla” Meek. This is a battle of warriors that sounds like it’s something out of the Smite videogame, a battle between two gods.

Fighting out of Boca Raton, Usman is from Auchi, Nigeria — hence the “Nigerian Nightmare” name. The older readers will remember Kansas City Chiefs running back Christian Okoye, who was also known as the “Nigerian Nightmare.” He flattened defensive backs and linebackers; Usman flattens his opponents. He’s ranked 10th in the UFC welterweight division and coming off a vicious knockout win over Sergio Moraes. It’s cliche, but Usman is indeed a better fighter each time he steps in the cage.

Meek is all about the Viking culture. His favorite moves are what he calls the “Viking Armrip,” and the “Valhalla Kick.” He’s coming off an impressive win over Jordan Mein, and this should be a fight where someone goes to sleep. Watch it Sunday night on FS1.