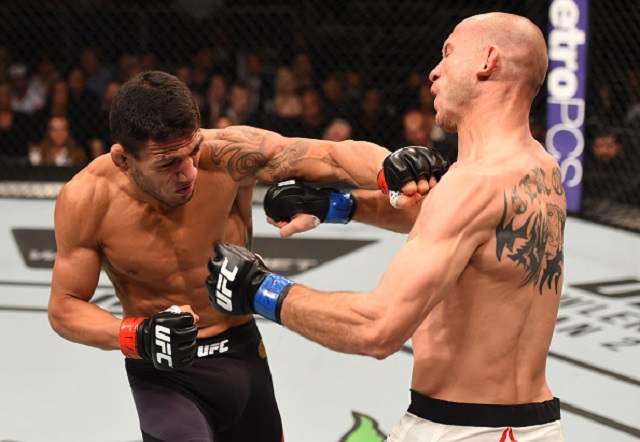 The UFC will be handing out its first penalties since the installment of the Athlete Outfitting policy.

MMAjunkie reports that three athletes who competed at December’s UFC on FOX 17 event in Orlando will receive reductions on their payments for violating the policy with intent. Another 12 athletes will be receiving warning letters for issues stemming from the first six months of the policy’s implementation.

UFC Senior Vice President of Global Consumer Products Tracey Bleczinski (who formerly held a similar position with the NFL) told MMAjunkie’s John Morgan that the details of the penalties, including the athletes involved, would not be disclosed.

“A warning is issued when an athlete is non-compliant but agrees and takes steps to correct the infraction. There is ample opportunity for an athlete to correct an infraction. The equipment department, as well as our athlete relations teams, are onsite at the event throughout event week, helping the athletes to be compliant. We know that there’s very much an educational process around this, and so that’s why they’re just receiving a warning letter. A payment reduction is enacted when an athlete knowingly and seriously violates the policy after receiving an opportunity to correct it.”

There are a number of things that could have caused the infractions. Specifically, the failure to use the Reebok Fight Kit during fight week, the usage of unapproved flags or banners, along with any unapproved accessories, or competing brands or sponsors.

The policy was distributed to fighters in December 2014 and participants also took classes to further educate fighters on the policy.

Bleczinski also told MMAjunkie that the UFC does everything that they can to prevent violations of the Athlete Outfitting Policy. This makes sense, because clearly they would like to keep sponsors happy. Also, athletes receive royalties for any merchandise sold that bears their likeness.

The fact that this is the first time that punishments have had to be handed out seems pretty good for the UFC, although they would obviously prefer it never happens. It seems almost weekly an NFL player is being fined for some sort of uniform infraction. The NBA also occasionally cracks down on players for such issues.