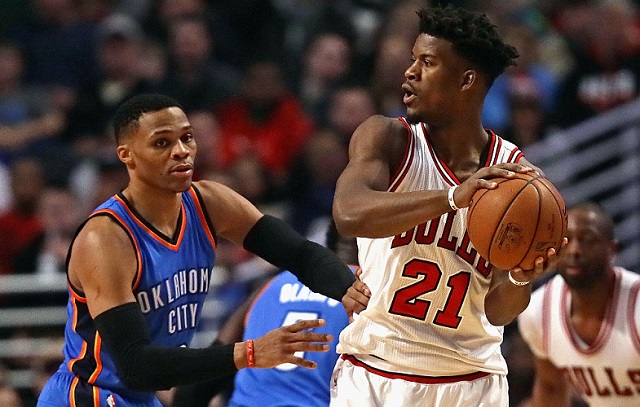 February is a month truncated on both the actual calendar and the NBA calendar as well, with the All-Star break taking a large chunk out of the month’s 28 days. But that doesn’t mean there aren’t some intriguing games leading up to the Feb. 23 trade deadline and beyond.

Here are the 10 big NBA games to watch in the month of February. And no, the NBA All-Star Game is not included.

Despite some tumultuous times for these Bulls, most notably Rajon Rondo’s inflammatory Instagram post last week and the fallout from that, they’re still the seventh seed in the East after an 8-7 January. This Chicago team gets the early ESPN spotlight against the Thunder, who are still trying to figure out how to alter its rotation after Enes Kanter broke his forearm punching a chair in Thursday’s game against Dallas.

Come for the interesting storylines surrounding these teams, but stay for the offensive brilliance of Russell Westbrook and Jimmy Butler.

This will be Dwight Howard’s return from Houston after being partially blamed for the Rockets’ disappointing season last year, contributing to their toxic chemistry. Let’s just say Houston isn’t really missing Howard very much.

After bringing in coach of the year favorite Mike D’Antoni and surrounding an unleashed James Harden with shooters like Eric Gordon and Ryan Anderson, Houston is thriving at 36-16 without Howard.

For his hometown Hawks, Howard is putting up the best field goal percentage of his career and his best per-game rebounding numbers since he led the league in that department five years ago.

Just last Saturday, the Warriors beat the Clippers by an astounding 46 points, 144-98, highlighted by 43 points from Steph Curry and punctuated with his halfcourt heave at the halftime buzzer.

Los Angeles has lost four of five, continuing without the injured Chris Paul as rumors swirl that the team is interested in acquiring Carmelo Anthony from New York. More on that shortly.

This setup does not bode well for the Knicks. Give LeBron James a nationally televised game at Madison Square Garden after his way too public spat with Charles Barkley, and there’s way too much incentive for LeBron to go off.

New York, of course, is a mess. It’s no secret that Phil Jackson wants Carmelo Anthony traded, but Anthony ultimately has a no-trade clause, so he has the upper hand. Also watch out for former Knick J.R. Smith, who will relish his return to the Garden on a national stage.

If you’re bored of Fox’s 18 hours of Super Bowl pregame coverage, Doc Rivers’ annual trip back to Boston will be an interesting diversion. The Celtics have won four in a row and seven of 10 and are currently holding the second seed in the East.

This will also give proper recognition to All-Star point guard Isaiah Thomas, who averaged 32.9 points per game in the month of January on 49.7 percent shooting and 43.2 percent from three.

Pretty quietly, the Washington Wizards are one of the league’s hottest teams. They’ve won five in a row, 11 of 13 and have the East’s best record since Christmas. After a 7-8 January, the Cavs will face a team that’s won 15 straight games at the Verizon Center.

The Warriors only have seven losses this season, but two of them happen to be to the Grizzlies.

With Mike Conley out of the lineup on Dec. 10, Memphis still pounded Golden State by 21. Then on Jan. 6, the Grizz came back from a 24-point deficit in the second half to win in overtime. This may not be a nationally televised contest (yet), but Golden State probably has this one circled on their calendars.

I wrote about the struggling Blazers towards the end of December, and things haven’t gotten much better since. They’re still in the lottery, a half game behind Denver for the eighth seed in the west, and still have a bottom five defense.

This game will mark 10 days before the trade deadline, and what Portland does to either try to get a rim-protecting big man or free up some salary space by trading one of its rotation players could determine the Blazers’ ultimate playoff fate this season.

If you like international stars, this is the game for you. Milwaukee may be a game out of the playoffs right now, but Giannis Antetokounmpo is putting up numbers that will have him in the top five to 10 range in the MVP rankings.

The Greek Freak is putting up over 23 points, nearly nine rebounds and 5.5 assists per game on 52.7 percent shooting from the field. He’s eighth in total win shares and ninth in player efficiency rating. His opponent on this night will be the Jazz, who lead the league in scoring defense and are second in points allowed per 100 possessions.

Though he barely missed the All-Star team, Utah center Rudy Gobert should not only be in the running to win defensive player of the year, but may achieve efficiency history this season. Gobert leads eligible players in defensive efficiency (and defensive win shares) and is third in offensive efficiency, per Basketball-Reference. The Gobert Double is something stat nerds will watch carefully over the second half of the year.

Both these teams will be comfortably in the playoffs, but seeding is incredibly important for these two teams.

For the Spurs, getting that second seed over the Rockets will be important if those two clubs play each other in the second round. L.A. will have a tough time beating out either San Antonio or Houston for a top three seed and could have trouble holding off Utah for the fourth seed. So the Clippers would not only have to play Golden State in the second round if it stays fourth or fifth out west, but may have to go on the road in round one as well. Not ideal for Doc Rivers’ bunch.