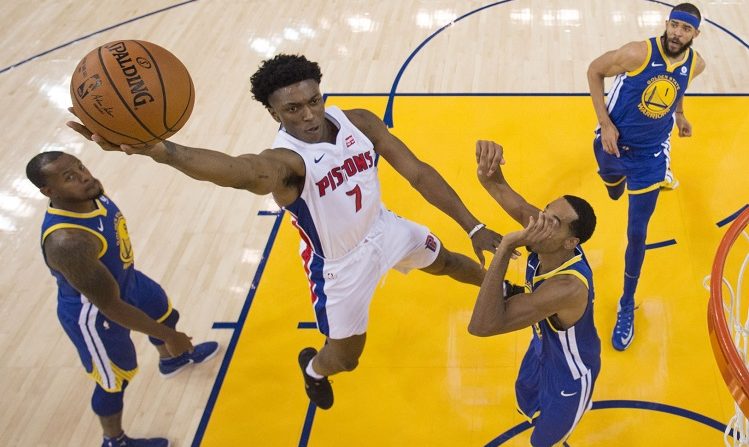 Most NBA fans associate the month of December with the incredible slate of Christmas Day games the league puts on, but it’s definitely more than just that. There are also more than three weeks of important games before we hit Dec. 25, pushing the regular season from its quarter-mark past the 30-game threshold as we approach midseason.

Six of our 10 games to watch this month come before Christmas, including a reprise of the most impressive performance so far this season, a feature match-up including the league’s biggest surprise to date and the Oklahoma City Thunder Reunion Tour.

The Bucks and Celtics split their first two regular season meetings, one of four losses Boston has this season. Even with the league’s best defense, the Celtics haven’t figured out a way to contain Giannis Antetokoumnpo, who scored 37 and 28 points, respectively in the two prior matchups this season.

Milwaukee is off to a slow 10-9 start and are mediocre in every major offensive and defensive category. Though they don’t allow many 3-point attempts, teams are shooting 39.7 percent from three against the Bucks this season, the highest percentage allowed in the league. For Milwaukee to improve, that number needs to get better.

The last time these two teams met, Joel Embiid had a game for the ages. The Process put up 46 points, 15 rebounds, seven assists and seven blocks in a 115-109 win. What will Embiid do for the sequel? I know I can’t wait to find out, but one downside could be a potential trend of Hack-A-Ben after Ben Simmons attempted a league-record 24 free throws (hitting 12) in the fourth quarter Wednesday’s win over Washington.

Meanwhile on Wednesday, the Lakers took Golden State to overtime, led by Brandon Ingram’s 32 points and Lonzo Ball’s 15 points and 10 rebounds. Los Angeles is only 8-13, losing by an average of 2.1 points per game with the fastest pace in the league. That pace is the reason behind their terrible offensive efficiency, 28th in points per 100 possessions, but they’re seventh in that category on defense. We’ll soon see if L.A. is looking for revenge from the Embiid game.

The Pistons have been by far the biggest surprise in the league so far this season. While other surprises like Orlando, Memphis and New York have faded, Detroit has endured thanks to a huge first quarter of the year from Andre Drummond. Drummond was extremely available in trade talks over the last year or so, shooting 54.8 percent from the field and averaging over 14 points and a league-leading 15.2 rebounds per game. Tobias Harris, Reggie Jackson and Avery Bradley have also been excellent for the Pistons, who are eighth in offensive efficiency and 10th on the defensive side.

The Warriors are “only” 16-6 to begin the season, as they’ve had some nick and bruises along the way. With Stephen Curry (hand) and Kevin Durant (ankle) out on Monday, Golden State fell to the lowly Sacramento Kings. Look for more losses than their usual dominance this season as Steve Kerr and Co. look to prioritize rest and maintenance during the regular season, as they pursue their third title in four years.

Paul George returns to Indiana for the first time on the first of two stops in the Oklahoma City Thunder Reunion Tour. Oklahoma City is 8-12, just a half game ahead of the lowly Lakers, but just two games behind Utah for the eighth seed in the West. Though the Thunder offense is struggling, which we’ll get to, George is shooting 40 percent from three and averaging 20.5 points and nearly six rebounds per game.

In a surprising twist, the Pacers are the better of these two teams so far this season. Indiana is off to a 12-10 start led by an offense that’s sixth in offensive efficiency and seventh in points per game. The two players acquired from OKC in the George trade, Victor Oladipo and Domantas Sabonis, are off to great starts as well. Oladipo is averaging nearly 23 points and five rebounds per game on 47 percent shooting and 42.8 percent shooting from three and Sabonis is averaging nearly 13 points and nine boards per game coming off the bench. Indiana is also getting great offense from Myles Turner, Darren Collison and Bojan Bogdanovic, as the Pacers welcome PG13 back to Indy.

After seven seasons with the Knicks, the Thunder completed their summer coup by acquiring Carmelo Anthony, who makes his first return to Madison Square Garden since the trade. Melo isn’t shooting as well as George, but 19.7 points on 36.8 percent from three isn’t bad. The problem with the Thunder offense — 21st in efficiency, 22nd in points per game — is that the ball isn’t moving. A whopping 12.6 percent of OKC’s possessions are isolations, the most in the league by more than a percentage point, per NBA.com.

The Knicks are holding their own so far at 11-10, led by Kristaps Porzingis, Tim Hardaway Jr. and Enes Kanter (part of the haul from the Thunder), but they’ve played just seven of their 21 games thus far at home.

These are two teams still doing well in the Northwest Division while trying to figure themselves out. While excelling on offense, Tom Thibodeau’s Wolves are 25th in defensive efficiency despite having strong defensive anchors in Jimmy Butler and Karl-Anthony Towns. An improvement is needed if Minnesota wants to be anything more than an east first round out in the playoffs.

Denver is dealing with the loss of huge offseason signing Paul Millsap, who’s out until at least mid-to-late February with a torn ligament in his left wrist. Until his return, the Nuggets seem to be starting different players based on match-ups, including veterans Kenneth Faried and Will Barton.

As the two teams meet for the first time since last June’s NBA Finals, the Cavs look a little… different. Kyrie Irving is in Boston, Isaiah Thomas is hurt, Derrick Rose is questioning his basketball future, Tristan Thompson has been injured the last month, Iman Shumpert will be out the next six-to-eight weeks and Dwyane Wade is coming off the bench.

Yet Cleveland is still third in the East at 15-7, getting LeBron James at his usual best and 14 double-doubles from Kevin Love, tied for the third-highest total in the NBA. The Cavs may not currently be the favorites in the Eastern Conference, but they’re slowly improving and getting into position for another late season run.

ABC continues its season debut triple-header with a grudge match from last season’s playoffs when the Celtics vanquished the Wizards in a seven-game classic. Kyrie Irving has been sensational for Boston, as he’s in the top 10 in both PER and Win Shares and is on pace for a top-five MVP finish.

Washington leads an abysmal Southeast Division at 11-10 and is expected to get John Wall back from a left knee injury in about a week. What the Wizards should be heartened by is the sustained excellence from Bradley Beal after a breakout campaign last year — he’s averaging over 23 points per game — and the continued development of Kelly Oubre. If you aren’t worn out by the intensity of Cavs-Warriors, you’ll enjoy this game.

And if you still have energy to watch yet another playoff rematch, buckle up for the newest installment of Harden vs. Westbrook, but this time there are new players added to the mix. Chris Paul will try to lock down Westbrook defensively, and Anthony and George enter the fray.

Will the Thunder be past their early season struggles at this point? Will Anthony be shouldering more criticism and blame by Christmas? Or will OKC be able to bounce back and join its expected place among the West’s elite?

The first time we saw an offense-defense clash, the Celtics defense shut down and frustrated the Warriors in a gigantic statement win. Houston is second in points per game and per 100 possessions, and marks Boston’s next enormous task. Can the Celtics hold Harden and the Rockets down like they did Golden State? TNT ends its calendar year off right with this inter-conference battle of contenders.