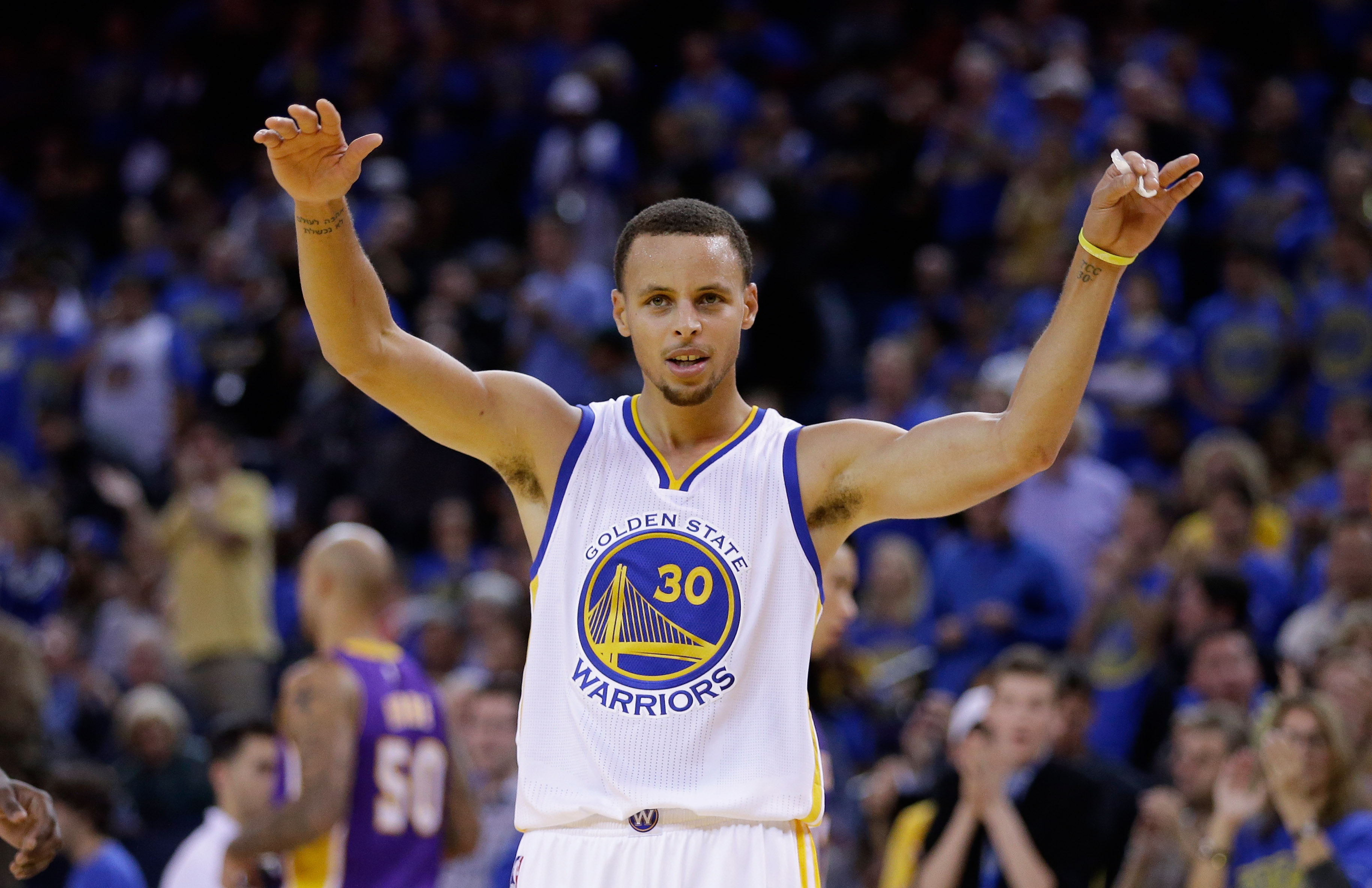 This NBA season has been defined by one stat: zero losses for the Golden State Warriors.

The defending champions extended their regular season win streak to 27 games (dating back to last season) in Indiana Tuesday night and are now off to a NBA record-best start of 23-0. But that tells only part of the Warriors hot start: here are 14 stats–most of which are rather, shall-we-say, unique–that help explain just how crazy their season has been.

The Warriors aren’t just winning – they’re crushing teams. They have outscored their opponents by a combined 335 points this year and are on pace for a season-long point differential of plus 1,194. The best season ever was the 1971-72 Lakers, who finished +1,007 vs. their opponents to a 69-13 record.

In per-game terms, the Warriors are winning the average contest by 14.6 points, or about two points per game better than that record Lakers season. Only two teams in the last decade have even gotten to a point differential of +10 per game: the 2007-08 Celtics (10.3) and last year’s Warriors (10.1). The Warriors’ figure will drop if they ever lose a game, of course. They’ll definitely lose a game. Right?

Let’s say the Warriors want to rest their key guys and get ready for the playoffs now. Golden State has actually built up such a cushion in their first six weeks that they could lose a majority of their games the rest of the way (by going 29-30) and still finish with the No. 2 seed (behind the Spurs) if the other Western Conference teams continue their current pace.

Imagine a more extreme scenario: the Warriors not winning another game this season. That won’t happen! But if it did, they’d still have more wins than the Lakers, Knicks, 76ers of Timberwolves had all of last season. This season, the Pelicans, Lakers and 76ers are all on pace to finish with fewer than the Warriors’ current 23-win total, and the Nets are on track to finish with exactly 23 wins. So the Warriors could take the rest of the year off (three-fourths of the season) and still only be in line to finished tied for the 4th-worst record in the league.

For the season, Stephen Curry already has more than a 100-point cushion on the NBA’s No. 2 scorer. But Curry has been so dominant that he’d be a top 10 scorer even if he hadn’t taken a single two-point shot all year. Here are the points rankings in that scenario:

Stephen Curry is running away with the three-point shooting race and is on pace to drain 424 threes, obliterating his own record for 3s (286), which he set just last season. But Curry is so far ahead of the pack from beyond the arc that he doesn’t even need to play home games to keep his three-point shooting title. Consider these rankings for most 3s made this season: 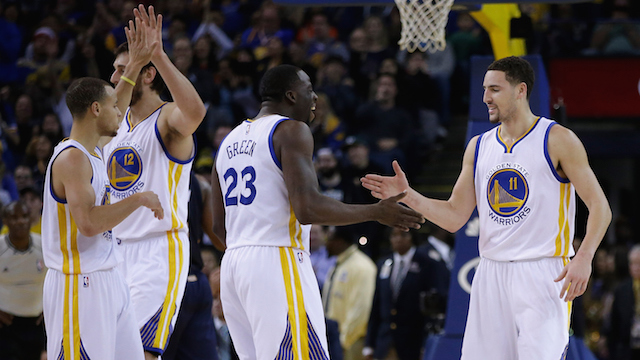 The Warriors don’t need Curry to hit as many three-pointers at home because they almost never lose at Oracle Arena. The Warriors are 49-2 in regular season home games since the start of last season. To give you an idea for how good that is, all but two other teams (the Spurs and Cavaliers) have that many home losses just this season.

Only a handful of teams have gone even one season with two home losses, and just one lasted an entire campaign with a single loss: the 1985-86 Celtics, at the old Boston Garden during the peak Larry Bird-Kevin McHale-Robert Parish era. That team lost three home games over a two-year span (also a record), and the Warriors have a shot, at least, to tie or even beat those marks this year.

The impressive stretch means run-down Oracle Arena – so old the Warriors can’t wait to ditch it for a brand-new cash-cow across the Bay in San Francisco – is now the most expensive ticket in the NBA on the secondary market.

There’s not a single Warriors home game where you can get a ticket for less than $100 on StubHub until the Mavericks come to town on Jan. 27. That’s crazy – across the NBA, you can get into just about any game for under $100 (outside of when cities host Kobe Bryant’s farewell tour, or the Warriors). About half the games next week have tickets for less than 30 bucks. The most expensive get-in price for an upcoming NBA game? More than $250 for on StubHub to watch a NBA Finals rematch with the Cavs at Oracle on Christmas Day.

The team now owns the Bay Area. Since the last Warriors regular season loss on April 7: 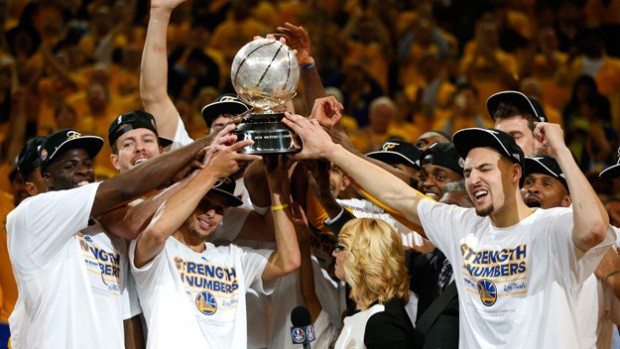 What about since their last overall loss, Game 3 of the NBA Finals, on June 9? Consider that at that point:

*The U.S. Supreme Court had yet to rule to allow same-sex marriages nationwide

That stuff seem like a long time ago? Yeah, the Warriors last loss came before all that.

It seems like every game the Dubs have a streak where they pour in 20 points in the time it takes you to check your inbox. The Warriors are by far the best-shooting team overall, and the most accurate at shooting threes, and here is how far behind everyone else is in the points standings:

A team right in the middle of the pack has 2,138 points – more than 500 fewer than the Warriors. After six weeks.

The biggest reason for the Warriors onslaught of points is that they have made nearly 90 more three-pointers than any other team, but the Splash Brothers – Curry and Thompson – have out-shot about two-thirds of the teams in the NBA. If the Splash Brothers were a team, their 187 threes on the year would rank 12th in the NBA.

A stat you may have seen floating around – but is worth repeating – is that Curry himself has singlehandedly made more threes than four teams: the Grizzlies, Heat, Timberwolves and Nets.

The Golden State moniker has always bugged me – putting aside the disrespect for the city of Oakland and the Bay Area fanbase, how can the Warriors claim to represent a state that has three other NBA teams? As far as I can tell, the only other pro sports teams that take on this mantle are the Texas Rangers (who took credit for the whole Lone Star State after the Houston Astros were already in the MLB) and the Florida Panthers (who took it upon themselves to represent the Sunshine State a year after the Tampa Bay Lightning joined the NHL), making no mention of the New England Patriots, who claim to represent an entire region of the country.

But now, the Warriors really do own the Golden State. The Warriors have as many wins (23) as the three other Golden State teams combined (the Lakers, Clippers and Kings are a collective 23-42).

The Warriors have a better shot than you might think to match or beat the 1995-96 Bulls’ record of 72 wins. Golden State needs to go 49-10 over its last 62 games to match the Bulls’ record. Last year, the Warriors finished 46-13 over that same span. In other words, they just need to be three games better than last year. And the 95-96 Bulls finished that same span by going 54-8, so the Warriors have (a little) room for error compared to the record-holders. If they keep playing like this, though, they won’t need it.

Mike Rosenberg is a former reporter for the San Jose Mercury News and is now a freelance reporter based in Seattle, and has covered sports business and other news for more than eight years. He's most interested in what's happening the 99.9% of the time your favorite team is not playing.