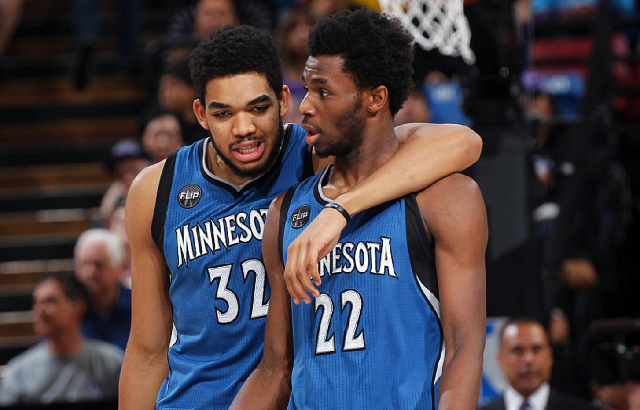 A new NBA season has arrived! Time to say goodbye to loved ones. See you all in July. And, sure, we all know what this year’s Finals will look like. So what? There’s still plenty to keep us entertained until then.

17. A full season of Giannis Antetokounmpo at point guard

Antetokounmpo, otherwise known as the Greek Freak, is 6-foot-11. He’s got Go-Go Gadget arms (technically, his wingspan is seven feet and three inches). He’s just 21 years old and routinely makes plays like this:

Milwaukee Bucks head coach Jason Kidd moved Antetokounmpo over to point guard after last year’s All-Star Game. Antetokounmpo responded by averaging 18.8 points, 7.2 assists, 8.6 rebounds, 1.4 steals and 1.9 blocks while shooting 51 percent from the field. So yeah, it’s safe to say he was comfortable with the position switch.

Now he’s had an entire offseason to prepare. The Bucks might stink (fine, they will stink), but Antetokounmpo and his continuing ascension will make them a League Pass must watch.

Meet Boris Diaw. Boris, along with being a rotund small forward with a delightful skill set, is an avid coffee drinker. He has an espresso machine that he brings everywhere, from the locker room…

Long drive from san antonio to utah, But a lot of good parks along the way, here is white sand national monument. I keep you posted for the other ones. #roadtrip #3daytrip #whatelse A photo posted by Borisdiaw (@diawboris) on Sep 4, 2016 at 7:43pm PDT

And now he plays for the Jazz, who play in Utah, which is the headquarters of the The Church of Jesus Christ of Latter-day Saints, which prohibits the consuming of warm drinks, which, as outlined by Ben Cohen in the Wall Street Journal last week, makes this a strange marriage, but also one that could lead to lots of laughs.

More importantly, many have the Jazz pegged as the breakout team of the season, and for good reason: They surrendered just 101.6 points per 100 possessions last season and traded for George Hill, one of the league’s best defensive point guards, in the offseason.

The additions of Hill, Diaw and Joe Johnson give the Jazz more depth and talent. And they still have Rudy Gobert, Gordon Hayward, Derrick Favors, and don’t forget about a now-healthy Dante Exum. Or the underrated Rodney Hood.

Yeah, the Jazz are going to be real good this year.

Before taking the Rockets job in 2011, McHale emerged as one of the top basketball broadcasters in the business. He’s old school and has a great eye for the nuances of the game, but is also fluent in and a fan of advanced numbers. (He certainly couldn’t have worked in Houston if he wasn’t.) He’s also got a great sense of humor. McHale, after being fired by the Rockets last season, returns to TNT and NBA TV this year. His presence will make us all smarter basketball fans.

14. The Celtics have a Death Lineup of their own

This was broken down in detail by Michael Pina over at Bleacher Report, but is worth mentioning here. The addition of Al Horford now allows the Celtics to put a super-athletic, fun, quick and switch-capable lineup onto the floor: Horford, Isaiah Thomas, Avery Bradley, Marcus Smart and Jae Crowder.

A lineup with those four and Jared Sullinger played just 66 minutes last season and essentially played opponents to an even mark, per NBA.com. But Horford is twice the player Sullinger is. Coupled with improvements from Smart and you have a group that will be a ton of fun to watch and likely catapult the Celtics up to the No. 2 seed in the Eastern Conference.

13. Boogie Cousins has a real coach… and if that doesn’t work, he’ll be traded

Dave Joerger is a respected NBA coach with a proven track record. George Karl was that once upon a time, but had already checked out by the time he arrived in Sacramento two years ago.

Joerger is similar to Mike Malone, the last (and only) Kings head coach that Cousins gelled with. He’s a young basketball lifer whose players like him and who knows his basketball. Bringing him in was a solid move for the Kings (the lone one they made this offseason), and could, perhaps, lead to another leap from Cousins.

A man the size of Boogie Cousins should not be able to do something this athletic. #BBN #Kings pic.twitter.com/0PSvzSgS54

Or, this being the Kings, the whole thing blows up and Cousins ends up demanding a trade. He has two years left on his contract and so if the Kings decide to pull the plug on that relationship this season would be the time to do so. There are a number of teams (Boston, Phoenix and Denver, for example) who would be thrilled to send Sacramento a package of assets and/or young players in exchange for a stud.

Either way, this could be the make-or-break season for Cousins in Sacramento. It should be fun to watch.

The Process, as he’s recently dubbed himself, finally returns to the court. And wow, does he look good! He’s running, dunking, leaping over opponents, draining threes and even bringing the ball up the floor.

.@JoelEmbiid is filling in for Ben Simmons quite nicely.https://t.co/8Jv5H7mQ9F

in other news Andre Drummond is 7 feet tall. https://t.co/Ye5V5wsJvS

There’s hope again in Philly, mostly thanks to Embiid, who might actually bring more to the game off the floor…

If he wins, he's gonna deport you….. https://t.co/yswmQrNLzn

And then there’s his constant shout-outs to Sam Hinkie, his former boss:

‘Tis the season of Embiid.

There’s no “when Karl-Anthony Towns develops, he’s going to be a top-10 player.” He’s already there. He’s 7-foot-1, with an array of post moves that would Kevin McHale proud, but can also stretch the floor. Now he gets to play for Tom Thibodeau, maybe the best defensive mind in the NBA.

Oh, and let’s not forget about Andrew Wiggins (still just 21), and Ricky Rubio, and Zach LaVine, and rookie Kriss Dunn.

This team is going to be fun and good. They’ll compete for the playoffs this season and could be a title contender within three.

9. The Clippers are giving things one last go

The Warriors are the obvious favorites out west, but if there’s one team that can maybe possibly please-somebody-make-this-season-sort-of-competitive, it’s the Clippers. Assuming Blake Griffin doesn’t punch any more equipment managers (remember that?), they’ll have him for the entire season, and let’s not understate how much of a stud Griffin has morphed into. Dude can do everything on the floor.

You know about the explosiveness, and the improved and now automatic mid-range jumper. But did you know that Griffin might be the best passing big man in the league? He’s also quick enough to switch onto the Warriors guards if need be.

The problem for the Clippers: their depth. But L.A. will be really good this year and fun to watch, and if they catch a few breaks (an injury to Golden State) and get a monster series from Blake and Chris Paul, they could possibly make the Warriors sweat. Just a bit.

The current collective bargaining agreement has an opt-out that either the players or owners could trigger on Dec. 15. And that might happen, but not for the reasons we normally see. 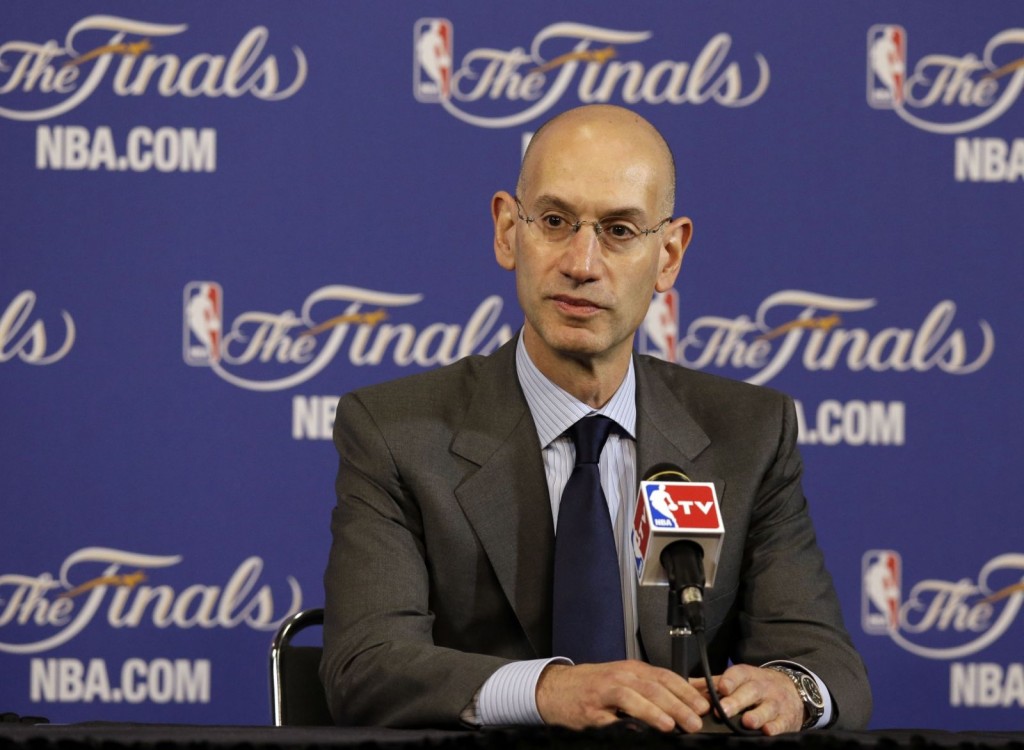 According to multiple reports, and NBA commissioner Adam Silver, the league and players have made “tremendous progress” in negotiations.

“Hopefully, we will be back to all of you in the not-too-distant future to say that negotiations have been completed,” Silver said last week.

The NBA is in a great place. Ratings are great, money is flowing, and unlike the NFL, it’s shown itself to have an actual soul. It’s nice to see that everyone involved recognizes this and that we won’t have to spend a summer delving into our old college accounting notebooks like we did in 2011.

Kobe is gone. So are Tim Duncan and Kevin Garnett. This was the offseason of goodbyes.

But Dirk’s still standing and because he is, every Mavericks game remains a treat for basketball fans. He might not be able to shoulder the same load he once did. But the feathery jumper is still there, as are the marvelous passing and brilliant subtle moves.

And of course, don’t forget the fade-away, one-legged bank.

6. Dion Waiters has his own team

Dion Waiters will likely be starting at shooting guard this season for a Heat team that won’t be very good.

This is how Dion Waiters once described his own game.

True Dion Waiters story from his Cuse days: he considered his game a combo of Kobe and Dwayne Wade so he had teammates call him Kobe Wade.

Dwight Howard is gone, which makes James Harden happy. Also, unlike last year, he didn’t spend this offseason doing the Hollywood thing. Harden also gets to play in Mike D’Antoni’s system this year, and play point guard (D’Antoni gave him that title during training camp), and play with shooters like Ryan Anderson and Eric Gordon.

The Rockets won’t stop anyone, but James Harden could average 30 points and 10 assists.

3. Warriors will make it rain

The Warriors added a new player this summer. Maybe you heard about it?

He and his new teammates seem to be gelling well.

Steph Curry to Kevin Durant to Klay Thompson for 3! The trio combined for 78 points on 51.9% shooting vs the Lakers. https://t.co/L3W1ZgCeLC

Something tells me this team is going to be pretty good. Just a hunch.

2. Russell Westbrook can now do whatever he wants

What will Russ do now that he no longer has to worry about meshing with Kevin Durant?

That’s what will make this season so much fun. Westbrook could lead the league in scoring and assists. He could be named MVP. (He’s currently the favorite.) He could lead the Thunder to the second round of the playoffs and throw shade at Durant all year. Or maybe he’ll do all of the above.

I can’t wait to find out.

1. The Warriors and Cavaliers are going to play each other in the Finals again

Never in NBA history have the same two teams met in the Finals for three straight years.

That’s likely to change this season.

A Cavs-Warriors NBA Finals is what basketball fans everywhere want to see. Everything else that happens this season is just gravy. That’s the main course we’re all waiting to eat.