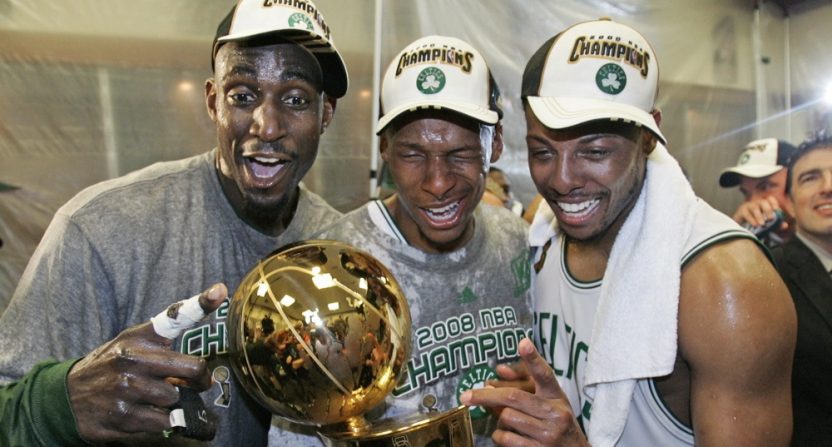 Ten years ago, the Boston Celtics ushered in a new era of superteams by winning the NBA championship.

Before Kevin Durant joined the Golden State Warriors. Before LeBron James, Chris Bosh and Dwyane Wade formed their elite squad in Miami. Before LeBron, Kyrie Irving and Kevin Love bonded, there were the 2007-08 Boston Celtics.

The Big Three of Paul Pierce, Kevin Garnett and Ray Allen won a title for the NBA’s winningest team. That union solidified Hall of Fame careers and improved the reputation of coaches.

Boston and Los Angeles Lakers are the NBA’s OGs. They – by far – have the most titles (17 for the Celtics, 16 of the Lakers). Their success, as well as rivalry, built the league. The NBA is a better place when both are doing well.

At the conclusion of the 2006-07 season, Boston (24-58) seemed like it was a long way from contention, finishing dead last in the Eastern Conference. Coach Doc Rivers and general manager Danny Ainge looked like guys who were on the verge of being fired.

After winning the 2005 Atlantic Division in Rivers’ first season, the Celtics became progressively worse. In 2006-07, superstar Paul Pierce averaged 25 points per game, but had to do so with his third-highest usage rate of his career (30.7), while shooting 43.9 percent.

Boston seemed cursed to mediocrity due to a series of unfortunate and tragic circumstances. The 1986 death of Len Bias — who passed away due to a cocaine overdose after being drafted — was a monumental setback. Bias was supposed to be the bridge from the Celtics of Larry Bird, Kevin McHale and Robert Parish, who won three titles.

Then All-Star Reggie Lewis died in 1993 due to a heart condition. In 1997, Rick Pitino and the hope of Tim Duncan was supposed to save the Celtics. Boston didn’t get the first pick in the draft lottery, Duncan went to the Spurs and won five championships and Pitino was a disaster, going back to college in 2000 to coach the University of Louisville.

But then came the summer of 2007. The first step was the acquisition of sharpshooter Ray Allen from the Seattle SuperSonics. That trade gave Boston another scorer to tag-team with Pierce. The next month, Boston made an even bigger splash by trading for former league MVP Kevin Garnett.

Suddenly, what was one of the worst teams in the NBA had three of the ten best players in the league. All talented, but all lacking an NBA championship. Expectations were high, but there were questions.

In the 2003-04 season, the Lakers formed their own superteam when aging Hall of Famers Karl Malone and Gary Payton signed as free agents to pair with Shaquille O’Neal and Kobe Bryant. This was supposed to be the greatest force the NBA had seen since the Jordan Bulls of the 1990s. But… the Lakers (56-26) didn’t even finish with the league’s best record. And if not for a miracle three-point buzzer-beater by Derek Fisher to beat the defending champion Spurs and take a 3-2 lead the Western Conference Semifinals, they might not have made the NBA Finals.

In the NBA Finals, Los Angeles inexplicably imploded by falling to the relatively starless Detroit Pistons 4-1. It also ended the Shaq-Kobe dynasty, as O’Neal was traded in the off-season to Miami.

The Lakers’ failure made some wonder if Boston would suffer a similar fate. Would egos tear them apart? Pierce, Allen and Garnett had all been alpha dogs on their teams. How would they react to sharing the ball and the credit? Could they coexist? The closest any of them had to championship success was Garnett reaching the 2004 Western Conference Finals where they lost to the Lakers.

Plus, the rest of the Celtics roster was an unknown. Rajon Rondo, in his second season, was a mercurial and poor-shooting point guard. Rookie forward Glen “Big Baby” Davis always looked like he was a cheeseburger away from being a right guard.

As it turned out, the regular season was a breeze.

Boston (66-16) enjoyed the greatest single-season turnaround in NBA history. The pieces fit together perfectly because Allen, Garnett and Pierce shared the ball. None posted a usage rate higher than 25.5. The defense was smothering, keyed by Kendrick Perkins, James Posey and Garnett. With a defensive rating of 98.9, this team was one of the best defensive teams of all-time. In November, the Celtics held the New York Knicks to 59 points.

As great as Boston was in the regular season, the Celtics struggled in the playoffs. They were pushed to seven games against Atlanta in a series where the home team held serve. Boston won at home by an average of 25.5 points, including a 99-65 defensive clinic in Game 7. But on the road, the Celtics lost close games by a grand total of 17 points.

In the Eastern Conference Semifinals, Boston’s road woes continued as it survived in seven games. Once again, the Celtics were perfect at home and winless on the road against a young LeBron James. James scored 45 points in Cleveland’s 97-92 loss at Boston. Pierce tossed in 41 points.

In the conference finals against Detroit, Boston finally lost at home (Game 2) but also finally won on the road (Game 3 and Game 6). They were back in the NBA Finals for the first time since 1987.

Standing in their way was a familiar foe: the Lakers. L.A., thanks to the midseason acquisition of Pau Gasol, was looking for its first post-Shaq championship. The Celtics-Lakers series had plenty of interest since this was a traditional rivalry spanning generations.

This series is remembered primarily for two moments:

Boston closed out the series at home in Game 6 with a 131-92 victory. It was one of the biggest routs in NBA playoff history. The long drought of misery was finally over for the Celtics.

This championship season altered people’s perceptions of the Big Three. Pierce, Garnett and Allen were lauded for their teamwork and leadership. It also changed how people viewed Ainge and Rivers. Ainge was the architect who pulled off these successful off-season moves while Rivers was the master strategist. Previously, he was known as the guy who blew a 3-1 first-round playoff lead in 2003 when he coached the Orlando Magic.

Boston returned to the NBA Finals two years later to face the Lakers again, but this time Los Angeles prevailed. Pierce, Garnett and Allen were aging and LeBron was entering his prime. Allen smartly bolted to team up with LeBron in Miami in 2013. That season, he made one of the biggest shots in NBA history when his 3-pointer in Game 6 denied the Spurs a championship and helped force a Game 7 which the Heat won.

In 2013, Garnett and Pierce were traded to the Brooklyn Nets and Rivers exited to coach the Clippers. It was the end of the Boston superteam era. Only Ainge remains to this day.

The word “superteam” has a negative connotation. At last year’s NBA Finals, LeBron startled many by saying he never played for a “superteam.” Pierce was irked by Durant’s decision to join the Warriors.

It’s silly. Whether it’s through trades or free agency, there will be more superteams in the future. The NBA will be better for it.