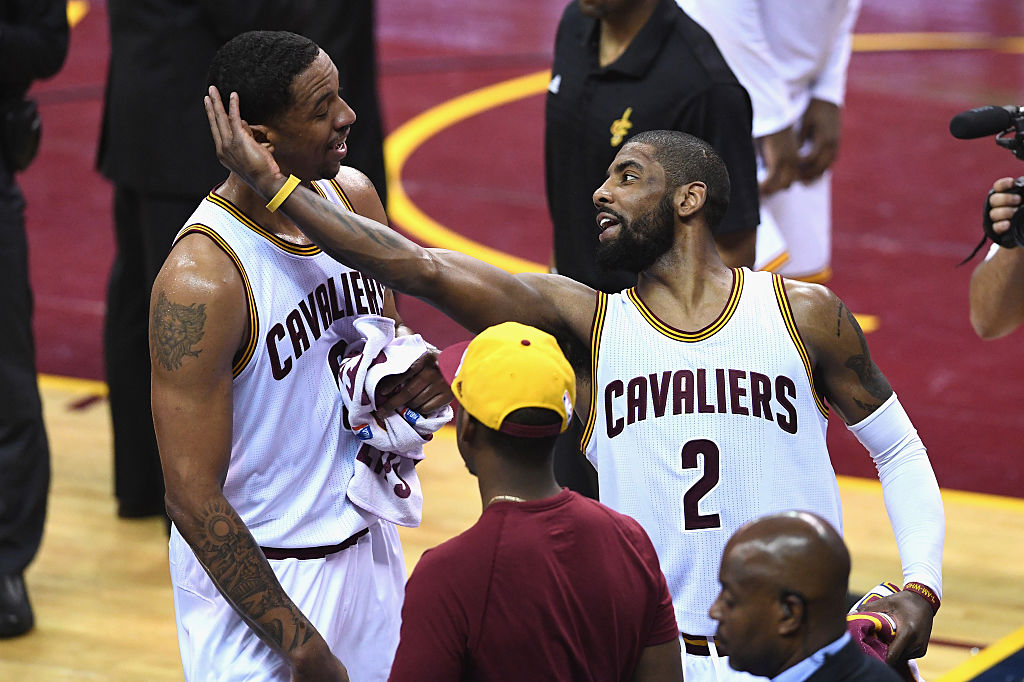 Most sports fans are non-players. Very few people who write articles like this actually played the sports they write about at a level above high school, and there are many (like me) who never played it above recreational ball with friends.

It’s easy for us to lose sight of how important emotion is in the competitions we watch.

Especially in the fantasy sports-analytics world, players become bundles of stats, or particular talents or attributes (“he’s a stretch-four with length”), and not actually people. We talk about them at length, project what they will do based on what they have done, and some of the time, we’re right.

Some of the time, we’re very, very wrong.

Game 3 of the NBA Finals was one of those instances. Based on the way Cleveland played defense most of the season, and the way they defended in the first two games against the Warriors, I didn’t see any way they could hold the Warriors to a score that their plodding offense would be able to beat.

That was best demonstrated by this video from BasketballBreakdown.com, which broke down the way the Oklahoma City Thunder had defended the Warriors compared to the Cavs defending the same plays and actions.

The Cavs were terrible, both mentally and physically, and the Warriors got open shot after open shot.

It wasn’t as though Steve Kerr didn’t tell his players they needed to be ready for Cleveland to bring it in a must-win game. He told them that for three days, and then told them a few times during the game. They just couldn’t find it. They could not convince themselves — or lie to themselves, really — that they absolutely had to have Game 3.

It’s very difficult to convince yourself that you have to give maximum effort in a situation where, deep in your heart and mind, you know you don’t. This actually was an issue with the Warriors all season, especially during the second half.

Golden State played very well against the very good teams, and other than one loss to San Antonio when they didn’t have Andre Iguodala or Festus Ezeli, they won all their games against those teams. They had many close games against .500 or worse teams, and lost a few of those contests. They were annihilated by the woeful L.A. Lakers on a Sunday afternoon national TV game.

This drove Kerr crazy, but no matter how hard he tried to get the Warriors to be more focused for these games, they couldn’t do it. They knew the truth, which is that they would win those games without doing it and overwhelmingly, they were right.

However, one thing this team has also done all season (with exactly one exception) is come back extremely focused after losses. That one exception, of course, was Game 4 of the Western Conference Finals in Oklahoma City, and it’s the single biggest cause for concern for Warriors fans right now. Without that data point in the equation, Warriors Fan could feel pretty good about his (or her) team’s reaction to the Game 3 loss. But with that being the most recent loss prior to Game 3 of the Finals, a repeat performance is certainly in the realm of possibility.

But let’s not do what everybody did after the first two games, which is micro-criticize the losers without giving credit to the victors.

After each of the first two games in these Finals, the Cavaliers looked like victims of circumstance. The Warriors play a style and level of basketball, on both ends of the floor, that is unparalleled in the NBA. A few teams come close; San Antonio and Oklahoma City come to mind. Cleveland, by virtue of playing in the Eastern Conference, has played very few games against this kind of opposition, and thus had no chance to know whether it was really prepared to take on the Warriors.

They weren’t, as it turned out. But Game 3 is an indication that the Cavs have re-calibrated and they not only met the Warriors’ energy, but exceeded it. They played with much more vigor than in the first two games, especially on defense, when their effort was roundly criticized and (I’m sure) looked awful on film.

Speaking of ugly film, Golden State has now lost all four Game 3s in this postseason, and while Steph Curry missed the first two, those games have also been marked by a lack of energy and effort. This team has played well with and without Curry, but if the Dubs don’t have Curry AND they don’t play with emotion and energy, they are going to lose.

This loss, their worst of the postseason by both number (30) and importance (it’s the Finals, after all), comes at a really bad time. A win in Game 3 would have virtually guaranteed Golden State a series victory and its second straight NBA championship. Instead, they not only lost, but lost in a way that takes the pressure off the Cavs and puts it squarely on the slim shoulders of Curry.

The Cavs will come into Friday’s game brimming with confidence, feeling that all they need to do to tie the series is to replicate the effort they played with in Game 3. The Warriors will come in wondering what the heck has happened to their MVP. In three games, he has scored 48 points. Warriors coach Steve Kerr acknowledged that Curry “started the game poorly with turnovers, and gave up some backdoor cuts. He didn’t seem like himself.” Curry hit a few threes and finished with 19 points, but he never had anything even approaching a rhythm, either shooting or passing the ball.

What about Klay Thompson, you say? Well, yes, Thompson has struggled even more than Curry in this series, and has scored just 36 points in the Finals to this point. He is, though, Robin to Curry’s Batman, and while there have certainly been games when he has carried the team to victory — most recently, Game 6 against Oklahoma City — he’s not the MVP.

Curry is the guy this team looks to for inspiration, and when he’s playing this badly, it’s unsettling for everyone. It goes way beyond shooting poorly. The Warriors can deal with that, because they know that sooner or later he’s going to find the range. The problem comes when his shooting problems affect the rest of his game, which they are now. If he’s costing them possessions with turnovers and losing guys on back cuts, his shooting problems are exacerbated because the Warriors can’t run their offense to get him the shots he needs to get untracked.

Obviously, Steve Kerr is not going to bench Steph Curry, but there is some intrigue regarding the starting lineup. The Warriors played the Cavs even when Draymond Green was at center, which means they were -33 when anyone else was in there. They were terrible at the start of the game and the start of the third quarter, an indication that something is not clicking with the starting unit. Obviously Curry is a big part of that, but we may see the Warriors start small in Game 4. Kerr told the media there would be no changes, but he lied last year and I don’t think he’d hesitate to do it again.

One final note: The single day between Games 3 and 4 is the only one-day break between any two games in the entire Finals, and I think it benefits the Warriors. LeBron James had a great Game 3, but played 40 minutes despite the Cavs’ huge lead in the second half. They tried to get him some rest in the last couple of minutes of the third quarter, but Steph hit a couple of threes to bring the lead down to 18 and Lue brought James back in with :47 left in the period.

Last year, the drop-off in James’ effectiveness was noticeable when there was only one day off between games, and it will be interesting to see how he reacts this time around. As far as the Warriors go, they’re 8-0 in the playoffs with one day’s rest, so there’s that.

So we don’t know yet if we have a series, but we have learned a few things.

1) The Cavs are good enough, now that they know this is a 78 RPM series and not a 45 RPM series, to make the Warriors work hard for shots.

2) The Warriors have to play with a sense of desperation, which should come naturally because I’d imagine the idea of this becoming a best two-out-of-three series isn’t very interesting to them.

3) No team-sport athlete’s perceived value ever dropped more in a game in which he didn’t play than Kevin Love’s did in Game 3. His replacement in the lineup, Richard Jefferson, last started a Finals game against Steve Kerr’s San Antonio Spurs 13 years ago. He has actually played well this postseason, and he was a big part of the defense and ball movement that helped the Cavs cruise to a Game 3 win.

It goes beyond just adding Jefferson to the lineup and subtracting Love. Jefferson is a 3, which moves James to the 4, where he is much more effective at this point in his career. He took only two 3-point shots last night, and the Cavs started playing really well this spring when LeBron stopped shooting large amounts of long shots.

So let’s remember, people. These people are people, just like you and me, only taller and richer. They emote. They get complacent at times. They won’t always meet our expectations, for better or worse.

If Richard Jefferson continues to play well and the Splash Brothers don’t — it only needs to happen for 10 more days, starting Friday night — who knows what’s going to happen in this series?

The Warriors — if they want to avoid a Game 7 — must inject their emotions (and their Death Lineup) into these Finals with more firmness and focus.