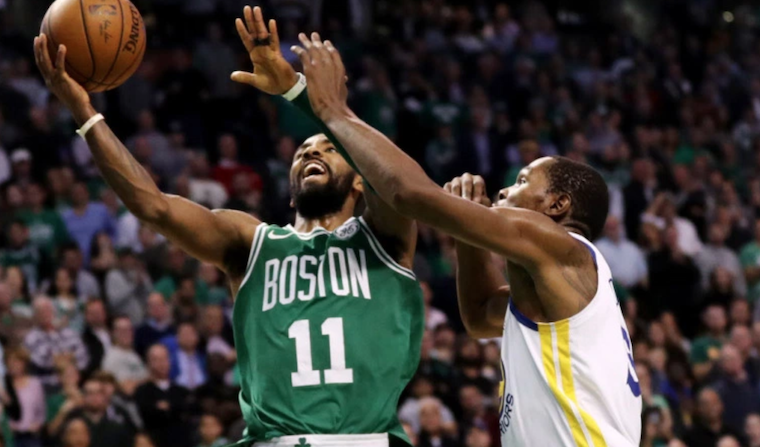 We’re still a week away from the NBA announcing the starters for the 2018 All-Star Game starters, and 12 days until the reserves are unveiled. Scheduled for Feb. 18, the NBA All-Star Game will be played at the Staples Center in Los Angeles and the format will be different for this year’s edition. Two captains will choose the teams, which will be announced on Jan. 25.

With more than a week to go until we know who will be selected, we’re taking a head start on picking this year’s NBA All-Stars. Our esteemed panel of one chose the teams based on traditional selection rules: Starters for each team comprise of two guards and three frontcourt players. Reserves consist of two guards, three frontcourt players and two “wild card” picks, making the 12 players from each conference.

Here are our picks for the 2018 NBA All-Star rosters:

Irving has been phenomenal in his first season with the Celtics, averaging 24 points and five assists per game for the Eastern Conference leaders. Kyrie is seventh in the league in Win Shares, seventh in Value Over Replacement Player (VORP) and 11th in Player Efficiency Rating (PER).

DeRozan has made huge strides on offense at age 28, shooting a career high 36.9 percent from three going into Thursday’s schedule.

How LeBron James is still at this level in his 15th season in the league, 12 days after his 33rd birthday, is nothing short of incredible. His scoring average is the highest it’s been since the 2009-10 season, his last in Cleveland before leaving to Miami. He’s averaging a career-high nine assists as the primary point guard while Isaiah Thomas was out and more than a block per game for the first time in nine seasons. LeBron also leads the league in VORP, is second in Win Shares and third in PER. All hail the king.

The other two frontcourt players are the league’s pre-eminent unicorn freaks, Antetokounmpo and Embiid. Giannis is third in the league in Win Shares and averaging a double-double for the first time in his career. And in his first full healthy season, Embiid is averaging nearly 24 points and 11 rebounds while leading the young Sixers toward a playoff berth.

Oladipo has to be the early frontrunner for Most Improved Player. Finally leading a franchise after being traded from Oklahoma City in the Paul George deal, Oladipo is averaging 24.6 points per game on 49 percent from the field and 41 from three to go with more than five rebounds and four assists, all career bests.

Lowry is having a relatively down season in terms of scoring, but his 3-point rate is really good— 39.2 percent and eighth in the league in total threes made— while barely edging out other East guards that we’ll soon discuss.

These three were easy calls.

Horford has been the fulcrum of the Celtics offense and one of the anchors of its top-ranked defense. He’s shooting 42.2 percent from three and is also fourth in Defensive Win Shares and 12th in VORP, right behind Lowry.

Drummond has been phenomenal for the surprising Pistons, leading the league in Defensive Win Shares and defensive rating with career highs in field goal percentage and rebounds, with 15 per game. He’s also fifth in the NBA in VORP.

People seem to enjoy hating on Love, but he’s still averaging more than 19 points and nine rebounds per game while shooting 41.2 percent from three. Statistically, he’s been about a top-20 player this season, which merits All-Star status.

Beal was the easy choice, while Porzingis was a tougher decision.

John Wall even said that Beal is the MVP of the Wizards so far. He’s averaging career highs in scoring and rebounding and is in the top 10 in field goals made and points scored. He’s the best guard in the East among those not mentioned yet and is deserving of his first All-Star selection.

Porzingis has been slumping lately, but he’s carried this Knicks team to a surprising start while averaging 23.7 points per game, leading the league in blocks and is shooting 37 percent from deep.

Walker and Beal were so close statistically, but Beal’s ability to help guide the Wizards during John Wall’s injury gave him the slight edge against Walker’s sorry Hornets squad.

Simmons is going to be an All-Star sometimes soon, but the toughest choice was leaving out Tatum. His counting numbers in terms of scoring aren’t there yet, but he’s been a great shooter and defender for Boston. His time will come soon as well.

Harden has been the MVP of the league for the first half. He leads the league in scoring, Win Shares and PER. Even with Chris Paul now in and out of the Houston lineup, he’s still averaging over nine assists per game while attempting an insane 10.5 free throws per contest.

Whether to start Curry or Russell Westbrook was one of the toughest internal debates. Curry’s scoring (27.9 points per game) and PER (fourth in the league) barely outweighed Westbrook’s sizable advantage in rebounds, assists and VORP.

Davis is averaging nearly 26 points and over 10 boards per game, while having career highs in shooting percentage and playing the best defense of his career. He’s sixth in the league in Win Shares as well for a Pelicans team scrapping for a playoff spot.

Though Towns still needs to work on his defense, his offensive game has further blossomed this season. While averaging fewer points on four fewer field goal attempts per game, his rebounding numbers are still good and he’s now at 40.9 percent from three on more attempts from deep this season, helping him rank fourth in the league in Win Shares (his bloated minute totals help too).

Easily the best reserve, Westbrook is still nearly averaging a triple-double (25.1 points, a league-leading 10 assists and 9.6 rebounds per game). He’s seventh in PER and his Win Share numbers are down due in part to his improved teammates. But Westbrook is still one bad dude.

Butler is listed as a guard on the official All-Star ballot, but he would’ve started over Towns had he been deemed a frontcourt player. His improved stats and excellent leadership will help the Wolves to their first playoff appearance in 14 years.

Cousins was the closest to challenging Towns for the starting nod among West frontcourt players. Boogie is averaging 26 and 12 while maintaining his shooting percentage from three despite 1.2 more attempts per game. Most surprising is his defense; Cousins is sixth in the league in Defensive Win Shares for the improved Pelicans.

Aldridge has been a godsend for the Spurs with Kawhi Leonard injured. He’s at 22.6 points and 8.7 rebounds per game and is one of two players, Towns being the other, who are in the NBA’s top 12 in both Offensive and Defensive Win Shares (8th in total Win Shares). LMA might end up in the top 10 in MVP voting this season.

Jokic may not have the gaudy shooting numbers other big men have, but he’s averaging nearly 16 points, 10 rebounds and five assists per game and is 16th in the league in VORP. There’s definitely a drop-off among big men after Aldridge, but Jokic is the best of that bunch.

With Chris Paul having missed nearly half the regular season so far, Lillard was easily the best remaining guard after Harden, Curry, Westbrook and Butler. Dame is averaging 25 points and 6.4 assists per game while placing 13th in the league in VORP.

Jordan leads the league in rebounds per game at 15.1 and is 12th in Win Shares and 15th in both offensive and defensive Win Shares. He’s a major reason why the surging Clippers are close to the playoffs in the West.

Adams and Capela were really close to making it, but were barely edged out by Jokic and Jordan. Adams is still only 24 and is enjoying his best season, with career highs in points, field goal percentage, rebounds and PER while leading the NBA in offensive rating and offensive rebound percentage.

Capela is a statistical darling, leading the league in field goal percentage and ranking sixth in PER, blocks per game and rebounds per game, but he only plays 26 minutes per game, making him less valuable overall than other players. Among all the players who didn’t make it, Capela was the hardest to leave off.

Green is a player who does it all, ranking fifth in assists per game, 15th in blocks and 20th in VORP. But the West was too stacked to include him this season.