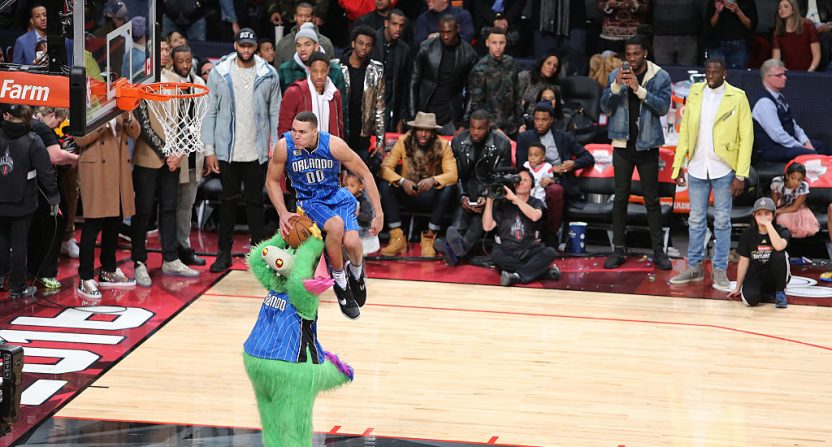 The contestants for the 2018 NBA All-Star Game Saturday in Los Angeles were announced Thursday night.

But it’s the Slam Dunk Contest field that really stands out. Let’s take a look at the four high-flying players in this year’s field…

The Orlando Magic’s 6’9″, 220-pounder was the runner-up to Zach LaVine in the incredible 2016 dunk contest. Gordon put up three perfect scores in that contest, and one dunk he had over the Magic mascot Stuff the Magic Dragon was one of the most amazing dunks we’ve ever seen.

Gordon, 22, also appeared in last year’s dunk contest, but didn’t make it past the first round. Perhaps the Arizona product is more motivated this time around and puts on a show like his 2016 appearance.

Like Gordon, Oladipo put together a terrific dunk contest — in 2015 — but finished as the runner-up to LaVine. The 6’4″ guard got one 50-dunk in there, showing off his crazy bounce and athleticism:

Last season, Oladipo won the award for NBA Dunk of the Year:

Now Oladipo is putting together a sensational season with the Pacers, averaging 23.9 points per game. It’s resulted in Oladipo being selected to his first All-Star Game, so he’ll get two chances on All-Star Weekend to show off his talents.

As a rookie and a point guard, is a very interesting, but very worthy participant in this year’s field. Just look above at the dunk highlights the Dallas Maverick has already put together in 44 NBA games.

Smith — the ninth overall pick in 2017 out of North Carolina State — is incredibly explosive with ridiculous elevation out of his 6’3″ frame. The dunk contest is a big-time stage for a rookie, but you can see with the authority Smith throws down those jams that he’s definitely not lacking in confidence. Even his missed dunks are spectacular.

I love Dennis Smith Jr. so much all he cares about is landing the biggest poster dunk in NBA history and he wont stop till it’s his pic.twitter.com/7fBAGM6Mtj

2. Nance plays for the Lakers, and the All-Star festivities are of course in Los Angeles. The Staples Center should be going wild in support of the third-year forward (who is quietly putting together a terrific season).

3. Well he’s been arguably the best damn dunker in the league this season. Look at just a couple of the absurd dunks — which we’ve covered on the site — he’s thrown down in the 2017-18 campaign:

So, this has all the makings of an outstanding dunk contest. Hopefully these guys won’t even need props or assistance to throw down their jams (though we certainly wouldn’t complain about more crazy dunks over mascots like Aaron Gordon’s).

The All-Star Saturday Night events will take place Feb. 17, and will be shown on TNT.

UPDATE: Well, Aaron Gordon has pulled out of the competition, and has been replaced by Utah Jazz star rookie Donovan Mitchell. But that should be just fine: