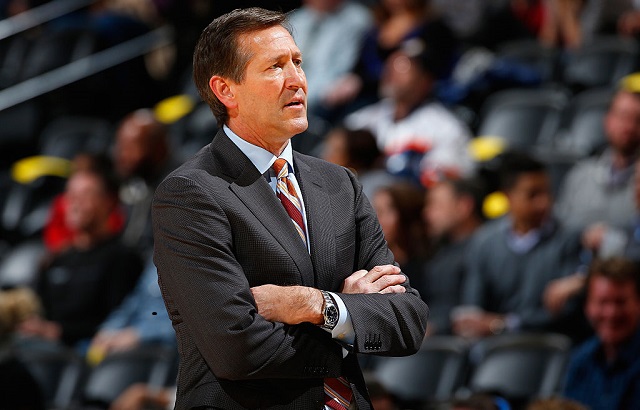 In our modern sports and social media landscape, we’re always looking for the next domino to fall. NBA training camps begin next week, but prediction season is already in full swing.

With player salaries increasing at record rates, coaches in the league have become all the more expendable. It’s difficult to say which NBA coaches will be in danger of losing their jobs several — or a few — months from now, but here are five names to think about who are under intense pressure to succeed. We’ll call this list one of educated speculation, a preseason hot seat watch.

He may have just been hired, but pressure from multiple fronts will be weighing on Hornacek immediately. After three straight years of missing the playoffs and two disappointing seasons under team president Phil Jackson, the Knicks hired the former Phoenix Suns coach and made a series of splashy offseason moves. It doesn’t seem like another trip to the lottery will be acceptable.

Derrick Rose came over in a multi-player deal with Chicago, and Joakim Noah signed with the team soon thereafter. Courtney Lee was signed from Charlotte to start at shooting guard, and Brandon Jennings was signed to back up Rose. Expectations are higher than the team is likely to fulfill, which is usually a recipe for scrutiny, especially in New York.

Hornacek said he’s going to run his own fast-paced offense combined with some of Jackson’s “triangle principles. But if the team doesn’t get off to a strong start, how long of a leash will Hornacek ultimately have?

Jackson said the young Knicks hadn’t made enough progress in the roughly season-and-a-half under Derek Fisher and was fired in favor of triangle disciple Kurt Rambis, who remains on the coaching staff. With star power back in NYC, the criticism Hornacek will face if things don’t start out well will become intense, and hot, immediately. Rambis would be an easy and convenient replacement — albeit an unpopular one — hanging an odd Sword of Damocles over Hornacek’s head from the outset.

What do the numbers 27, 34, 45, 30 mean for the Pelicans? Those aren’t today’s lottery numbers (though you can try them) but the number of regular season wins New Orleans has had since drafting Anthony Davis first overall in 2012.

Davis is still 23 years old, but as long as the Pelicans continue to flounder in the uber-competitive Western Conference, they’ll be wasting what could be some of The Brow’s best years.

Gentry was brought in, in part, to “infuse their offense with more creativity and pace,” as ESPN’s Marc Stein reported in 2015. NOLA accomplished that last season, finishing ninth in the league in possessions per 48 minutes, but finished 18th in offensive efficiency and ended up in the league’s bottom five in defense.

If things don’t improve in Gentry’s second season in a brutally tough Southwest Division, ownership’s patience could run out with Gentry after the team fired Monty Williams following the 2014-15 season, despite winning 45 games and reaching the playoffs.

His Memphis Grizzlies were so ravaged by injuries that the team broke a record last season for the most players used during a regular season — and they still made the playoffs under his watch. But disagreements with management ultimately ended in his departure for Sacramento, where the Kings are opening a new arena that was the deciding factor preventing the franchise from moving to Seattle.

The problems? Owner Vivek Ranadive seems to change his mind on management and personnel almost as often as Twitter dispenses molten-hot takes, and probably wants immediate results and playoff revenue for the Golden 1 Center. And then there’s the DeMarcus Cousins dynamic.

Joerger could be out quickly if he and Boogie don’t get along. Just look at what happened with George Karl. Coaches are never going to win in a battle with a star player, and Cousins is the league’s best example right now.

Turmoil in SacTown has already begun. Rudy Gay said this week that he won’t consider an extension with the Kings and will leave the team next summer. If Joerger can navigate the treacherous minefield that is this franchise, he can finally bring a sense of smart continuity and stability the team needs. If not, he’ll just be another capable coach discarded in California’s capital.

#Pacers coach Nate McMillan on the rookies/free agents: 'They need to get in better shape.' https://t.co/OedWO555BC pic.twitter.com/sNBVnS7eu0

Team President Larry Bird fired longtime coach Frank Vogel mainly because he didn’t do enough to improve the team’s pace and offensive output. Hiring McMillan, the longtime Seattle and Portland coach who was Vogel’s lead assistant, is a seemingly curious choice in that regard.

His Sonics teams never finished higher than 15th in the league in pace, and his Blazers squads finished 28th, 29th, 29th, 30th, 30th and 30th in his six full seasons. They finished 15th in 2011-12, but only after McMillan was replaced with Kaleb Canales over the final 23 games that season. So why was McMillan hired to replace Vogel?

Jeff Teague and Thaddeus Young were added to try to improve this team’s offense, but Bird’s patience may end up being thin with this team. Indiana will be competing with Detroit for second place behind Cleveland in the Central Division, and McMillan will be in unfamiliar territory in trying to speed up this Pacers offense.

Let’s be clear here: The Raptors love Casey. His players do and team president Masai Ujiri does. Casey just received a contract extension, he’s a great guy. BUT…

Expectations have never been higher for a franchise that reached its first conference finals last season, falling in six games to the eventual champion Cavaliers. DeMar DeRozan signed a max contract to stay in Ontario. The Raptors are providing a proven winner the Air Canada Centre is missing given the Maple Leafs’ perpetual disappointments.

If this team falters or has what’s perceived as an early exit, whether that’s in the postseason or even missing it altogether (really, really, really unlikely), Casey would be a very easy and convenient fall guy for everything.

This is the nature of coaching in the NBA. It’s going to be harder and harder for players to be discarded, so the leeway and security for most coaches will be even further diminished. So to all the NBA head coaches in the league: Good luck with that.