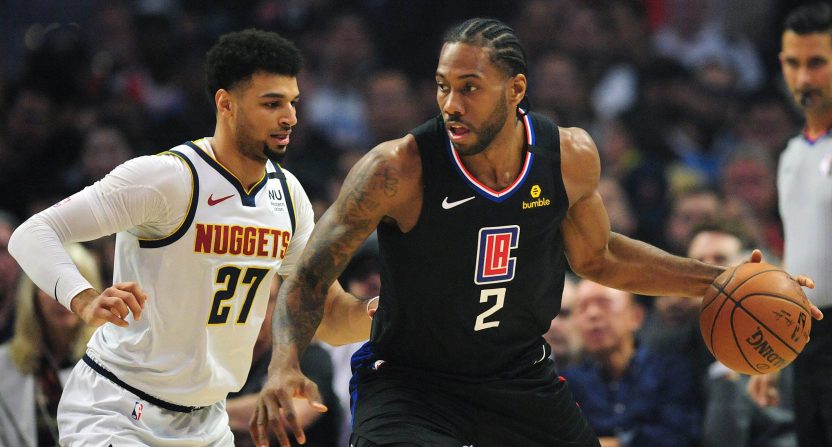 The 2022-23 NBA season tips off next month, and the league will welcome back key players who didn’t see a minute of action last season. Some missed time due to injury. Others didn’t return due to other reasons.

However, the NBA is a better place with these five guys returning to the floor:

Kawhi Leonard is a three-time NBA champion who’s beaten LeBron James and Steph Curry in the NBA Finals. When healthy, he’s arguably the best two-way player in the league. In the summer of 2019, Leonard signed with the Los Angeles Clippers to be the face of a team trying to wrestle the L.A. market away from the Lakers. Well, things haven’t gone according to plan. The Clippers were upset in the second round of the NBA bubble and watched the Lakers win it all. Then the following season, Leonard suffered an ACL tear and saw his team reach the Western Conference Finals without him.

He sat out all last year due to his knee injury. A more muscular Leonard will try to return to dominance. He hasn’t played more than 60 games since 2016-17, so expect plenty of load management again.

Ben Simmons might be the biggest mystery of this season. No one, possibly not even his teammates, knows what to expect from a mercurial star on a roster filled with mercurial stars. The last time we saw Simmons play meaningful basketball, he was short-circuiting in a way that led his coach to question his resolve. That led to a long standoff between Simmons and Philadelphia 76ers management resulting in a trade to the Nets. But once he arrived with the Brooklyn Nets in February, he still didn’t play.

Simmons (back injury) was expected to return to action for the playoffs, but that didn’t happen. If Simmons is healthy physically and mentally, he’s a unique talent. He’s a 6-foot-11 passing phenom and probably the best one-on-one defender in the league. But does anybody know what Simmons we’re going to see?

Zion Williamson and Ja Morant were college stars who were supposed to be Generation Next. Morant has exceeded the hype with his death-defying dunks. But with Williamson, we just haven’t seen enough of him on the court. The questions about his unusual body and whether it can hold up over the rigors of an NBA season will continue. He missed all of last year due to a broken bone in his foot. Still, the New Orleans Pelicans signed him to a five-year, $193 million contract extension.

Williamson showed up to camp in noticeably better shape. At 6’6″, 284 pounds, there has never been a player like him. If he retains his explosiveness and improves as a defender, New Orleans will have an unstoppable force in the paint. He averaged 27 points on 61.1 percent shooting two seasons ago.

Remember how sensational Jamal Murray looked in the 2020 playoffs? He averaged 26.5 points on 50.5 percent shooting, including 45.3 percent from beyond the arc. He along with Nikola Jokić carried the Denver Nuggets to a surprise Western Conference Finals appearance where they lost to the eventual champion Los Angeles Lakers. Denver looked like the team of the future. That didn’t quite happen.

Murray was limited to 48 games in 2020-21, including a season-ending ACL tear. He spent all last season recovering from that injury. In his absence, Jokić developed into a two-time MVP, but to compete in the West, the Nuggets need a healthy Murray. The lineup of Jokić, Murray, Aaron Gordon, and Michael Porter Jr. has only played five games together (going 4-1 in the spring of 2021). It’ll be interesting to see them for a full season.

We’ll forever wonder what John Wall could have been. Just as he was entering his prime, knee and foot injuries derailed his career. He spent the entirety of last season in cold storage as Wall and Houston Rockets management reached a mutual agreement for him to sit out 2021-22. The Rockets didn’t want him there. And Wall didn’t want to be a part of a rebuild.

After a buyout, Wall signed this summer with a contender. His role with the Clippers will be much different than he’s used to. The five-time All-Star is no longer a go-to player. At best, he’ll be the third option behind Kawhi Leonard and Paul George. He may not even be the starting point guard. But after battling mental health issues, you get the sense Wall will be happy just playing basketball again.