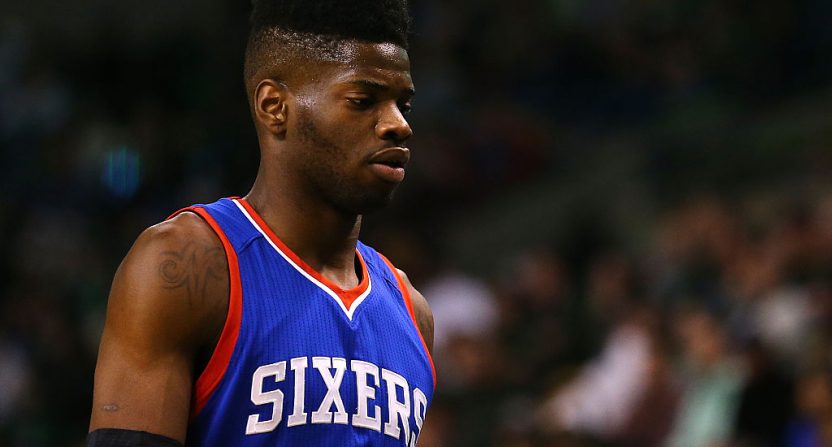 The Philadelphia 76ers have unclogged their center issue, dealing Nerlens Noel to the Dallas Mavericks in exchange for small forward Justin Anderson and a first-round pick.

Not a bad deal for the #TrustTheProccess folks.

Wait, there’s more? The 76ers are also getting center Andrew Bogut, who could yield a nice little return in the coming hours.

Dallas center Andrew Bogut will go to the 76ers in the Noel trade too, league source tells @TheVertical.

Oh, well at least they got a first-round pick for Noel!

*Sees Dallas in 12th place in the West*

Essentially, the 76ers traded Noel for two second-round picks and Justin Anderson. Barring a change, Bogut will be waived and won’t bring in any assets.

Why would Philly do this? Well, besides the long-jam at center, the 76ers weren’t comfortable paying Noel, a pending restricted free agent, a near-max contract. The 22-year-old averages 8.9 points, 5.0 rebounds, and 0.9 blocks per game in 20 minutes this season. The market for centers is oversaturated, so general manager Bryan Colangelo wasn’t going to get a ton in return. However, the deal for Noel is a headscratcher. How didn’t he get more?

The Mavericks aren’t likely to qualify for the postseason, so the first-round pick will surely become two seconds. Second round picks have more value than some believe, but not so much as they’re the main piece for a starting caliber center like Noel. Anderson, meanwhile, is a rangy wing who can’t really shoot. The 23-year-old has some length and can occasionally catch fire, but at this point, he’s a back-up.

It’s quite the change of philosophy for the 76ers. As Tom Ziller of SB Nation points out, former GM and asset mastermind Sam Hinkie turned *bad* players into second-round picks. Now, Colangelo turned one of his *best* assets into practically nothing. Perhaps there’s more than meets the eye with the deal, but for now, it’s a clear loss on the 76ers part.

Noel is an immediate upgrade at the position for the Mavs, who’ve used Bogut (when healthy) and Salah Mejri, while also going small at the center position. Noel isn’t very talented offensively, though he’s an excellent rebounder and shot-blocker who will fit in nicely with a rebuilding Dallas squad. The Mavericks still have some things to figure out, but Noel and Harrison Barnes give the organization two improving youngsters with encouraging potential. Dallas will likely match whatever offers throw Noel’s way this offseason.

Philadelphia didn’t have to trade Noel. Colangelo was more comfortable in smoothing out minutes for Joel Embiid (who’s hurt) and Jahlil Okafor than waiting and getting the most value for Noel in the summer. Does the move cripple the 76ers long-term? No. But, in today’s NBA you need to maximize assets, especially when you’re a bad team.

The 76ers are no longer trusting the process. Colangelo is shaping the roster his way, even if that means giving up talent at half price.