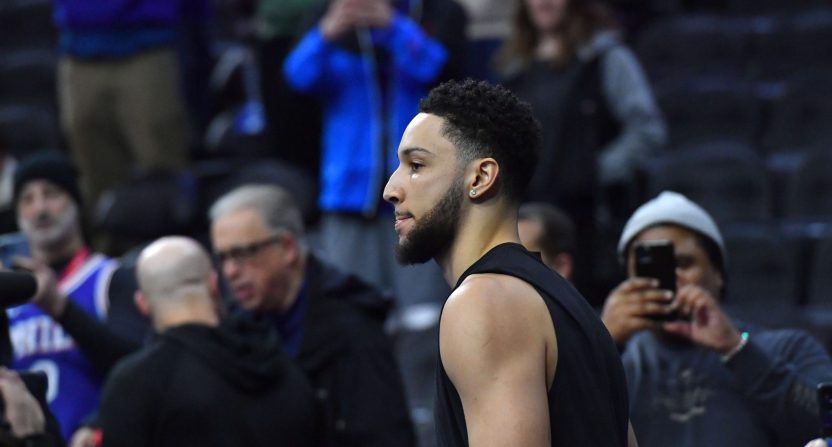 After a long and messy divorce with the Philadelphia 76ers that ended with him getting traded to the Brooklyn Nets, Ben Simmons is back in Philly as a member of the opposing team.

While Philadelphia is the City of Brotherly Love, that doesn’t always show with the city’s sports fans. Simmons got a lot of the heckling that Philadelphia is known for, even before Thursday’s game got underway.

The heckling started before Simmons even arrived at the arena. Some of it required adult supervision. Other hecklers had cleaner language but were no less harsh.

“Why the grievance? Why spit in the face of Sixers fans?”

The jeering only continued once Simmons got to the Wells Fargo Center and took the floor.

He's expected to join the Nets on the bench tonight on TNT pic.twitter.com/HxQIsso6fD

Ben Simmons has taken the floor in Philly. pic.twitter.com/UCMJqkqifH

Things are getting a 𝙡𝙞𝙩𝙩𝙡𝙚 weird down at court level 😳 pic.twitter.com/H2GM0MPldJ

He did not #Sixers pic.twitter.com/nzK22MmgMS

One last huge round of boos for Ben Simmons as he leaves the court #Sixers pic.twitter.com/4MTaioSy1m

The Philadelphia fans will have to wait a little longer to boo Simmons during a game. While Simmons will be on the bench on Thursday, he’s still getting over a back injury and as such, won’t play in the game.

Thursday is the final regular season matchup between the two teams this season.  With that, we won’t see Simmons on the Wells Fargo Center court during a game this season — unless the two teams meet in the playoffs. That’s something to look forward to if it happens.

Judging by the reaction of the fans on Thursday, we’re guessing that the Philadelphia faithful will be ready to greet Simmons whenever he returns to the Wells Fargo Center in the future.