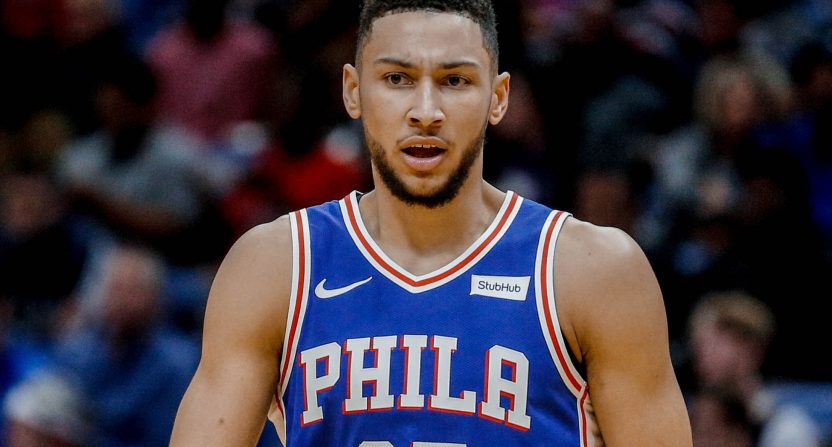 The Philadelphia 76ers never should’ve let it come to this.

Sixers president of basketball operations Daryl Morey had the entire offseason to trade Ben Simmons and bring some finality to a situation soaked in uncertainty. It was the right move for the team to make and the right move for Simmons, who won’t overcome the perception among Philadelphia fans that he shies away from the climactic moments, refuses to improve his game (particularly his outside shot), and is afraid to become a star player who can lead his team to a championship.

Instead, whether because Morey and general manager Elton Brand didn’t get a trade offer they liked or somehow believed that Simmons’ status with the team could be salvaged, the Sixers let bad feelings fester and rot. Perhaps they underestimated Simmons’ immaturity as well. On Tuesday, tensions between Simmons and the Sixers became septic with the sulking guard getting sent home after refusing to take part in defensive drills during practice.

Rivers then told Simmons he should go home, and Simmons dropped the ball and left.

Simmons was subsequently suspended for the Sixers’ season opener against the New Orleans Pelicans Wednesday night (Oct. 20). Joel Embiid told reporters that it’s not the players’ job “to babysit somebody.” While the rest of the team is gearing up for the season, an outlier is checked out, ready to leave town.

“Our job is not to babysit somebody.”

How does the relationship recover after that? Simmons disrespected head coach Doc Rivers and clearly irritated his teammates with that behavior. Until this is somehow resolved, the pouting guard is the distraction that all teams want to avoid. Questions to players and coaches about Simmons will be an everyday occurrence.

Even worse, Simmons is probably hurting his trade value and robbing the Sixers of any leverage while he tries to force a trade. Who wants a malcontent to come over and possibly upset team chemistry?

Ben Simmons practicing in sweatpants with his phone in his pocket. pic.twitter.com/MEdQLxudcK

Simmons’ Sixers career was effectively finished after Philadelphia’s Game 7 loss to the Atlanta Hawks in last season’s NBA Eastern Conference semi-finals. He was never going to overcome the perception of wilting under playoff pressure with his team’s season at stake.

In particular, the image that will live in infamy is Simmons passing up a fourth-quarter dunk that would’ve tied the game with three-and-a-half minutes remaining. Rather than make a play that would’ve ignited the crowd and perhaps restored some confidence to a player afraid to shoot, Simmons took a moment that stars covet and passed the ball to Matisse Thybulle.

Philadelphia eventually lost the game, 103-96, falling in the second round of the NBA Playoffs after finishing as the Eastern Conference’s No. 1 seed during the regular season.

In that moment and surely in the weeks and months leading up to it, Simmons lost the confidence of his teammates and coach with his playoff performance last season. Instead of emerging as a star, he turned away from opportunity rather than seize the moment. Embiid said Simmons passing up the open dunk was “the turning point” of the game.

Joel Embiid's reaction to Ben Simmons passing up on an open dunk tells the whole story of Game 7 between Sixers and the Hawks 😅pic.twitter.com/3q12RTb075

The defining quote of the Sixers’ 2020-21 season ending, of failing to fulfill expectations, was an exasperated Rivers saying that he didn’t know if Simmons could be a point guard for a championship team.

“I don’t know the answer to that right now,” Rivers said. It was a stunning admission. Media and fans are accustomed to seeing a coach support a player in failure, to deflect by saying he has to talk to the player, watch the tape, etc. Rivers threw up his hands. Simmons surely felt betrayed by his coach.

"I don't know the answer to that question."

The moment Doc Rivers said this about Ben Simmons, it was over. 😳pic.twitter.com/MXSBvF7OOE

Rather than contend for a title, the Sixers watched the Hawks play the Milwaukee Bucks in the East finals, followed by the Bucks going on to win the 2020-21 championship. And now, Philadelphia goes into a new season dealing with an inevitable scenario that could have been avoided.

Knowing he’d lost the confidence of coaches, teammates, and fans, Simmons asked to be traded during the offseason. It was the best decision he’s made in months. It’s glaringly obvious now that the Sixers should’ve accommodated him.

To be fair, Morey didn’t want to simply give Simmons away. They know he still has star potential at just 25 years old, and nothing would make Philadelphia’s front office look worse than Simmons fulfilling that promise elsewhere. More importantly, a trade has to improve the team, to help their chances to contend with the Bucks and Brooklyn Nets in the East. Rumored offers from teams including the Portland Trail Blazers, Minnesota Timberwolves, and Sacramento Kings haven’t met that standard.

Yet the Sixers may now be facing a situation where the team would improve by getting rid of Simmons. Yes, getting an impact player in return, someone who will be a part of the regular rotation, is the expectation. But other teams know that Simmons wants out, that Philadelphia essentially has to trade him. So why make the offer that Morey can’t refuse?

If there’s a bright side to this, it might be that the Sixers know this cannot continue. Simmons can’t be allowed to undermine the efforts of a team pursuing a championship. Even if it means keeping him away, letting him sit at home. And as the season progresses, a playoff hopeful might decide that Simmons is a piece that could make a difference. Waiting this long has already been disastrous for Philadelphia. Can Morey afford to risk letting it possibly get worse?