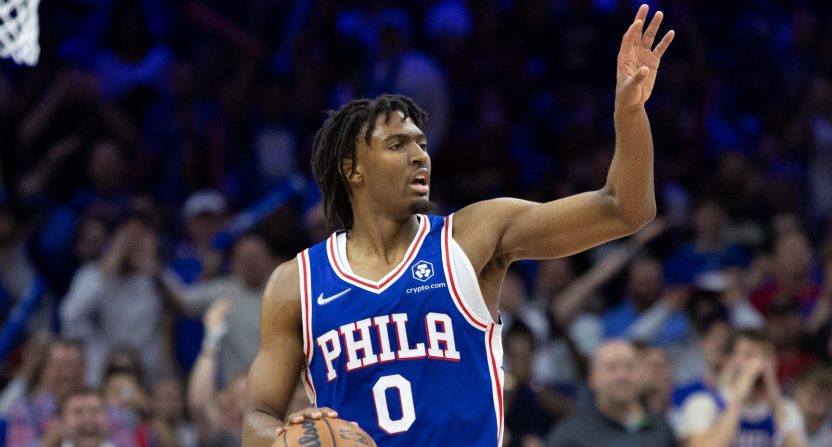 The Philadelphia 76ers seem to have a budding star on their hands in third-year guard Tyrese Maxey. Unfortunately for them, he went down with what seems to be a serious foot injury on Friday against the Milwaukee Bucks.

The injury occurred early in the second half of Friday’s game, when Maxey landed awkwardly on his left foot while being guarded by Bucks guard Jevon Carter.

Tyrese Maxey injured his left foot on this play in Friday's game against the Bucks.pic.twitter.com/F4fvfHbXUR

He did not return to the game, and we now know the severity of the injury after an MRI conducted by 76ers doctors on Saturday.

According to ESPN’s Adrian Wojnarowski, Maxey is expected to miss 3-4 weeks with a small fracture in his left foot.

This is certainly a big blow to the 76ers, and fans took to social media to express their disappointment with this diagnosis for Maxey.

He can have mine https://t.co/gTHOBVgAP2

Maxey was playing so well last night before the injury. https://t.co/h8ScooCyil

Devastating. The Philly sports heater is definitely over. It’s back to being soul crushing like normal. https://t.co/FSqUwz4pdf

Philly will now be without both of its star guards until James Harden is able to come back. Harden said this week he’s on pace to return on schedule, which should be sometime in early December. https://t.co/cSxmtUYNvP

The 76ers guard depth is really being tested this season. https://t.co/M1cfU15fLn

This could not have come at a worse time for the 76ers, who are also without James Harden for the time being after he suffered a foot injury as well earlier this month.

It can not be understated how impactful Maxey has been for Philadelphia thus far this season.

He is currently averaging 22.9 points per game while impressively shooting 42.2 percent on three-point attempts on the season.

Tyrese Maxey appeared to be an early candidate for the most improved player award in the NBA this season, but this injury could certainly derail that possibility.

His absence will also put even more pressure on star center Joel Embiid to carry this 76ers team, which is no easy task to do without two key players in Harden or Maxey.