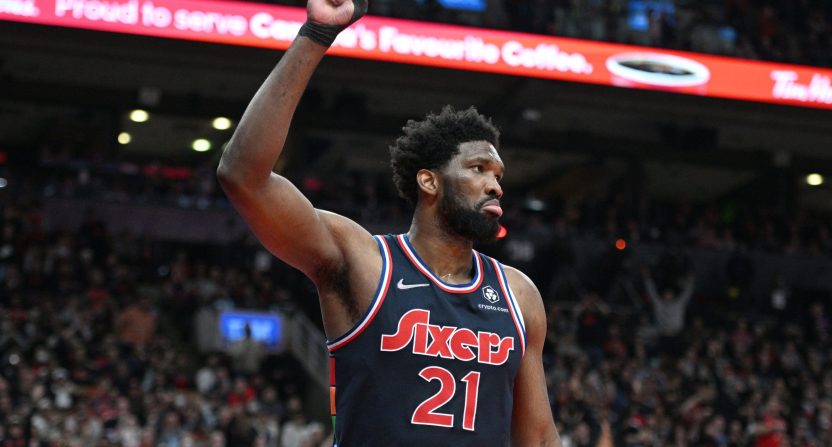 The Philadelphia 76ers are desperate in need of Joel Embiid. After suffering a concussion and an orbital fracture at the end of a blowout win against the Toronto Raptors, in addition to Embiid’s previous thumb ligament tear he was playing through, the Sixers are down 2-0 to the top-seed Miami Heat. Given the Heat won by 14 and 16 points respectively, the Sixers are missing their MVP candidate.

The Sixers got a bit of good news as Embiid cleared concussion protocol and participated in shootaround. While he’s still listed as “out” for Friday’s Game 3, The Athletic’s Shams Charania reported that “Embiid is doing everything possible to be available to play in Game 3.”

76ers All-NBA star Joel Embiid has cleared concussion protocols. Dealing with orbital fracture and a torn ligament in thumb, Embiid is doing everything possible to be available to play in Game 3 tonight vs. Miami.

There’s optimism Philadelphia 76ers star Joel Embiid will return tonight in Game 3 vs. Heat, sources tell @TheAthletic @Stadium. He has been fitted for a mask and will need to feel comfortable before green light. One of the NBA's great play-through-pain efforts recently.

It is going to be a race against time. Even if Embiid is healthy enough to come back for Game 3, it still might be too little too late. If he doesn’t come back until Game 4, it’ll be even more dire for Philly. Regardless, you can’t question Embiid’s motivation to get back to the court.

@JoelEmbiid CITY IS WITH YOU IM READY TO RUN THROUGH A WALL FIRE ME UP @1kalwaysopen_ BRING US IN🛎🛎🛎🛎🛎🛎🛎 https://t.co/MeirXE7ldk

Currently saying a prayer for Joel Embiid's broken orbital bone so he can play tonight. My mental health depends on it. https://t.co/6c3gtaEjWz

If Embiid really wants to make an entrance do the James Brown cape revival during player intros. pic.twitter.com/4JBVib9nkS

We all know Embiid is tweeting this gif at some point around 5:30 tonight pic.twitter.com/OONEV4tQqj

Embiid gonna be out here like this just tryna win you gotta respect it https://t.co/lZxoH4Oxif pic.twitter.com/CVKGK4kAbx