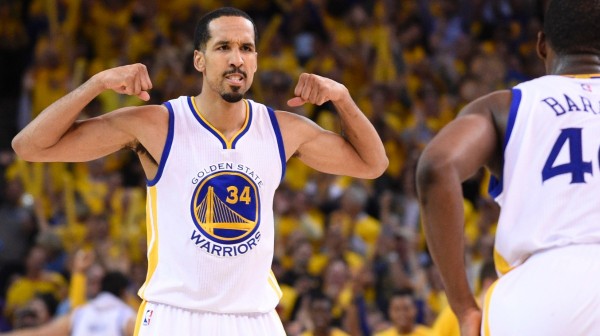 Game 1 of the NBA Finals went in the Golden State Warriors’ favor, despite Steph Curry and Klay Thompson combining for just 20 points, their lowest combined total in the past two seasons. Instead, it was the heroics of their bench, specifically Shaun Livingston, who led the team with 20 points, a playoff career-high.

Leandro Barbosa led the bench charge early in the game, as he ignited the Warriors and the Oracle Arena crowd in the second quarter with seven points in 4 minutes and 42 seconds of game time. His speed, along with great decision-making, has helped the Warriors bench be so deadly all season, and it showed in Game 1. He was able to drive on Matthew Dellavedova for a pair of well-contested buckets at the basket, and knocked down a wide-open three to put his team up 11, as well as put the Cavaliers on their heels.

Another huge effort off of the bench — but on the defensive end — was Andre Iguodala, who was a nuisance all night for Cleveland. Iguodala made a huge impact on the NBA Finals last season because of his defensive effort on LeBron James, and he showed much of the same in Game 1.

On plenty of occasions, Iguodala would be bodying up LeBron James, Kevin Love, or Kyrie Irving. Iguodala was able to take perfectly-timed swipes at James and Irving on offense, creating turnovers and helping his team create fastbreaks, which the Warriors have destroyed teams on all season. You could see the frustration at times by James and Irving. Having players on your team to provide that for you is something you can’t measure in the box score.

Here, Iguodala catches James and Irving on back-to-back possessions, leading to two fastbreaks, one that resulted in a basket:

But it was the fourth quarter display put on by Shaun Livingston that really pulled the Warriors past the Cavaliers. Livingston has been a great piece for the Warriors ever since his arrival last season. While he won’t give you games like this often (because he doesn’t need to), they aren’t surprising when they do happen. Livingston’s size, floor vision, and basketball IQ make him an extremely effective point guard off the bench, and the Cavaliers found that out Thursday night.

Livingston was able to score on anybody that the Cavaliers presented to him. Faced with Kyrie Irving, Tristan Thompson, or whoever the Cavaliers threw at him, he was able to handle it. With Irving and the smaller guards, Livingston had a great size advantage with his 6’7″ frame. Against the Cavaliers’ bigger guards and forwards, he had quickness on them, while not giving up too much in height.

On this shot, Livingston is contested by Kyrie Irving, but his height advantage allows him to get enough space for a good look in the lane between the free throw line and the block, where he thrives:

The Cavaliers didn’t play their best game. Kyrie Irving shot just 7-of-22, and Kevin Love 7-of-17. At the same time, LeBron James didn’t have an exceptional game, but he was aggressive early on. The Warriors defense just simply made things tough on him, especially Andre Iguodala. J.R. Smith was also very quiet for the Cavaliers, taking just three shots for the entire game. For the Cavaliers to have success in this series, that cannot happen, because you don’t know what you’re going to get from Kevin Love night in and night out, in addition to the bench being a crapshoot. Their bench took just 10 shots total, while the Warriors’ bench made 19 shots. No matter how great your starting lineup might play any given night, that impact is huge.

Don’t expect to see the same team from either side show up in Game 2. Curry and Thompson will absolutely look different, after shooting 27 and 33 percent respectively. The Cavaliers should be happy with their defensive efforts on the two, as they contested most shots, and were able to make things difficult on most possessions. If you’re the Warriors, seeing Curry and Thompson both make threes on back-to-back possessions late in the fourth to fight off one final Cavaliers push was promising.

We don’t know what will become of J.R. Smith and the Cavaliers bench. Those two factors are about as unpredictable as they come in regards to this series. Smith had a poor showing in last year’s Finals against this team, and the bench was very thin. The Warriors showed different use out of their bench that they had for the most part of the Western Conference Finals, and changes will undoubtedly be made by both teams, just as we saw last season.

It’s easy to overreact to one game, but Game 2 will be more telling in how this series will develop. Regardless, the Warriors should feel very confident in how they opened up the series despite the Splash Brothers having the worst combined night they’ve had as teammates in their dominant past two years of basketball.