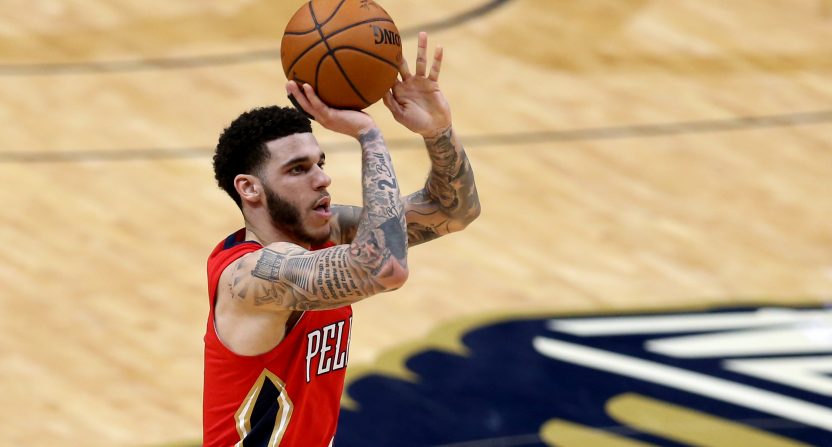 With the trade deadline approaching, injuries have marred the NBA landscape. The Los Angeles Lakers will be treading water for the foreseeable future with LeBron James and Anthony Davis out. The Philadelphia 76ers, led by the perennially underrated Tobias Harris, are making due quite admirably without Joel Embiid. The Charlotte Hornets just lost star rookie guard LaMelo Ball for most, if not all, of the season with a fractured wrist — a devastating injury if he’s unable to return.

The middle of the Eastern Conference, where Ball has helped lead the Hornets, remains a muddled mess. Outside of the top three (the Sixers, Brooklyn Nets, and Milwaukee Bucks), no one feels like a particularly great contender. The 4-8 spots are roughly even, with the Chicago Bulls and Indiana Pacers in the process of locking down the play-in spots. Unlike the West, where the usual dogfight is taking place, the East is uneven.

Let’s run through these teams and check on their prospects for contention, in addition to some trade deadline discussion:

After a meandering start to the year marred by various absences, the Heat are back in the thick of things, with Jimmy Butler playing at an All-NBA level. Since February 1, they have the best defense in the NBA, with a 107.1 defensive rating. Butler is averaging 21 points, eight rebounds, and seven assists while playing superb defense.

Whether they can reach their bubble level is another matter. Tyler Herro, a star of that run to the Finals, has struggled this year, shooting just 31 percent from three a year after shooting 39 percent on similar volume. Most impact stats have him as a minus this season, and his net rating is in the negatives. Duncan Robinson’s three-point efficiency has also dropped, though he is still shooting 38 percent on ridiculous volume.

To help their depth, the Heat traded for Trevor Ariza, a veteran three-and-D guy, and might still be in the market for more help. They’ve relied on younger players for minutes off the bench for much of this season.

The red-hot Hawks, led by interim coach Nate MacMillan, have re-entered the playoff race. They’re 8-2 in their past 10 games, with players like Bogdan Bogdanovic returning from injury. Danilo Gallinari is back up to 40 percent from three after a cold start to the season. They’re still missing DeAndre Hunter, who had been playing great before his injury, but the Hawks seem to have stabilized.

To be fair, their run has come against a pretty easy schedule. After beating a Jimmy Butler-less Heat team, they feasted on the Orlando Magic, Toronto Raptors, Sacramento Kings, Cleveland Cavaliers, Houston Rockets, Oklahoma City Thunder, and skeleton Lakers, before an entertaining loss to the (mostly) full-strength Los Angeles Clippers. While that run will give the team confidence and the fanbase hope, it may not be the long-awaited breakthrough that secures the Hawks a top-five seed. With more games coming against the Western Conference, they will fall back to earth a bit.

Regardless, the Hawks should be thrilled that they’ve dug themselves out of their early hole. They really wanted to make the playoffs this season, and it seems that they will be able to do that. The question now is whether they deal John Collins before the trade deadline. Barring a mega-offer or a valuable win-now asset, it might make more sense to ride it out and decide on a max extension this summer for the restricted free agent.

The frontcourt of Collins and Clint Capela provides defense, shooting, and size. The Hawks have been better this season with both on the floor, with Capela’s defense a big reason why. With Capela on the court, Atlanta’s defensive rating is just 107.0, a number that would rank second in the NBA overall. Collins is averaging 18 points per game with a 59 percent effective field goal percentage, including 37 percent from three. Capela is the best rebounder in the NBA and a fleet-footed rim runner. The two pair well, and their size compensates for their undersized lead guard, Trae Young.

Perimeter defense remains a weakness (Kris Dunn’s impending return will help). They may be active at the trade deadline even if they don’t trade Collins, as there have been rumors that they could grab Lonzo Ball from the New Orleans Pelicans for Cam Reddish. Ball is young and can defend, shoot, and pass, making him a good fit next to Young and a perfect backup point guard, which has long been a sore spot for the Hawks. Reddish has struggled and could benefit from a change of scenery. Atlanta should think seriously about making that move if the Pelicans are interested.

Ball’s injury hurts. But it’s not the end of the world for Charlotte, who have more excitement surrounding the franchise than they’ve had in a long time. They’re already deep at guard, with Devonte’ Graham recently returning from injury. Terry Rozier has had a great season and could go off at any time. Malik Monk, always an exciting player, re-entered the rotation to provide shooting and some high-flying adventures. The Martin twins provide some competent minutes — Caleb as a backup ball-handler, the more effective Cody as a solid perimeter defender.

Add in Gordon Hayward’s playmaking and the Hornets should be able to stay afloat without Ball. They were sixth in the East at 21-21 entering Tuesday’s games, a good five games ahead of 11th-place Toronto and 2.5 ahead of ninth-place Chicago. They unfortunately lose much of their small-ball capability now that they lack Ball’s size at guard. That will expose their weakness at center, which has been a problem all year.

Charlotte has been reported to be sniffing around big men, including Indiana’s Defensive Player of the Year candidate Myles Turner, but it already didn’t make sense to sacrifice future assets for help at the five before Ball’s injury (if they want a smaller-scale upgrade, Memphis might buy out Gorgui Dieng). With a reasonable remaining schedule, the Hornets have a good chance to make the playoffs even if they don’t make a significant trade.

Despite a pair of recent close losses to the Sixers, the Tom Thibodeau Knicks are doing pretty much what we’d expect them to do: run their starters big minutes and play stifling defense. Julius Randle is second in the league in minutes per game, and the Knicks are fourth in defensive rating.

They should refrain from unnecessary moves at the deadline. No, Thibs, you do not need Andre Drummond (Nerlens Noel is a good backup center!).

Something to watch: RJ Barrett and Julius Randle are both in the midst of great offensive stretches, with scorching three-point percentages (both in the 40s over the past 15 games). Randle has not stopped passing the ball at a high level — he had 18 points and 17 assists in a recent win over the Magic despite the Knicks only scoring 94 points as a team.

Nothing has really been easy for the Celtics this year. They’re all the way back in eighth, just a game and a half out of the play-in tournament (they’re also just a game out of fourth-place). As ever, they’re great with Jayson Tatum and Jaylen Brown on the court, posting a plus-5.6 net rating when they play together. But when Tatum, Brown, or Kemba Walker plays without another of the stars, the Celtics get blown out. They lack NBA-quality depth, a problem that was exacerbated when Marcus Smart got hurt.

It’s a good bet that Boston will be active in trade talks. They’ve been linked with all sorts of players. Smart is their most tradeable commodity, so despite his proven value as an elite defender and glue guy, there’s a case to be made that the Celtics should use him to bring in a guy like Harrison Barnes or Aaron Gordon. Their most urgent task should be trying to turn a young player or two into quality bench depth.

Barnes makes a good amount of sense as a higher-end option. In the midst of a career season, Barnes is doing more off the dribble than he ever has before, in addition to providing shooting and defense. He could prop up second units in addition to starting alongside the three stars and Daniel Theis. Trading Smart for Barnes, if the Sacramento Kings are interested, would be tough, but it’s something that Danny Ainge should seriously consider.

With the underperforming Pacers lurking, a true upgrade at the deadline might be what it takes for the Celtics to overcome this mess of teams in the middle of the Eastern Conference.

These sports now join the other NCAA-sponsored sports in providing a one-time free transfer without the need to sit out a year. However, schools and conferences can still put some restrictions on where athletes can transfer.

The quarterback that the San Francisco 49ers draft with the No. 3 overall pick will enter a great situation for success.

These sports now join the other NCAA-sponsored sports in providing a one-time free transfer without the need to sit out a year. However, schools and conferences can still put some restrictions on where athletes can transfer.

The quarterback that the San Francisco 49ers draft with the No. 3 overall pick will enter a great situation for success.