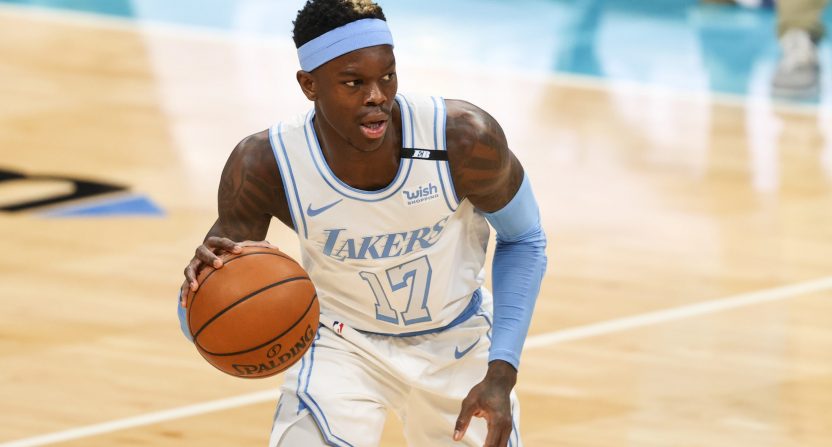 We saw in last year’s NBA Playoffs how much impact individual role players can have. The Los Angeles Lakers, which heard concerns about their depth all season, saw a rotating cast of players perform at a high level (especially Rajon Rondo). The Miami Heat made the Finals on the back of a collection of non-star players.

This year’s playoffs are shaping up to be more wide open than last year. As many as eight teams count themselves as having championship aspirations this season, depending on how you feel about the Denver Nuggets without Jamal Murray.

We won’t get to all eight of those teams, but here’s a selection of non-star players who could prove crucial in the biggest games. These players could prove the difference between a championship and a playoff exit for their teams:

There are signs of that production perking up, though. Since LeBron James’s injury on March 20, Schroder is putting up 17 points and 7.8 assists while shooting 40 percent from three. He’s still shooting too many mid-range shots, hurting his overall efficiency — he shoots just 35 percent from floater range, 3-10 feet from the hoop — but he can score at the rim and create off the dribble.

To reach their full potential, the Lakers need Schroder to be their clear third-best player. That means keeping the offense afloat when LeBron sits (that hasn’t happened in the regular season) and shooting consistently well from three. His 38 percent mark on catch-and-shoot looks is promising. He also has to be a high-volume playmaker the way Rondo was in last year’s playoffs.

We know Schroder will defend at a high level. He’s a very solid point guard defender who’s been an important part of the Lakers’ dominance on defense (they’re still, astoundingly, the top defense in the league). It’s on offense, where he’ll be the primary non-LeBron perimeter threat in the playoffs, that the Lakers need him to work.

One of the most interesting questions that Suns coach Monty Williams will have to answer in the playoffs is how much he’ll rely on backup center Dario Saric. Given Saric’s production, and his ability to stretch the floor on offense, there have been times this season when Williams has gone to Saric in clutch time instead of the starter Ayton.

Ayton has made clear strides in his third season. He’s a legitimate rim protector, with one of the heaviest volumes of defensive field goal attempts against, and he’s holding opponents to 44 percent, better than almost every rim protector except Rudy Gobert and Myles Turner. He’s also shooting considerably better from the field and making better decisions from the post.

There’s certainly some noise to those numbers — Saric plays a lot more against bench lineups rather than starters, for one, and on-off numbers can be inherently fluky. But while Saric isn’t exactly a sharp-shooter (33 percent from three this year), he can space the floor as a willing pick-and-pop threat, and he’s mobile on defense.

Ayton has been productive as a roll-man, benefitting from the genius of Chris Paul. He’s also been a lot more selective with those unproductive jump shots he had a tendency to settle for in the first two years of his career. It’s on defense, where playoff teams will test him, that he’ll have to perform. A title-winning Suns team probably needs Ayton to be a dominant rim protector who doesn’t get burned on switches. He may also get to do battle with Nikola Jokic if the Suns end up playing the Nuggets.

If Williams wants an offensive boost, though, Saric hasn’t proven to be a huge defensive downgrade. That could create some interesting decisions when the Suns are playing important minutes.

I included the Bucks in those eight teams that have legitimate championship aspirations. Milwaukee feels a bit under the radar this year, particularly given that they’re third behind Brooklyn and Philly in the East, but they’re 37-23 despite the various injuries and absences they’ve had to endure. With three legitimate stars, they should be better in the biggest moments than they were last year.

The constant dilemma for Milwaukee, aside from trying to maximize Giannis Antetokounmpo in the playoffs, is deciding what their closing lineup looks like. They have to balance defense, ball-handling, and shooting. The starting lineup of the three stars plus DiVincenzo and Brook Lopez seems like the most obvious candidate. But would they be better off going with PJ Tucker over Lopez, to provide more seamless spacing and let Giannis essentially play the five? Tucker is also more switchable, giving them a different dimension as they can’t rely so much on their drop coverage.

I highlight DiVincenzo because of the issues that they ran into when they lost in the playoffs in the past couple of years: they didn’t have enough reliable shooting and off-the-dribble creation to take the offense out of its funks. The Bucks could get bogged down around Giannis, with the role players relegated to spot-up duty. DiVincenzo didn’t have the same role then; he played just 19 minutes per game. This year, he’s started all 55 games and averaged 27 minutes per game.

DiVincenzo is a good shooter and defender, but can he provide any spark to keep the offense moving? He’s shooting just 46 percent on two-pointers. They ran into problems in previous playoffs when Eric Bledsoe struggled, which is why they were willing to pay three first-round picks to upgrade to Jrue Holiday. The departures of Bledsoe and George Hill likely leaves a spot for DiVincenzo in heavy minutes. The role players are particularly important for Milwaukee.

With LaMarcus Aldridge forced to retire due to a heart condition, the Nets are short on big men. That could make things difficult if they end up running into Joel Embiid and the Sixers.

If everyone’s healthy, Brooklyn is the championship favorites regardless. They might not need to stop the other team. But if something goes wrong, and all three of their stars have missed time this season, they may not be able to afford catastrophic defense. DeAndre Jordan and Blake Griffin are big bodies who aren’t mobile enough to be plus defenders at their positions. That makes Claxton a particularly interesting player to watch. He’s a good big-man defender whose athleticism makes him a lob threat on pick-and-rolls.

Claxton is a tad skinny, so it’s possible that Jordan would spend more time wrestling with Embiid in a potential Eastern Conference Final. But Claxton’s mobility on switches is a legitimate asset. He can hang with guards on the perimeter, an important skill in the Nets’ ultra-switching scheme. The 22-year-old might end up playing incredibly high stakes minutes.

Also, let’s add another Nets role player: Jeff Green, who could be used as a small-ball five if the situation calls for it. He has also had a fascinating career.

Any time NBA history is happening, Green seems to be around somehow. He played for the SuperSonics, and teamed with Kevin Durant, Russell Westbrook, and James Harden in Oklahoma City. He played with the late-stage Celtics big three, the Lob City Clippers, and the Grit and Grind Grizzlies. He was a teammate of LeBron in 2018 with the Cavs in the Finals, and spent last year playing small-ball with the Rockets. Now he’s an important part of the Nets super-team.

There’s a reason he’s omnipresent — he’s a very solid basketball player, a competent and willing shooter, stout multi-positional defender, and capable off-the-dribble bucket-getter. His size and defensive acumen makes him an attractive Death Lineup-type of option. They could play the three stars alongside Joe Harris and Green, and go absolutely supernova on offense. That lineup has actually played 76 minutes this season, with an offensive rating of 125.6.

The Nets have a lot of options, none of them perfect. They have good reason to hope that the stars, provided good health, will overcome whatever problems they run into.