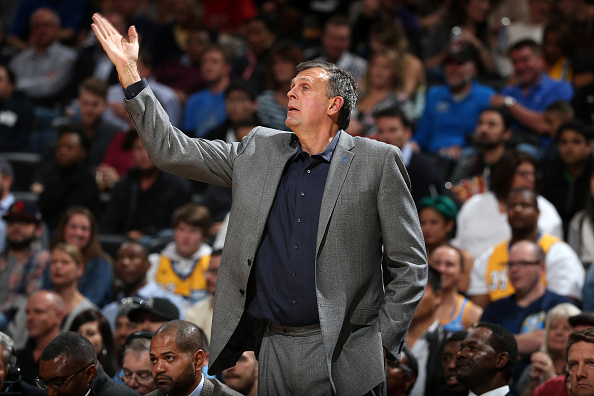 Game 3 of the NBA Playoffs’ first round begins Thursday night with the Philadelphia 76ers visiting the Miami Heat at 7 p.m. eastern on TNT. Brian Anderson will be on the call alongside Kevin McHale and Rebecca Haarlow. On his way to the arena, McHale spoke with Awful Announcing about the Boston Celtics-Milwaukee Bucks series he’s analyzed for TNT, how playoff basketball has changed since his playing days, his potential future as an NBA coach and more

Note: This interview has been edited for length and clarity

In watching the playoffs now as an analyst, what are the biggest changes you’ve seen in the play in the postseason since your playing days?

In the playoffs, the intensity picks up, the defense gets better, you make adjustments. You’re not playing 82 games, you’re playing one team every other day. That’s all been similar. The style the game is played has changed, but that style of play has changed for 82 games, too. It’s much more of a pace and space, wide open, shoot so many more threes. But the actual preparation in how you prepare, the game-to-game adjustments, all of that is the same exact [way] as when I played. It’s just that the style has gone from much more of a interior, post-up, attack, get to the paint, get fouled, blocked shots, rebound, more of a paint game, to a 3-point game, a drive and kick game. But everything else is the same.

There’s definitely that pace and space style during the 82-game season, but in the 4th quarter of these playoff games, do you still see possessions go to that one-on-one, isolation game that we saw when you were playing and in the 1990s?

Well, some teams go to one-on-one. I think at some point, your top players have to have space. Let’s take New Orleans, okay? They have a lot of action going on on both sides, but all that action gives Jrue Holiday an opportunity to attack. All that action gives Anthony Davis some room to attack.

So all the good teams like in Boston, I did those games. They have multiple actions. They turn the ball from side to side. They attack. It gives everybody an opportunity that if they see something, they can drive. Jaylen Brown makes unbelievable drives for Boston.

Yeah, you’re gonna have to make some tough [shots] one-on-one. Once the [shot] clock gets down to five, six seconds, which happens. Teams play good defense, you bobble a pass or you don’t get a shot up early when you have one or whatever, someone’s gonna have to make a play. Marcus Morris has made some big shots for Boston, breaking guys down one-on-one.

But there’s always gonna be times when someone’s gonna have to make a play, and that’s why the top players, the LeBron Jameses of the world, these guys are able to drive their teams to win is because they can make big plays when they need to.

You called the first two games of Boston-Milwaukee and I’m sure you watched film of the first two Philadelphia-Miami games. What do you think the biggest factors have been in those series so far?

In the Miami-Philly series, it was Miami’s defense in Game 2. Philly just ran them out in the second half of Game 1. It was a clinic. They scored 75, 78, whatever the heck they scored [it was 74] in the second half, and it was just an absolute clinic. And you could see [Miami’s] Coach Spoelstra did not like that much, and his guys got out and got physical, they pushed Philly out. So it’s a tale of, really, two games.

In Game 1, Philly had their offense running at such a high level, generating open threes and everything else that they do. In Game 2, Miami just went out and put in one of the better defensive efforts you’re ever going to see.

In the Boston-Milwaukee series, it’s just the strength in numbers with Boston. They’re consistent, they move the ball, they’ve got four, five guys all getting 15 [points] or more, 15 to 25. Brown’s been spectacular, Terry Rozier’s been spectacular. And Milwaukee can’t find other people to score. Giannis Antetokounmpo and Khris Middleton have been really good and Malcolm Brodgon has been solid in shorter minutes, he got hurt and didn’t play much at the end of the regular season. But Milwaukee can’t find that third and fourth guy to go along with Antetokounmpo and Middleton. Whereas in Boston, the style of play and how they move the ball, everybody has an opportunity and the guys take advantage of those opportunities.

I’m looking forward to tonight’s game. Is Philly gonna be able to kind of impose their push-it-up and attack style and let Ben Simmons create. Or is Miami gonna go out there and run those 3-point shooters [of Philly], J.J. Redick, Marco Belinelli, Robert Covington, off the line? And now all of a sudden, now you’re making Dario Saric and all these guys make plays. It’s interesting, because I don’t think that Miami’s got the firepower to get into a shootout with Philly. But yet Miami’s got some gritty, tough guys.

Dwyane Wade’s performance in Game 2, when he may be past his prime now and he still played the way he did…

I was trying to be nice!

I’ll tell you what, I think Dwyane will tell you that. He’s not the player he once was at 25. It’s physically impossible. But what he did was really fun to watch. I enjoyed it. I enjoyed watching it. I was happy for him. Man, you could turn the clock back every once in a while, but you just can’t keep it at that turn-back dial. I hope he plays well. You could also turn it back for a week or two weeks at a time, it’s just hard to do it all the time. I was really happy for him. He had two huge hoops that when Philly was making a run back at them, that I thought were momentum stuffers and a huge confidence boost for that Heat team.

What I was going to ask was, did that remind you of a performance you may have had in the postseason when you were past your prime?

Well, I knew I was going to retire at the end of my last season [1992-1993] against Charlotte [in the playoffs]. I was able to play well offensively, I was able to score the ball. Even when I was kind of older and beat up, I could always score the ball. I played about as well as I could, considering I was playing on one foot, beat up. But you couldn’t defend, you couldn’t block shots, you couldn’t lock down on the other end. You just couldn’t impact the game as much as you once normally did, you know? And that was always frustrating.

Being able to impact the game on both ends was always something that I liked to do. So yeah, I turned back the clock for 10, 15 days in my last playoff series. It just wasn’t good enough, and I wasn’t enough at that point to lock down their top scorers and get our guys to say ‘I got this guy’ and all that.

How has going back to broadcasting been for you? What’s that been like?

It’s fun. I enjoy the games, I enjoy the great vibe in the arena. Tonight in Miami, they’re usually pretty laid back, but this is a playoff game and the series is tied 1-1. It’ll just be a great vibe in there, and it’s fun. And I like to see all the adjustments that teams make and stuff. So, it was fun being up in Boston and hanging around in the afternoon with Danny [Ainge] and his staff and Danny’s son Austin and just talking about all sorts of stuff and adjustments. So it’s fun. I still love basketball.

You see it’s kind of silly season with all these rumors about head coaching openings and whatnot. Do you miss coaching?

There’s aspects of coaching that I do miss. I love the competition. I love the plotting and planning and trying to put players in the right position, and trying to get an offense that really fits your team. Insight on how you have to play to generate threes and getting fouled and attacking and spacing and pace, all that stuff. Everybody’s offense is a little bit different because you have to tailor it to your players. So those are always a lot of fun.

The draining, tough losses, all that stuff, no one looks forward to that. That eats away at you as a person, that stuff.

Would you be interested in going back if a team contacted you?

It would have to be the right team, where you could win, have fun, enjoy it. It’s gotta be one of those teams that’s kind of on the rise, that you look at and think ‘boy, this team can really do something and have fun.’ But like a rebuild type thing, going 20-62, oh my word. That’d be like fighting Mike Tyson in his prime, just getting hit in the head too much.

Last question: If we were to fast-forward two years from now, would you say you’d be a head coach in the NBA or would you be a broadcaster?

Oh, I honestly have no idea. I would say broadcaster.