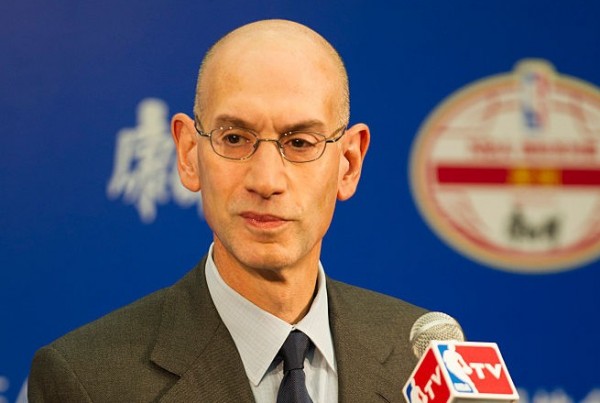 Adam Silver has made it clear he’s not a fan of tanking in the NBA. He took steps to try to stop teams like the Philadelphia 76ers from doing so by introducing lottery reform last year, which failed to pass. He appeared on FiveThirtyEight’s “Hot Takedown” podcast and admitted while teams are free to do what they want, he wasn’t a fan of the strategy teams like the 76ers took.

Adam Silver is not a fan of the Sixers' strategy: https://t.co/KjzhPCX3DY pic.twitter.com/Q8RKW8GClx

“Neil Paine: Are you personally, as the commissioner, OK with the way that the 76ers have run their franchise the past three seasons?

Adam Silver: I don’t want to answer that directly. As I said, there’s a marketplace of ideas and approaches that go into managing a franchise.

Am I fan of that strategy? Put it this way: No. But does that mean that it’s not acceptable under the league rules? It doesn’t.”

Silver denied that he intervened with the 76ers and forced them to hire Jerry Colangelo, although he admitted he had conversations with 76ers owner Josh Harris and helped him come to the decision.

Those reports are not correct. Josh Harris, who’s the principal owner of the 76ers, decided on his own that he needed to change course. He and I had many conversations along the way about the utility of the strategy that he was following. And he came to the conclusion once this season began, and he saw how his team was performing on the floor, that he needed to change his strategy.

Other owners were not pressuring him at all. In fact, it’s a weird dynamic in the league that while all the owners would like to see teams well operated, other owners just want to win (laughter). And so nobody was calling me and saying go call the 76ers and tell them how to beat us.

Silver wants to have a competitive league, and teams intentionally tanking takes away from both the fan experience and from the league’s bottom line. It comes as no surprise he’s not a fan of teams bottoming out or that he had something to do (even if it wasn’t “intervening”) with the 76ers hiring of Colangelo. He, like the fans in Philadelphia, want to see the 1-28 76ers be a competitive team – even if that’s still years away from coming into fruition.