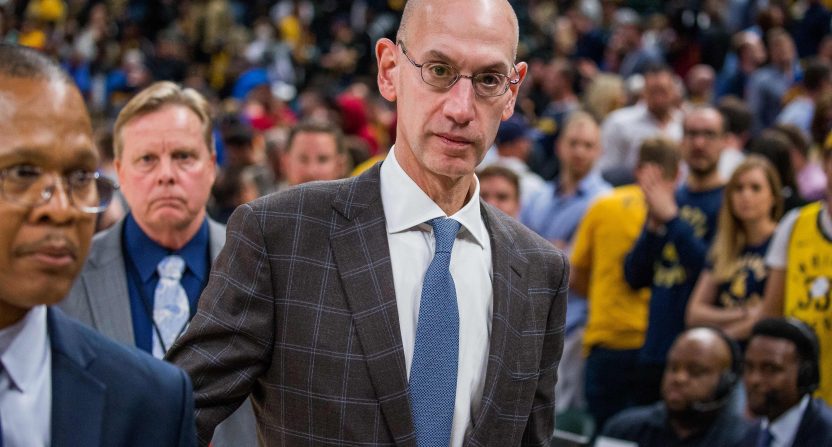 While COVID-19 cases are on the rise across the U.S. in general and in Orlando in particular, the NBA is still planning to resume its season in Orlando in early July, with 22 teams set to travel to the “bubble” there beginning July 7. But Tuesday saw NBA commissioner Adam Silver offer perhaps his strongest suggestion yet that the league’s planned postseason tournament may not wind up finishing.

“[It’s] never ‘full steam no matter what,’” says Silver in a Talk that aired Tuesday. “One thing we’re learning about this virus is that much is unpredictable.”

Even if the teams make it to Orlando, Silver recently said that a “significant spread” of COVID-19 at the Disney World complex could cause a cancellation of the 2019-2020 campaign, even if it relaunches as expected in late July. The season initially came to a halt on March 11 after Utah Jazz center Rudy Gobert tested positive for the novel coronavirus.

But what would constitute a “significant spread?”

“Honestly … I’m not sure,” Silver says. “We have a panel of scientists, doctors, experts that are working with us. We’re going to see as we go.” The NBA, he says, will be constantly monitoring the data. “Certainly, if we have a lot of cases, we’re going to stop,” he says. “You cannot run from this virus. I am absolutely convinced that it will be safer on this campus than off this campus, because there aren’t many other situations I’m aware of where there’s mass testing of asymptomatic employees. So in some ways this is maybe a model for how other industries ultimately open.”

There are still questions about those “safer on this campus” remarks, given the travel involved in getting to Orlando and the amount of interaction players will have both amongst thems+elves and with staffers and Disney World employees (who will not be kept in the bubble) once there. And that’s especially true when the alternative is players just staying at home and contacting few to no others. But it is interesting to see Silver really addressing the idea of calling this event off partway through.

Yes, Silver doesn’t provide any threshold for that other than “a lot” of cases. And that threshold may wind up being pretty high considering the money at stake for the league and its broadcast partners. But it’s certainly notable to hear the NBA commissioner say it’s not “full steam no matter what,” and that they’ll be constantly monitoring what’s going on case-wise. So even if this NBA resumption does get underway as planned, it’s notable that the league is already considering the possibility that it may not finish as planned.