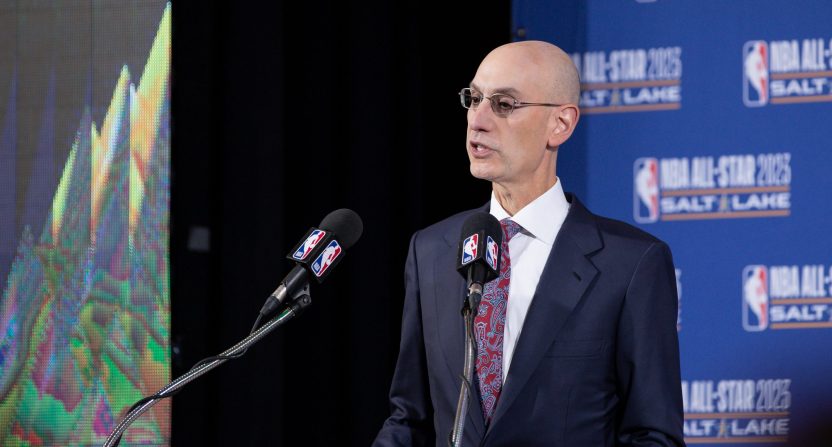 NBA commissioner Adam Silver spoke on a conference call with players on Friday, providing updates on the strategy for hopefully restarting the 2019-2020 season that has been paused due to the COVID-19 pandemic.

Silver reportedly told players that the season decision could carry into June, according to The Athletic’s Shams Charania and ESPN’s Adrian Wojnarowski. If there’s a season, it’s not expected to include fans in attendance.

– If season resumes, no fans expected
– 40% of league revenue comes from fans
– Season decision can go into June
– Until coronavirus vaccine, there is risk; will be living with the virus for foreseeable future

Silver also explained how it “would be safer to be in a single location, or two locations, to start.” Las Vegas and Orlando appear to be the main cities being considered as host sites.

Sources: On call with players today, Adam Silver told NBPA membership: 1) "It would be safer to be in a single location, or two locations, to start." 2) That the NBA doesn't have to make a decision on re-starting in season in May, nor does it have to decide right away in June.

If/when it is able for NBA to return, Adam Silver told players it’s safer in 1-to-2 locations — such as Disney World Orlando/Las Vegas — than flying around to cities and facilities, sources said. https://t.co/n33I0YKu19

Additionally, the commissioner told players that the league hopes to be able to have seven-game playoff series in each round, and that the series could move faster if played at a single site.

Sources: Silver told players that he still hoped that the playoffs would include a 7-game series in every round. He told players that those series could move faster without the need for travel, staying in a single site. Orlando and Vegas still tops.

One aspect that tends to be forgotten about a season restart is the need for players to get back into game shape. Silver told the players that “three weeks” is the minimum length being discussed for a training camp.

Asked on NBPA call about how long a training camp could be should this season resume, Silver suggested "three weeks" as the minimum length that's been discussed within the league, sources said.

Wojnarowski reports that some players vocalized their concern about feeling pressure to return to volunteer workouts, and Silver said he’d address this with the organizations.

Some players told Silver that they were feeling pressure from organizations to return to volunteer workouts at facilities, and Silver said he'd address it with teams, sources said. https://t.co/bwrOWwwR2z

And what if the NBA season resumes, but a player tests positive for COVID-19 (after all, it’s what started this whole thing in the sports world)? Silver told players that the league would hope for daily testing by the time that happens, and there would be no stoppage of play.

Sources: On the ever-elusive question — What if a player tests positive upon return — Adam Silver told players the NBA would hope for daily testing at that point and no stoppage of play, having the player(s) isolated in quarantine.

There’s still a lot to figure out for the NBA on restarting a season, and it’s all still a big “if” at this point amid the pandemic. But the league clearly has a (loose) plan in place, and now the players are aware of the details. And the players reportedly appreciated how candid Silver was on the call.

Among players on the call, there seemed to be an appreciation that Silver was trying to answer questions as candidly as he could — especially given the uncertanties facing league and country with virus. https://t.co/a47PTrWvET

All the best reporters are relaying all the details of today’s NBA player call with Adam Silver and Michele Roberts. All I have to add is two different players said to me: “Adam Silver is a real one. He’s a good dude who wants the best for all of us. He’s a great leader for us.”